Analytics and trading signals for beginners. How to trade EUR/USD on August 26. Analysis of Tuesday deals. Getting ready 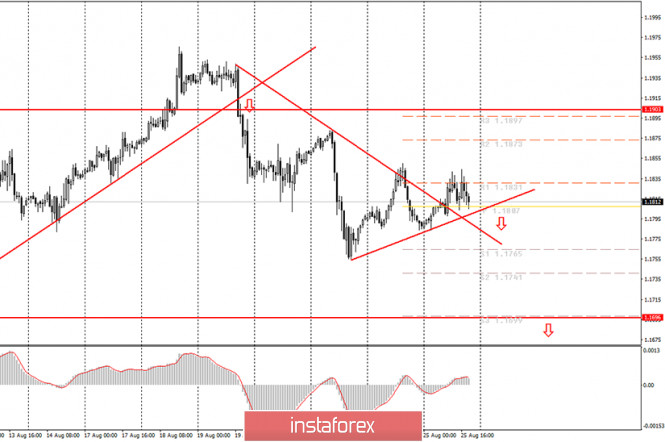 On Tuesday, August 25, the EUR/USD pair continued to move slightly higher supported by the uptrend which had started earlier at night. As we expected, the pair reversed to the upside last night, and the MACD indicator had also signaled the uptrend by moving higher. Therefore, those traders who had opened buy deals before should have closed them at night. However, it is not always convenient to trade during early hours. Therefore, we warned that opening positions in the evening can be risky. As for today, in the day session the euro/dollar pair has broken through the descending trend line. At this point, the trend reversed to the upside, and long positions became relevant. Around the same time, a new uptrend line was formed, which now supports the bulls and the euro. However, the pair did not receive any strong momentum for growth during the day. Thus, those traders who opened long deals after the price had broken though the downward trend line could close those deals in the evening at a minimum loss. This would be about 10-13 pips, since the MACD indicator had already turned down. But as the price is holding close to the uptrend line, it is not necessary to close the buy deals right now. You can take a chance and leave them open with a Stop Loss order placed below the trend line.

There were no important macroeconomic events on Tuesday, and the economic calendar of the EU and the US showed no significant news. Moreover, there were no unplanned events and publications worth paying attention to. Perhaps the most important event of the day was a new scandal around racism in the United States, which immediately sparked a new wave of protests and rallies in some cities. Just a few months ago the country faced mass protests after a white police officer killed a black man. The protests were so violent that Donald Trump had to send military units to some US cities to suppress riots. Just as the previous rallies have calmed down, the news about police shooting a black man has sparked a new wave of unrest.

On Wednesday, August 26, we also do not expect any important macroeconomic reports from Europe. However, in the United States, a report on durable goods orders for July is due to be published. This category of goods is distinguished by its high cost. Therefore, it is believed to reflect the consumers' purchasing power. It also affects the final GDP reading. Since we are currently in an upward trend, we should hope that the released data is weaker than expected. Then the pair is sure to continue its uptrend.

1) Novice trades are recommended to buy the pair since now we have an uptrend line at place. At the moment, the MACD indicator has turned to the downside. So, we recommend waiting for a new reversal to the upside and then opening long positions with the targets at 1.1831 and 1.1873. It is better if this reversal occurs in the morning. Those traders who have already placed buy positions can leave them open with a Stop Loss set below the ascending trend line.

2) The sell deals are no longer relevant. Thus, we recommend waiting for the price to settle below the ascending trend line in order to open short positions. If this happens, then the trend on the euro/dollar pair will reverse to the downside once again, and the targets for sales will be set at the levels of 1.1765 and 1.1741.

Important announcements and economic reports that you can always in the news calendar can seriously influence the trajectory of a currency pair. Therefore, at the time of their release, we recommended trading as carefully as possible or exit the market in order to avoid a sharp price reversal.

Interesting? Write a comment below.
 # Analytics and trading signals for beginners. How to trade EUR/USD on August 26. Analysis of Tuesday deals. Getting ready
Forward 
Backward 