Analytics and trading signals for beginners. How to trade EUR/USD on August 31? Getting ready for Monday session 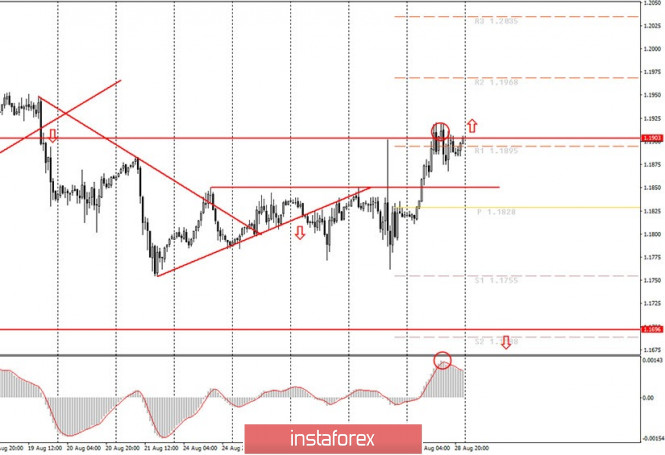 The EUR/USD pair continued to trade in an upward direction on Friday, August 27 and then it reached the 1.1903 level by the end of the day, which we have repeatedly designated as the upper line of the ascending channel. Thus, the price managed to overcome the 1.1851 level, which we said was critical for maintaining the downward trend, and earlier - the upward trend line. Therefore, at the moment, it is not even possible to make a clear conclusion about the current trend for the euro/dollar pair. At first glance, it is going up. However, buyers did not overcome the 1.1903 level, thus, a new downward movement may begin on Monday, and the trend, accordingly, will become downward. Thus, we recommend novice traders to be careful in the market at this time, since the price continues to trade between the levels of 1.1700 and 1.1900, that is, in a sideways, 200-point channel. Therefore, there is no trend in the long term. If the quotes manage to overcome the 1.1903 level, then, of course, the probability of going up in the long term will increase, but now we cannot even build an upward trend line, since the price jumped both up and down by 100 points on Thursday.

There were few macroeconomic events on Friday. By and large, the markets were trying to digest information received from the Federal Reserve Chairman Jerome Powell the day before. Moreover, the European markets and traders did not have time to work out this information, since Powell's speech came out rather late. The same was true for the Asian markets, which opened after Powell's speech. Therefore, on Friday, the markets continued to trade under the influence of what was said in Jackson Hole. And the US dollar became cheaper again. Several US macroeconomic reports were nevertheless published, but there was no reaction to them, as we warned.

August 31, Monday, is absolutely empty in terms of macroeconomic statistics. Inflation data for August (preliminary values) will be released on this day in Italy, Spain and Germany, but these figures are unlikely to cause at least some market reaction. Thus, we can assume that the calendar of events for Monday is empty. If so, the pair may begin to correct. There are two reasons for this - there is no news and an unsuccessful attempt to overcome the 1.1903 level. Thus, novice traders will need to fear only unplanned news and events on this day. However, unplanned news is unexpected and it is impossible to predict their appearance and essence.

1) Novice traders are not recommended to consider buying the pair at this time, since there are no new patterns supporting the upward movement at the moment. Thus, to buy the pair, you need to wait for a short-term upward trend to form and corresponding buy signals from the MACD (at this time, it has turned down). Even overcoming the level of 1.1903 does not guarantee a continuation of the upward movement, but in this case, novice traders, if there is a signal to buy from MACD, can still try to open longs with the target of 1.1968.

2) We also do not recommend considering sales now, because there are no patterns supporting the downward movement either. Theoretically, a rebound from the 1.1903 level can provoke a downward movement to the lower border of the side channel of 1.17-1.19, however, one cannot be sure of this either, since the borders of the channel are not clear-cut. Thus, in the next few days, we recommend that novice traders behave with extreme caution.

Interesting? Write a comment below.
 #Analytics and trading signals for beginners. How to trade EUR/USD on August 31? Getting ready for Monday session
Forward 
Backward 