Analytics and trading signals for beginners. How to trade the EUR/USD currency pair on August 31? Plan for opening and closing 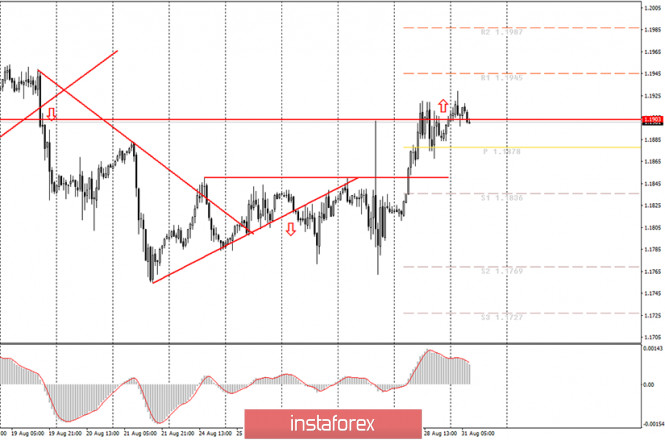 During the trading on Monday night, the EUR/USD currency pair made another attempt to gain a foothold above the level of 1.1903, however, this attempt was unsuccessful. Formally, the price overcame the level of 1.1903,however, it immediately returned again and may well now begin to fall to the level of 1.1700, which we have repeatedly defined as the lower line of the side channel in which the pair has been trading for more than a month. Last Thursday's trading, when the pair passed a hundred points up and down the same amount within a few hours, broke the technical picture for the pair and now it is completely unclear what trend is available to traders on the hourly timeframe. In the current conditions, it is impossible to build a channel or trend line, and it is not recommended for novice traders to trade without these benchmarks. Thus, option 2. Either market participants undertake to trade at their own risk or you need to wait for the formation of a clear trend and trade on the trend. Actually, this is the first rule of successful trading on the foreign exchange market – "Trade on the trend".

As of August 31, the calendar of macroeconomic events in the European Union contains quite a large number of different publications. However, all of them are of no interest to market participants. Consumer price indices in Spain, Germany and Italy, as well as GDP in Italy for the second quarter – all this is unlikely to cause any market reaction. Although the report on Italian GDP is interesting because it will once again show and prove how well things are in the European Union compared to America. Recall that last Thursday, the second estimate of GDP in the second quarter in the United States was released, and it contained a figure of -31.7%. Thus, one of the most affected by the pandemic and crisis, the European country loses three times less GDP than the world's strongest economy. This factor alone suggests that the US currency may continue to fall in price on the foreign exchange market. However, technical factors speak in favor of its growth. One of the currencies can't keep getting more expensive without significant corrections. If novice traders look closely at the older timeframes, they will see that the pair's growth has continued since April 24 and during this time the maximum was 200-250 points of correction. And the total growth is currently 1230 points. Today on Monday, market participants can only track general news (from Donald Trump, on the US-China standoff, on the 2020 election).

As of August 31, the following scenarios are possible:

1) Buying a pair at this time is not recommended for novice traders, since there are no new patterns that support the upward movement at the moment. Thus, for purchases of the pair, you need to wait for the formation of an upward trend and the corresponding buy signals from the MACD (currently directed down). Even breaking the level of 1.1903 does not guarantee the continuation of the upward movement, but in this case, novice traders can still try to open longs with the target of 1.1945 if there is a signal to buy from the MACD.

2) We also do not recommend considering sales now, because there are no patterns that support the downward movement now either. Theoretically, a rebound from the level of 1.1903 can trigger a downward movement to the lower border of the side channel of 1.17-1.19, but this is also impossible to be sure, since the borders of the channel are not clear. And, as we can see, there was no clear rebound during the night trading either. Thus, in the next few days, we recommend that novice traders behave very carefully.

Price support and resistance levels – levels that are targets when opening purchases or sales. You can place Take Profit levels near them.

Red lines – channels or trend lines that display the current trend and show which way it is preferable to trade now.

Up/down arrows – indicate when you reach or overcome which obstacles you should trade up or down.

MACD indicator(10,20,3) – a histogram and a signal line, the intersection of which is a signal to enter the market. It is recommended to use it in combination with trend constructions (channels, trend lines).

Important speeches and reports (always included in the news calendar) can greatly influence the movement of a currency pair. Therefore, during their exit, it is recommended to trade as carefully as possible or exit the market in order to avoid a sharp reversal of the price against the previous movement.

Interesting? Write a comment below.
 #Analytics and trading signals for beginners. How to trade the EUR/USD currency pair on August 31? Plan for opening and closing
Forward 
Backward 