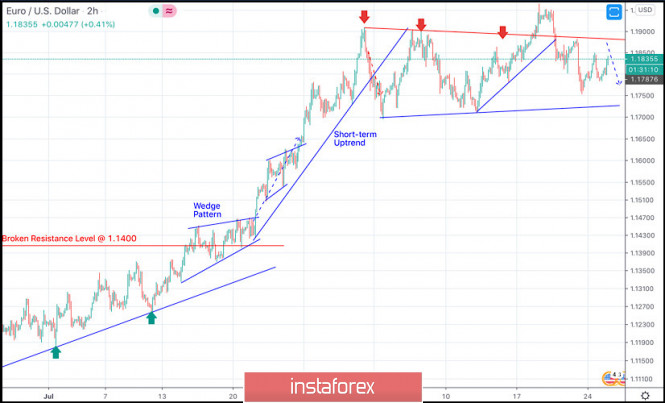 The EUR/USD pair has been moving-up since the pair has initiated the depicted short-term uptrend line on July 21.

By the end of July, a resistance level was formed around 1.1900 which prevented further upside movement for some time and forced the pair to have a downside pause towards 1.1715 in the form of a Wedge-Pattern.On August 12, a new short-term uptrend line was initiated around 1.1715 which allowed the EURUSD pair to achieve temporary breakout above the previously mentioned resistance zone.

On August 19, the mentioned breakout turned to be a false one. This enhanced the bearish side of the market initially towards 1.1800 where some bullish recovery was demonstrated on August 20.

Hence, Intraday traders should wait for another pullback to retest the upper limit of the depicted wedge-pattern around 1.1880-1.1900 for a valid SELL Position.