GBP/USD: plan for the European session on August 27. The persistence of pound buyers fuels will to grow. COT reports. Bulls

Yesterday, as never before, there were a lot of profitable signals for the pound, both to buy and sell at the end of the day. Let's deal with them and see where it was necessary to enter the market. On the 5-minute chart, you see a test of support at 1.3115, which triggers an immediate market reversal to the upside. I paid attention to this level all throughout yesterday. But even if you did not manage to buy the pound from this level, you had a great chance to enter long positions after a breakout and setting GBP/USD above the resistance of 1.3170, which is also clearly visible on the chart. Testing this area after a breakout from top to bottom formed a good entry point. But even if you missed this, it was always possible to sell the pound from the resistance of 1.3218, which I also paid attention to in yesterday's reviews. Now let's take a look and think about what we can do today. The US dollar may continue to weaken since Federal Reserve Chairman Jerome Powell will hold an important speech today. The bulls need a breakout and settle above the resistance of 1.3218, which will open a direct road to the high of 1.3260, but the 1.3316 level will be the long-term goal, which is where I recommend taking profits. It is not bad to look at long deals in case GBP/USD falls to the support area of 1.3170, where a false breakout along with testing the moving averages, which are now on the buyers' side, forms a good entry point into long positionsin anticipation of the pound's growth. If bulls are not active at this level, it is best to postpone purchases until the major support of 1.3115 has been tested, counting on a correction of 30-40 points within the day.

You also need to take note of the Commitment of Traders (COT) reports for August 18, where the growth of long positions was recorded again, as well as the reduction of short ones. The COT report indicates that short non-commercial positions decreased from 59,874 to 47,806 during the week. On the contrary, long non-commercial positions increased from the level of 48,053 to the level of 54,310. As a result, the non-commercial net position became positive and reached 6,504, against – 2,821. This suggests that the market trend has changed and buying the pound when it declines become more attractive and interesting from an investment point of view. 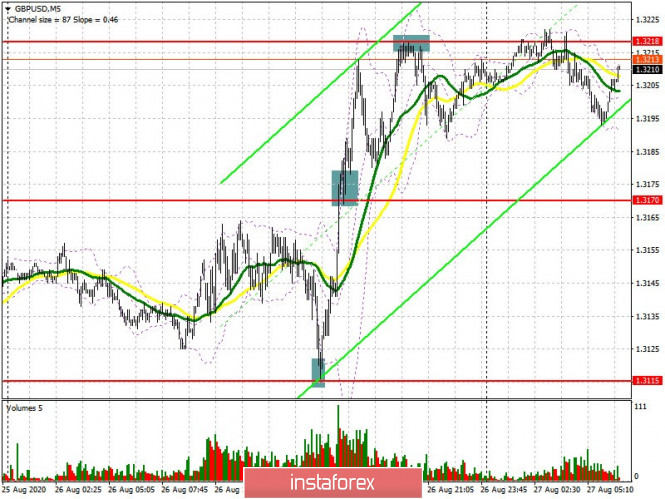 Bears need to try to prevent a breakout of the 1.3218 resistance, which buyers of the pound have prepared. An unsuccessful consolidation above this range and returning under it in the first half of the day forms a good entry point for selling the pound while expecting to return and fall to the support of 1.3170, where the downward movement may slow down. Settling below this range forms a more powerful bearish wave that can return the pair to the 1.3115 area, where I recommend taking profits. In case sellers are not active at the 1.3218 level, it is best to defer short positions to the highs in the area of 1.3260, or sell GBP/USD immediately on a rebound from a major new resistance of 1.3316 based on the correction of 20-30 points within the day. 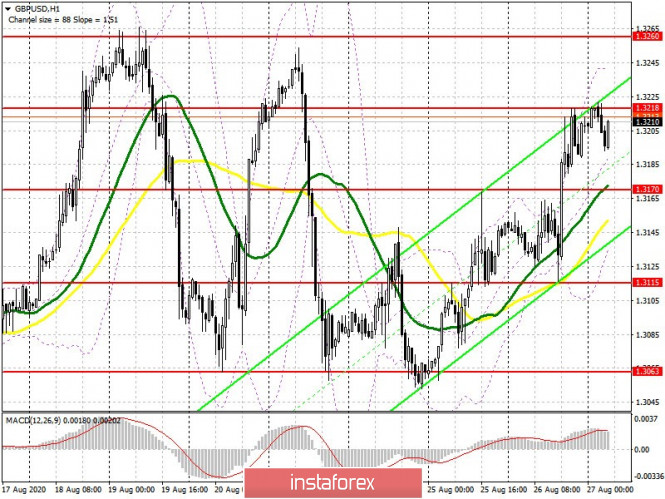 Trading is carried out above 30 and 50 moving averages, which indicates a continuation of the upward trend for the pound.

Interesting? Write a comment below.
 #GBP/USD: plan for the European session on August 27. The persistence of pound buyers fuels will to grow. COT reports. Bulls
Forward 
Backward 