Hot forecast and trading signals for EUR/USD on September 1. COT report. Dollar continues to free fall without the help of 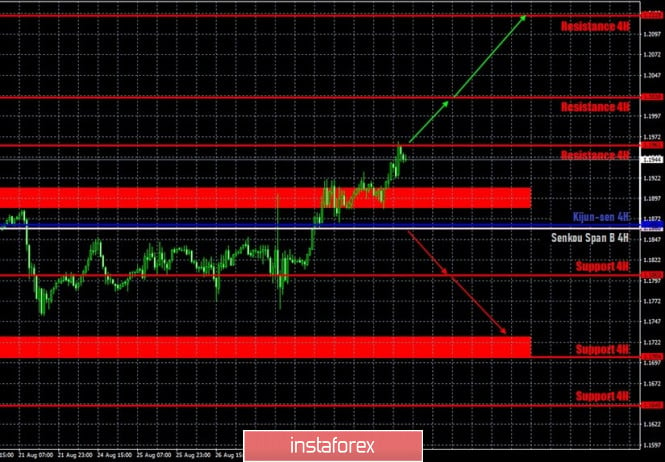 The euro/dollar pair quite easily overcame the resistance area of 1.1886-1.1910 for the second time and continued to move up to the first resistance level of 1.1961 on the hourly timeframe. Formally, the quotes of the pair left the side channel, in which they traded for more than a month. However, at the same time they failed to gain a foothold above the 1.1961 level, which is also the previous local high. Thus, despite the fact that the flat is formally over, the price can go down from the current positions. From a technical point of view, a strong downward correction is still more logical. And with the fundamental - the long-term fall of the dollar. The situation is confusing and complicated by the absence of trend lines or channels that would greatly help in trading. 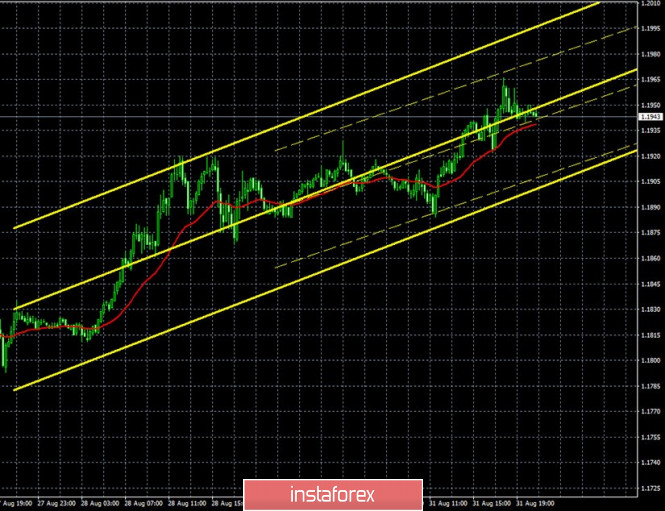 Both linear regression channels are directed upward on the 15-minute timeframe, but in the near future they may turn down if the resistance level of 1.1961 is not overcome. A new Commitment of Traders (COT) report was released last Friday. Take note that its character has not changed at all compared to previous COT reports. Despite the fact that the euro/dollar has been trading within the side channel for more than a month, professional traders continue to increase their net position. In other words, non-commercial traders (the most important group of traders) raise the number of Buy-contracts, while the number of Sell-contracts is decreasing. The non-commercial category of traders opened 1,302 Buy-contracts and closed 11,310 Sell-contracts during the reporting week on August 19-25. Thus, the net position (the difference between the number of buy and sell contracts) increased by 12,000 Therefore, we can draw the same conclusions as a week ago, as two weeks ago: professional traders continue to view the euro as a more attractive currency to invest in than the US dollar. The situation did not change during the last three trading days of the past week, which were not included in the latest COT report, as the euro continued to rise in price.

There was practically no fundamental background for the EUR/USD pair on Monday. No important macroeconomic data for the European Union or the United States were published that day either. There were also few important and interesting news. Riots and rallies against police violence under the auspices of "Black Lives Matter" continue in some cities in the United States. The social crisis, as we see, is not over. Meanwhile, US President Donald Trump criticized the Democrats again, including those who are mayors of US cities, and accused them of complete inaction in opposing the protesters. "The only way you will stop the violence in the high crime Democrat run cities is through strength!" Trump tweeted. The EU is set to publish the unemployment and inflation rate, and the US will release the index of business activity in the manufacturing sector (ISM), which will both be interesting. We would like to remind you that the previous European business activity indices significantly dropped compared to the previous month. The same fate may await US business activity.

Based on the above, we have two trading ideas for September 1:

1) Bulls again went over to attack and pushed the pair to the previous local high of 1.1961. They also managed to withdraw the pair from the side channel for the second time, in which trades were mainly held in recent weeks. Thus, if the price settles above the 1.1961 level, we recommend buying the euro again with targets at the resistance levels of 1.2020 and 1.2119. Take Profit in this case will be from 35 to 130 points.

2) Bears again missed the opportunity to start forming a new downward trend, although the bulls gave them a whole month to do so. Thus, sales of the pair can be done with targets at the 1.1803 level and the support area of 1.1702-1.1727, if the price manages to gain a foothold below the Senkou Span B line (1.1860). In this case, the potential Take Profit ranges from 35 to 115 points.

Interesting? Write a comment below.
 #Hot forecast and trading signals for EUR/USD on September 1. COT report. Dollar continues to free fall without the help of
Forward 
Backward 