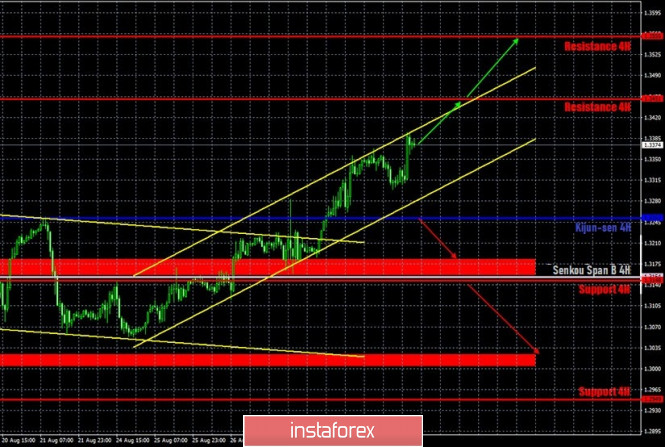 After a low downward correction, the GBP/USD pair resumed its upward movement within a new ascending channel on August 31. Thus, the upward trend for the pound/dollar pair persists after the pair's quotes left the downward channel. The nearest target for the upward movement is the 1.3451 level. Take note that all targets are located far enough both from the price and from each other. As for the technical reasons for the new upward movement, there are still few of them. A downward correction has been brewing for more than a month, which has not started due to low demand for the US dollar. This point is when it is most alarming to make long deals on the British currency. 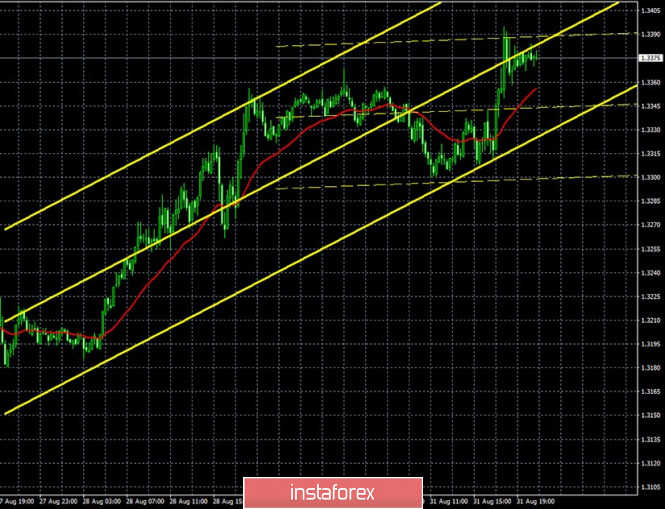 The lower linear regression channel turned sideways on the 15-minute timeframe, but the channel on the hourly chart is more important now, which supports the bulls. The latest Commitment of Traders (COT) report for the British pound, which came out on Friday, was completely neutral. Despite the fact that the UK currency resumed growth against the dollar and continued to do so at the beginning of the new week, professional traders did not open new Buy-contracts during the reporting week of August 19-25. On the contrary, 9,700 Buy-contracts and 9,100 Sell-contracts were reduced. Thus, the net position for the non-commercial category of traders even slightly decreased. However, this change is so insignificant that it makes no sense to draw conclusions on it. Thus, the general attitude of large traders remains the same. The last four trading days were not included in the latest COT report, and it was on these days that the British currency rose in price again. Thus, in the new COT report, we can see a significant increase in net position among non-commercial traders, which, in turn, will confirm the intention of the big bulls to continue investing in the pound, while getting rid of the US dollar.

Meanwhile, new, important data for the British pound and the whole of Great Britain appeared on Monday. France has officially accused London of deliberately delaying talks on a deal regarding its future relationship. "Negotiations are not advancing, because of the intransigent and unrealistic attitude of the United Kingdom," said French Foreign Minister Le Drian. Recall that the last comments of Michel Barnier indicated that the talks began to move in the opposite direction. Le Drian makes it clear to London that the European Union will not follow the lead of 10 Downing Street. Europeans believe that British Prime Minister Boris Johnson does not want to conclude a fair agreement, and in this case will not receive any deal at all. Germany also put an end to the talks. Diplomatic talks were to take place at the highest level on September 2, at which the issues of the Brexit deal would be discussed. However, Berlin said that it will not participate in them, as no progress has been made, and "time was wasted." The EU government believes that London is morally ready to leave the EU without a deal and blames Brussels for what is happening. We remind you that initially Johnson planned to withdraw Britain from the EU without a deal. Thus, from our point of view, London is bending the line that it initially adhered to. The pound sterling does not show any interest in this news, although it is negative for it.

Based on the above, we have two trading ideas for September 1:

1) Buyers have been active in recent days and are pushing the pair up again. At the moment there is a new channel to the upside. The price has reached its upper line, so today a correction to the lower line may begin, around which you can consider new long deals on the British currency while aiming for the resistance level of 1.3451. Take Profit in this case will be about 110 points.

2) Bears once again released the pair from their hands, as the quotes went above the downward trend channel, so sales are no longer relevant. Thus, it is now recommended to consider short positions again after the price settles below the new ascending channel and the Kijun-sen line (1.3252) while aiming for the support area of 1.3156-1.3182 and the 1.3025 level. Take Profit in this case will be from 50 to 250 points.