Overview of the EUR/USD pair. August 26. A new headache for Trump: a second "wave" of racially motivated protests and rallies 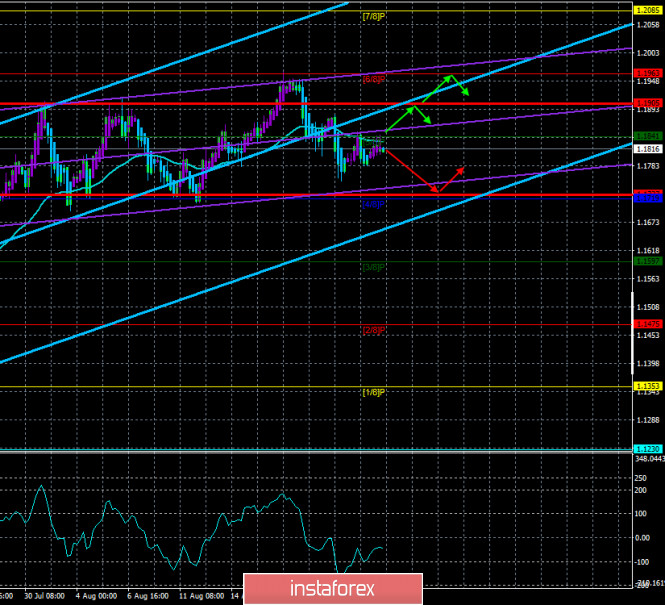 The EUR/USD pair was held in quiet trading for the second trading day of the week. In fact, during the day, traders did not receive any important macroeconomic reports and news that would be able to move the pair momentarily. Thus, the quotes continued to be slightly below the moving average line for most of the day, allowing both the option of resuming the fall, which has been brewing for more than a month. And the option of resuming the upward trend, which is less logical, but is more supported by market participants who still do not want to buy the US dollar. On the one hand, the upward trend continues, as evidenced by both channels of linear regression, on the other hand, for further growth of the euro, new reasons and grounds are also needed, which are also not available at this time.

However, the general fundamental background can again come to the aid of buyers of the pair. We have already repeatedly talked about the "four American crises", which are very likely the reasons for the strongest fall of the US dollar against the pound and the euro in the past few months. At least the "coronavirus" epidemic has begun to decline. Plus, Donald Trump officially announced that it was decided to introduce blood plasma from people who have already been ill as a vaccination for Americans, which should help develop immunity against COVID-2019. Thus, the situation with the pandemic is not getting worse, and that is a good thing. There is nothing you can do about the economy at this time. It has collapsed by 33%, and the unemployment rate is more than 10%. Thus, it only needs time to recover and the support of the Federal Reserve and the government of the country. And with this, problems have started recently. Recall that the Democrats and Republicans were not able to agree on a new package of economic assistance. Although the talks are rumored to be ongoing, there is no new information on this topic. But Steven Mnuchin promised that the new package will be adopted no later than the beginning of August. Thus, for a whole month, the US economy should have received cash injections, however, it did not happen, so the process of its recovery may be delayed. As for the election, this is already a "byword" for America. Trump himself calls the upcoming elections the most important in the history of the United States. A political crisis is the name of what is happening in the United States right now. Political lawlessness is what has been observed in the States in the past four years. Never before in the history of the United States have the actions of opposition forces been directed during the entire term of the presidency to expose the leader of the country and attempt to remove him from office. Trump himself spent more time dealing with the Democrats and the trade war with China, which ultimately led to disastrous consequences. By the way, do not forget the trade war with China, which can smoothly turn into a full-fledged "cold war". This is not a crisis, however, it also hit both Trump and the country's economy. And the last is the social crisis that was caused by the murder of a black man by a white police officer a few months ago. After that, in many cities of America, daily meetings, protests, and in some places outright pogroms, accompanied by looting, took place. The problem was so strong that Trump recalled the law of 1812, which allows him to resort to the help of the US army to suppress a popular uprising. It is good that the Defense Minister explained to the President in time that rallies and a popular uprising are not the same thing. Only in recent weeks, the protesters have calmed down a little, but not for long.

On Monday, August 24, in the city of Kenesha, Wisconsin, a man named Jacob Blake, an African-American man, was taken to the intensive care unit with a gunshot wound. As it turned out, during the arrest, the police shot him several times in the back. As usual, "someone" managed to capture everything on video. The video quickly spread across social networks and sparked new mass protests that have already taken over Chicago, Portland, New York, Madison and other US cities. And all this, we recall, in the midst of an epidemic that has just begun to wane. As during the first "wave" of protests, rallies are often accompanied by looting, arson, vandalism and other "pleasant" things. It is reported that it is unclear why the police opened fire on Blake's car, given that there were three of his minor children in the cabin. In the video, you can clearly hear seven pops, which means at least seven shots. It is also reported that Blake himself did not have a weapon and did not resist arrest. In general, now we can only guess what social movements will cause this new shooting involving white police officers and an African-American man who, fortunately, survived, underwent surgery, but remains in a serious condition in the hospital. It is possible that the country will again be overwhelmed by a new "wave" of unrest. And all this is very similar to a purposeful fight with Donald Trump...

If all these events develop, it is possible that the US dollar will start falling again despite any technical factors. As for the economic factors, there is absolutely nothing to note now. As we have already said, there were no macroeconomic reports on Tuesday. On Wednesday, August 26, in America, the publication of orders for durable goods for July is scheduled. In general, this is a fairly important indicator that includes three derived values. However, it requires a strong deviation from the actual forecast values for market participants to respond to this report. There are no scheduled reports in the European Union today. Taking into account the fact that the bears are still unable to update the previous local lows near the Murray level of "4/8"-1.1719, the pair can now continue to move up above the moving average to the area of 1.1897-1.1963. 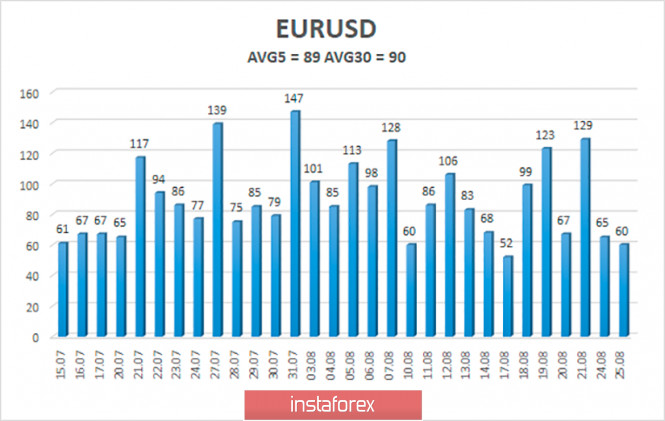 The volatility of the euro/dollar currency pair as of August 26 is 89 points and is characterized as "average". Thus, we expect the pair to move today between the levels of 1.1727 and 1.1905. The reversal of the Heiken Ashi indicator down may signal about a possible resumption of the downward movement.

The EUR/USD pair is trying to continue its downward movement and is located slightly below the moving average. Thus, today it is recommended to open new long positions with the goals of 1.1905 and 1.1963, if the pair returns to the area above the moving average line. Since the price still overcame the moving, it is now recommended to trade lower with the goals of 1.1727 and 1.1719. Further downward movement will be possible only after confident overcoming of these goals.

Interesting? Write a comment below.
 # Overview of the EUR/USD pair. August 26. A new headache for Trump: a second "wave" of racially motivated protests and rallies
Forward 
Backward 