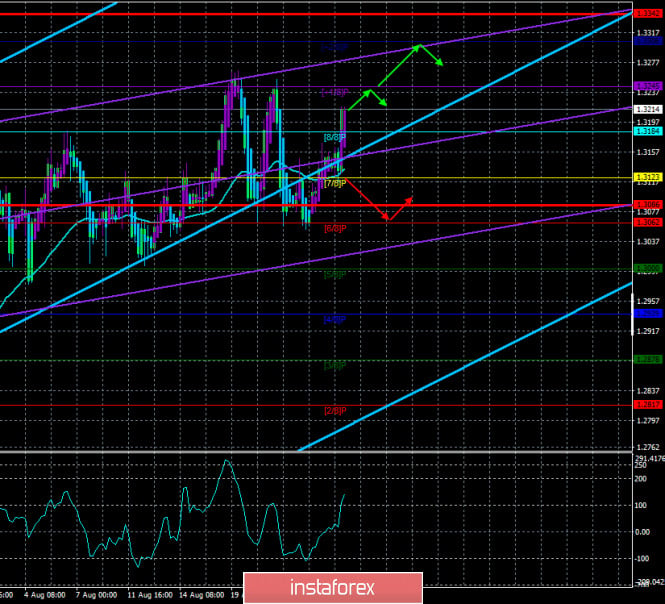 The British pound continues to trade in a "swing" mode. For the third time in the last few days, the bears failed to overcome even the Murray level of "6/8"-1.3062, not to mention the latest local lows located near the Murray level of "5/8"-1.3000. Thus, the situation for the pound does not change at all. After the third unsuccessful attempt to overcome the level of 1.3062, sellers gave up and a new round of upward movement of the pound/dollar pair began. At the moment, the quotes have already gone above the moving average and now the main question is: do the bulls want to start a new stage of the British currency's rise? As we have repeatedly said, the economic situation in the UK is not much better than the US, however, what can we do if the flow of negativity from the States does not stop, and market participants simply do not want to invest in the dollar now? By the way, not least because of the upcoming elections. It seems that America is now in a complete fog of uncertainty. It is not clear how the election will end. And it is the answer to this question that determines the future of America. Many experts agree that Donald Trump will not simply leave the post of President of the United States. Many political analysts believe that Trump can simply refuse to leave the White House, claim that the election was rigged, and demand through the court a new vote in the states where he is defeated. Thus, it is not enough that America is covered by a severe economic crisis. It is completely incomprehensible when to wait for a way out of it, since 40-50 thousand people continue to be infected daily from the "coronavirus", the country was covered with a new "wave" of rallies and protests associated with the new racist scandal and the Black Lives Matter movement, and the political the crisis is visible to the naked eye. This is how things are, and we can't blame traders for not wanting to invest in the dollar.

Meanwhile, the family of Donald Trump seems to have decided to adopt the main feature of its head and start making pretentious statements. At the Republican Party convention, unexpectedly for many, the first lady of the country Melania Trump made a speech, who said that her husband loves his country, does not hide it, "Therefore, he is the best choice of Americans, since his activity aims to improve the lives and health of the American population." It is difficult to comment on the statement of the first lady of the United States. Donald Trump completely failed to fight the epidemic and did not attach any importance to the COVID-2019 virus at all during the first months. Now, the US ranks first in the world in the number of infections and deaths from the "Chinese virus". And re-election to a second term clearly concerns him more than "the lives and health of Americans", whom he wants to quickly return to work so that the economy begins to recover. Therefore, Melania Trump's statement looks inappropriate, and YouGov can add her speech to the 20,000 times when Trump himself tried to mislead with his comments. "Donald will not stop fighting the coronavirus. He will continue to search for effective treatment methods and work on creating a vaccine," the first lady said. I would like to note that Donald is not working on creating a vaccine. Doctors are working on creating a vaccine, and Donald recently did not want to listen to these very doctors, offering Americans a treatment for malaria. Not to mention the story of Anthony Fauci, the country's chief epidemiologist, who daily denied everything Trump said about the "coronavirus".

In the UK, it's quiet and smooth. No new events or incidents. Boris Johnson remains silent and does not comment on the failure of the next seventh round of negotiations on the relationship between Britain and the European Union after Brexit. This week, there will be speeches by Andrew Bailey (Bank of England Chairman) and Jerome Powell (Fed Chairman). Perhaps their rhetoric will help the currency pair to leave a very narrow price range. But there is little hope of that. It seems that traders are now trading based on the general fundamental background, which generally remains not in favor of the US currency. This is why the dollar is not getting more expensive, although at least a correction has been brewing for at least a month. Based on this, we believe that the upper limit for the British currency is now located near the Murray level of "+1/8"-1.3245 or slightly higher. For a stronger rise in price, it is still necessary that traders receive fundamentally new information.

On Thursday, August 27, in America, in Jackson Hole, the annual economic symposium will be held, which will bring together representatives of central banks and economic scientists, who will read reports and make speeches on current problems of monetary policy. Jerome Powell will also speak at this symposium. However, given that this symposium is not a meeting of the Fed, it is unlikely that Powell will make really loud statements. Most likely, it will be limited to general phrases and information that has already been known to everyone for a long time. In addition, there will be several publications of macroeconomic reports in the United States, while in the European Union, the calendar of macroeconomic events is empty. Thus, it is recommended that traders pay more attention to non-technical factors. From the Murray level of "+1/8"-1.3245, for example, a rebound is very likely, which can even be used to open short positions. Fixing the price below the moving average can also serve as a signal for shorts. At the same time, we should not forget that the upward trend continues, since both channels of linear regression are still directed upward. 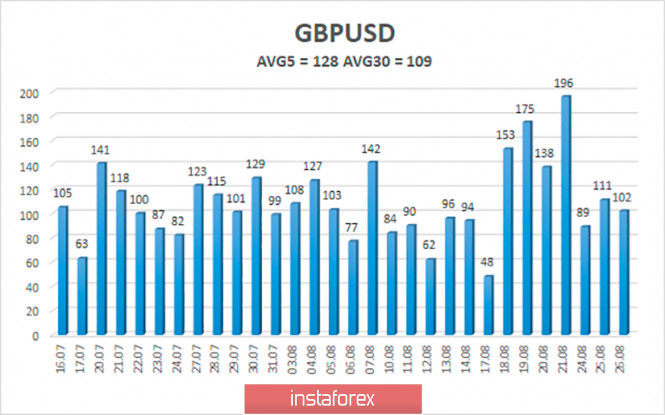 The average volatility of the GBP/USD pair is currently 128 points per day. For the pound/dollar pair, this value is "high". On Thursday, August 27, thus, we expect movement within the channel, limited by the levels of 1.3086 and 1.3342. Turning the Heiken Ashi indicator downward will indicate a possible new round of downward movement.

The GBP/USD pair is always trying to start a new downward trend on the 4-hour timeframe, however, it is still fixed above the moving average. Thus, today, it is recommended to stay in the longs with the goals of 1.3245 and 1.3306 until the Heiken Ashi indicator turns down. It is recommended to trade the pair down with the goals of 1.3086 and 1.3062 if the price returns to the area below the moving average line.