Analysis and forecast for EUR/USD on September 1, 2020

The summer is over and the market closed August trades yesterday. As a rule, after the next month closes, you need to look at the corresponding timeframe to see and understand what changes have occurred. Let's not break the tradition, and let's start today's review of the main currency pair of the Forex market with the analysis of the monthly timeframe. 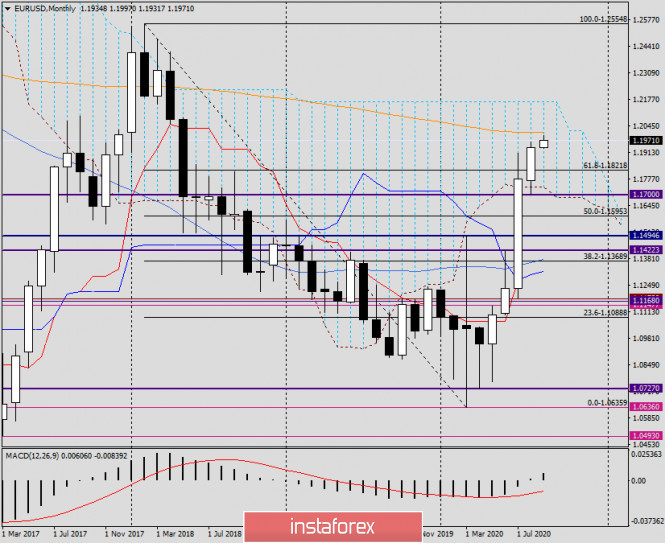 On the first day of the new month, the euro/dollar does not stop rising and is trading near 1.1985, that is, above the August highs of 1.1965. If it goes on like this, the pair will inevitably meet the 200 exponential moving average that passes on 1.2011. The closing of September trading above 200 exponential and the important psychological level of 1.2000 will only strengthen the position of bulls on the instrument and aim the quote to the upper border of the Ichimoku cloud, which runs at 1.2165. If something goes wrong and market sentiment changes in favor of the US dollar, we can expect a decline to the strong technical zone of 1.1750-1.1700. With this development, the continuation of the upward trend will be in great doubt. However, there are no prerequisites for this yet, and it is highly likely that the euro/dollar pair will continue to rise. The only thing I would like to pay attention to is the 200 EMA and the 1.2000 mark. Most likely, the bears will try to fight back against the heated bulls and restrain the growth of the quote. 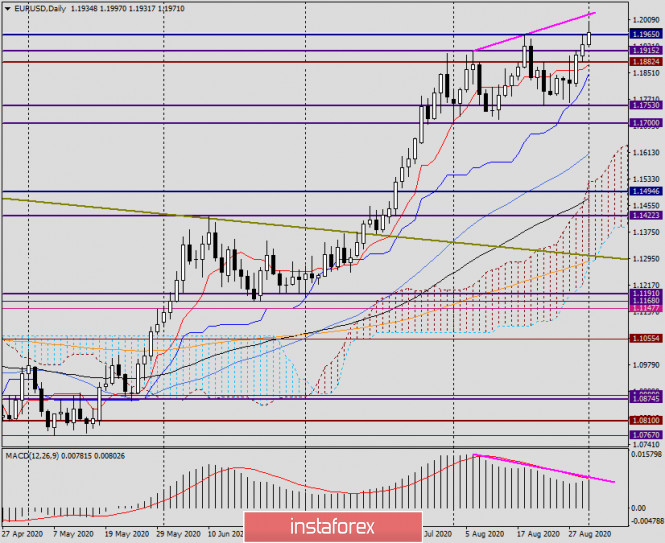 In yesterday's trading, the US dollar continued to weaken, and trading on EUR/USD ended above the once falsely broken resistance level of 1.1915. The new policy of the Federal Reserve System (Fed) regarding inflation has put even more pressure on the already weak US currency. Let me remind you that now, even if inflation rises, the Fed will keep interest rates at current low levels for a long period of time. We have not yet heard such statements from other leading world central banks, which means that if inflation increases, they will probably tighten monetary policy, which puts the dollar in a losing position against other major currencies in advance.

If we return to the technical picture on the daily chart, the bearish divergence of the MACD indicator is still completely ignored by market participants, however, it is not yet broken. If today's trading closes above 1.1965, this resistance level is likely to be considered broken, which means that we can expect a subsequent rise in the price. 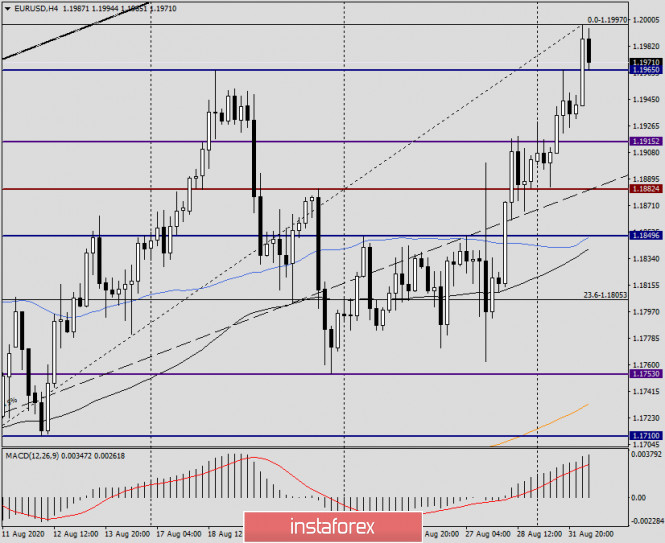 If we look at the four-hour timeframe, we see that the pair has already conducted the first test of the psychological level of 1.2000, and at the moment of completion of the review, it bounces back from this mark, which is quite expected. Once again, I would like to express my personal opinion that the opposing sides will probably have to work around 1.2000. This is a very important mark, and the monthly 200 exponential will put up resistance.

Conclusion and trading recommendations for EUR/USD:

Judging by the timeframes discussed today, the pair is likely to continue its upward trend. However, I would not recommend buying at the peak of the market, and even near the most important level of 1.2000. Now on H4, there is a pullback to the broken resistance of 1.1965. You can try to buy near this mark. Lower prices for purchases can be found in the price zone of 1.1940-1.1920. I consider the main trading idea for the euro/dollar to be purchases that are better to open after corrective pullbacks.

I would like to remind you that today's economic calendar is full of reports from Europe and the United States. Despite the fact that the most important macroeconomic events are waiting for us ahead, and today's data is worth paying attention to.