Analysis and forecast for EUR/USD on September 4, 2020

According to some investment houses, a downward scenario of the main currency pair of the Forex market is possible, while others predict a long-term growth of EUR/USD. The required technical and fundamental factors must be present for the implementation of a particular scenario. Since the author is more inclined to perceive the factors of a technical nature, they will mainly be discussed today. However, how can we ignore the US labor market data for August, which is the main event of today and the entire week? This cannot be done. Thus, according to the consensus forecast of experts, the unemployment rate in the United States will fall from the previous 10.2% to 9.8%. This forecast for unemployment can be considered very optimistic given that the situation with COVID-19 in America is one of the most difficult in the world. Also, the change in the number of employees in the private non-agricultural sector of the US economy is expected to be within 1200, while the previous indicator was at the value of 1462. The expectations are more realistic here. Finally, the average hourly wage growth is estimated by economists at 0%, compared with a 0.2% increase in July. In my personal opinion, the expectations are very reasonable in general, except for the decline in unemployment below the level of 10%. Although, on the other hand, the lifting of quarantine restrictions and the resumption of work of almost all enterprises involves large-scale hiring. Today at 13:30 London time, American labor reports will be released, which are among the most important macroeconomic indicators. By the way, I note that yesterday's initial applications for unemployment benefits in the United States came out better than expected - 881 thousand. 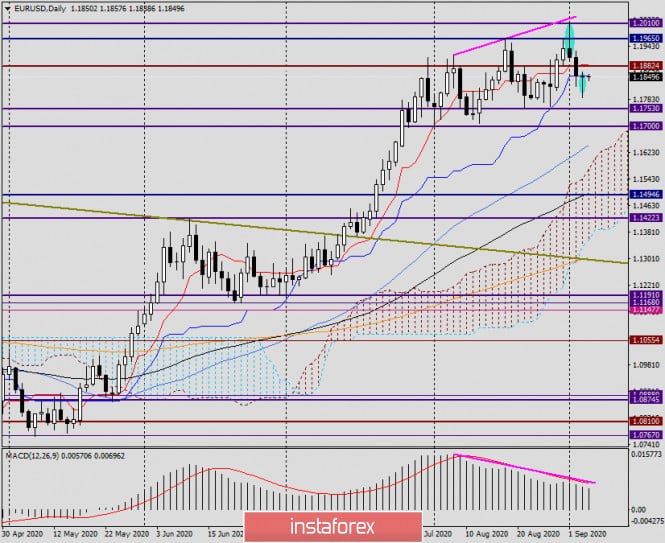 On the daily chart, the first thing that you will observe is the frequent appearance of reversal candles (in our case, every other day). In other words, they unfold whenever they want, thereby causing confusion in the ranks of traders. There are signals that the US dollar will continue to weaken, then there is a signal of the opposite value. Yesterday, the market once again signed in its ignorance of where to keep the course. The candle for September 3 with a very long lower shadow (or tail) made it clear that the pair is not in a hurry to decline. Is it going to grow? As expected at the beginning of this week, a lot will be decided on the last day of trading, when labor reports from the United States will be published.

Now about the future of the euro/dollar pair. The level of 1.2092 is located at the top, where the maximum values of three years ago were shown. Above is an important and strong level of 1.2555, where the highs of February 2018 were recorded. I would like to note that the pair fell strongly from both marks, which once again confirms their significance and strength.

The historical and technical level at the bottom is 1.1750 and the mark of 1.1700. If the euro/dollar will be fixed under the 17th figure will open the way to 1.1500 and 1.1600. To continue the upward trend, euro bulls need to close the current trades above the previous highs on 1.2010. The task is difficult, however, given the importance of statistics and increased volatility, it is quite feasible. The same can be said about the bears' plans to push through a strong technical support zone of 1.1750-1.1700.

At the moment, taking into account today's macroeconomic statistics, it is difficult to give any specific trading recommendations, especially on the last day of weekly trading. The most likely scenario from the technical picture is an upward one, that is, an increase near the most important level of 1.2000.