Analytics and trading signals for beginners. How to trade the EUR/USD on September 2? Plan for opening and closing trades 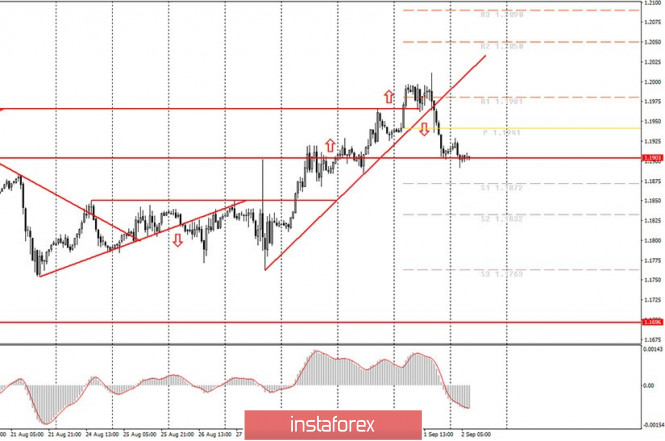 The EUR/USD pair continued to move down last night and reached the 1.1891 level, which we mentioned as a target in yesterday's articles. Today, the pair has new support and resistance levels (updated every day). Therefore, we can draw the following conclusions based on the results of the past 12 hours of trading. First, novice traders can close short positions opened on the signal of overcoming the upward trend line. The profit is about 60 points. Secondly, traders can leave sell positions open until the MACD indicator turns up. Since it is already morning, which means that the European markets will start opening, we can expect a resumption of the trend movement, and it is currently descending. Third, the price also reached the 1.1903 level, which has long been considered as the upper line of the side channel. Thus, we believe that if the 1.1903 level is overcome, then the downward movement can continue on Wednesday, September 2. Novice traders need to decide which option they are going to stick to for today.

Important reports and events from the European Union are not scheduled for September 2. A report on retail sales will be published in Germany, but we do not believe that the market will particularly react to it. Thus, we recommend novice traders to focus on the ADP report on changes in the number of employees in the private sector for August. This report shows how the number of employed Americans has changed in a month. Recall that the last report (for July) was projected with an increase of 1.5 million, but in reality the increase was only 167,000 which is much worse. Today, a growth of 950,000-1,000,000 new workers is projected. Therefore, if this figure is exceeded, then we can expect the US dollar to grow further. Otherwise, the US currency will not receive support from the macroeconomic background. But even so, the euro/dollar pair can still continue to fall (US dollar growth), as technical factors speak in favor of this option. In general, the dollar has not been in demand in the foreign exchange market for several months, but it is still able to show growth for several consecutive days.

1) Novice traders are not recommended to consider buying the pair at this time, since it has settled below the upward trend line, so the trend has now changed to a downward trend. However, the upward movement may resume in the near future, and the upward trend line may be realigned, changing the inclination of its angle no less. However, at the moment there are no prerequisites for implementing this option. They will appear if the MACD indicator moves up, after which a strong upward movement begins.

2) Sales look more relevant now, but, as mentioned above, the overall low demand for the US dollar and the possible resumption of the upward trend with a realignment of the trendline may result in cancelling the scenario with a new downward trend. In any case, novice traders had a great opportunity to reach the 1.1891 level. Now they can open short positions before the MACD indicator turns up. They can wait for a round of upward correction (if there is one) and, when it is completed, resume trading downward with targets at 1.1872 and 1.1832.

Interesting? Write a comment below.
 #Analytics and trading signals for beginners. How to trade the EUR/USD on September 2? Plan for opening and closing trades
Forward 
Backward 