Analytics and trading signals for beginners. How to trade the EUR/USD currency pair on September 21? Plan for opening and 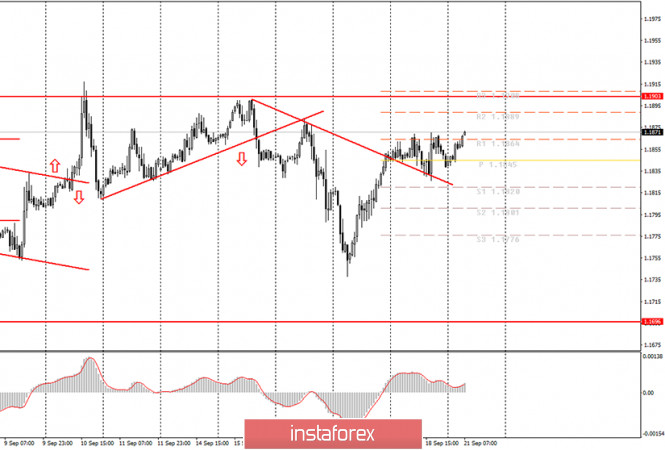 The EUR/USD currency pair unexpectedly resumed its upward movement during Monday night trading and even broke the first resistance level of 1.1864. Thus, it is not for nothing that we recommended in yesterday's review to wait until Monday morning before opening short positions. The overall trading strategy for the near future remains unchanged. Since the pair's quotes again rose to the upper area of the side channel of 1.1700-1.1900, sales should be considered. Unfortunately, there is still no trend line (inside the side channel) or trend channel that supports the trend or at least can give a signal about its change to the opposite. Thus, you have to trade almost at random. If the price is fixed above the level of 1.1903, which is the upper line of the side channel, then the upward movement can continue, and we will be recommended to consider buy orders.

The fundamental background promises to be interesting today. Yesterday, we talked about the fact that Jerome Powell, the head of the Federal Reserve, is due to speak today. Today, a line about the speech of Christine Lagarde, the head of the ECB, also appeared in the news calendars. Thus, if both of these planned performances take place, then potentially traders will have a lot of new information at their disposal today. The only question is, will Lagarde and Powell tell the markets anything new? Recall that last week the Fed meeting was held, and a week earlier - the ECB meeting. Naturally, each of the meetings was followed by a speech by the Chairman of the Central Bank. Further, the reaction of the markets to these events was very poor. Moreover, both Lagarde and Powell have already said everything they could and should have said. Therefore, it is quite possible that they will not tell the markets anything interesting today.

In general, the fundamental background remains not in favor of the US dollar. In America, the overall situation remains much more complex and unattractive for investors. The "coronavirus", conflicts and inconsistencies in the highest political sphere, and absolute uncertainty in the future due to the elections have a strong negative impact. Moreover, investors and traders don't like uncertainty. Now there is so much news associated with the name of Trump that it is completely unclear what to expect from the US President in the near future. It is unclear whether he will be able to win the election again against all odds. However, for the US dollar, this is not even important now, since it has been trading inside the side channel for almost two months in a pair with the euro and cannot leave it.

As of September 21, the following scenarios are possible:

1) Buying a pair at this time is still not recommended for novice traders, since the upward movement occurring at this time is not predicted from a technical point of view. Quite unexpectedly, the pair's quotes returned to the upper area of the side channel of 1.17-1.19, in which, again, it is better to consider sales than purchases. You can consider long positions if the pair overcomes the upper line of the channel, but even if this happens today, it is unlikely that the price will go up any more significant distance.

2) Sales now still look more attractive, however, there are no technical patterns that could give a signal to sell. Thus, the MACD indicator, turning down, may give a sell signal, however, we believe that it will be unclear and unconfirmed. Novice traders must decide for themselves whether to work out this signal or not. The nearest targets for short positions are the support levels of 1.1820 and 1.1801.

Price support and resistance levels – the levels that are targets when opening purchases or sales. You can place Take Profit levels near them.

MACD indicator(10,20,3) – a histogram and a signal line, the intersection of which is a signal to enter the market. It is recommended to use it in combination with trend lines(channels, trend lines).

Interesting? Write a comment below.
 #Analytics and trading signals for beginners. How to trade the EUR/USD currency pair on September 21? Plan for opening and
Forward 
Backward 