Analytics and trading signals for beginners. How to trade the EUR/USD currency pair on September 14? Analysis of Friday's 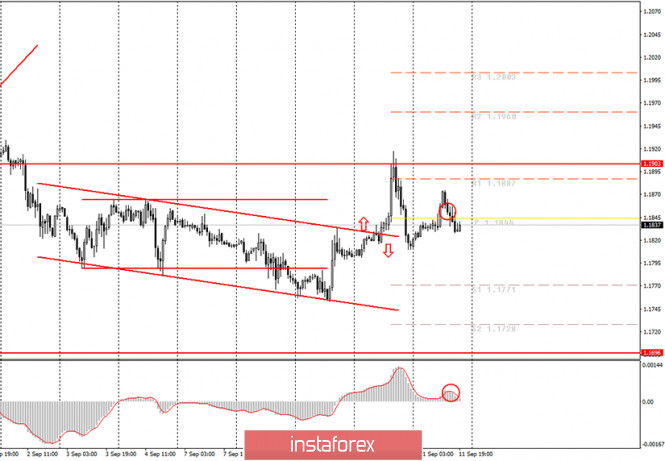 On Friday, September 11, the EUR/USD currency pair began to adjust against the last round of the downward movement, which was a correction against the unjustified strengthening of the European currency after the ECB meeting and Christine Lagarde's speech. Thus, the quotes were in an upward movement for most of the trading day. In our morning review, we recommended waiting for the MACD signal to sell, which was still formed. Thus, novice traders had every reason to open new short positions, however, at the moment, there are only a few hours left before the end of the trading week and it is unlikely that the pair will continue to fall. Thus, novice traders can close open sell positions and resume trading on Monday. On Monday, trading will open at night, thus, it will be inconvenient to maintain open short positions from Friday. If you leave them open, then do not forget about stop-loss orders that limit possible losses.

The fundamental background today was expressed by a single report on inflation in the United States. Yesterday, we already warned that inflation in America may exceed its forecasts, which will be very good for the US currency. So it turned out in practice. Despite the fact that many macroeconomic indicators of the state of the American economy are in the "knockout", inflation continues to remain at a very high level, as for the crisis. According to today's report, the consumer price index rose to 1.3% y/y, while inflation excluding food and energy prices rose to 1.7% y/y. Recall that both the Fed and the ECB set a target level for inflation of 2%. The European Union inflation in August was -0.2% y/y. In the United States, it was +1.3% y/y. The difference is obvious. Unfortunately, market participants have again shown that they do not care about statistics at all and react to them only selectively. Thus, the US dollar did not receive proper support on Friday, September 11.

On Monday, September 14, there will not be a single significant publication or event in the EU or America. Thus, trading can take place on this day with low volatility and in a calm channel. In general, the euro/dollar pair continues to trade in the side channel of 1.17-1.19 and no fundamental background can take the pair out of this range for a month and a half.

On September 14, the following scenarios are possible:

1) It is still not recommended for novice traders to consider purchases at this time, since the price could not overcome the level of 1.1903, which is the upper line of the side channel. Therefore, further upward movement is canceled for the time being. Also, there is not a single pattern that would support trading on the increase now.

2) Sales now still look more attractive, if only because traders failed to overcome the level of 1,1903. At the same time, the situation is not very clear as to the possibility of opening new short positions. First, there are no patterns that would support the downward movement. Secondly, the MACD indicator turned down after the price rolled back up, however, this ended the trading week. Therefore, now you need to maintain open short positions with a target of 1.1771 until Monday morning (by setting the stop-loss level). Or to make a new analysis of the market and consider the possibility of opening new positions for sale.

Price support and resistance levels – the target levels when opening purchases or sales. You can place Take Profit levels near them.

MACD indicator(10,20,3) – a histogram and a signal line, the intersection of which is a signal to enter the market. It is recommended to use it in combination with trend lines(channels, trend lines).

Important speeches and reports (always included in the news calendar) can greatly influence the movement of the currency pair. Therefore, during their exit, it is recommended to trade as carefully as possible or exit the market in order to avoid a sharp reversal of the price against the previous movement.

Beginners in the Forex market should remember that every trade cannot be profitable. The development of a clear strategy and money management is the key to success in trading over a long period of time.

Interesting? Write a comment below.
 #Analytics and trading signals for beginners. How to trade the EUR/USD currency pair on September 14? Analysis of Friday's
Forward 
Backward 