Analytics and trading signals for beginners. How to trade EUR/USD on September 17? Plan for opening and closing trades on 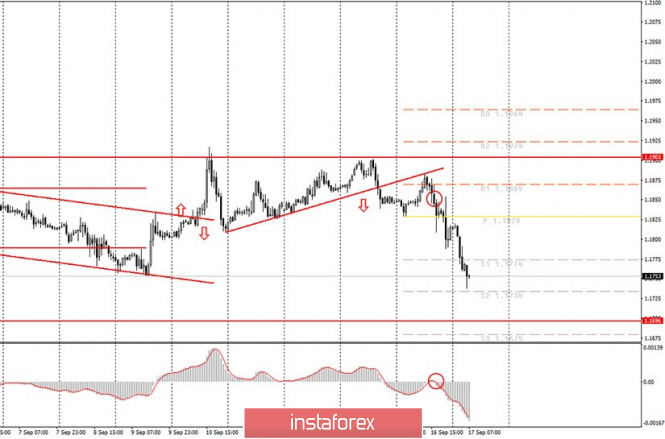 The EUR/USD currency pair continued to move down on Thursday night after the MACD sell signal, which appeared yesterday. In last night's article, we advised novice traders to either close all short trades at minimal profit before Federal Reserve Jerome Powell's speech, or set the Stop Loss level at breakeven and leave open sell orders until the morning. In principle, novice traders could make a profit. In the second case, short positions should be still open, and the total profit on them should be equal to 90 points. Therefore, traders have a choice: to wait for the MACD indicator to reverse to the upside and then close short positions, or close them right now and be content with a profit of 90 points. Meanwhile, the euro/dollar pair has moved from the upper area of the side channel of 1.17-1.19 to the lower one. It worked out and the pair broke through the first support level of 1.1774, and nearly reached the second one at 1.1734. Now, it is quite possible to expect the pair to reverse to the upside near the lower limit of the side channel. Unfortunately, traders still do not have either a trend channel or a trend line to support a particular trend.

In yesterday's speech, Powell said the US economy was recovering at a faster pace than expected. Forecasts for unemployment, GDP and inflation for 2020 are significantly higher compared to June. Now the Fed expects total GDP losses to reach 3.7% (previously forecasted at -6.5%), inflation will be 1.2% y/y (previously it was assumed at 0.8% y/y), and unemployment will be 7.6 % (previously 9.3%). Thus, Powell really made an optimistic and encouraging statement, which provided strength to the dollar. However, in addition to this, Powell also said that the prospects for the recovery of the US economy remain uncertain due to the coronavirus epidemic that continues to rage. "The level of economic activity as a whole remains lower than before the crisis," Powell said.

The European Union is set to release a report on inflation today, which may disappoint buyers of the euro. The point is that, unlike the American one, European inflation dropped below the 0% y/y level. Therefore, this is deflation, which is very, very bad for the EU economy. If the report shows that inflation remains at less than 0%, then we can expect the pair to continue falling (that is, the fall of the euro and the growth of the US dollar).

1) Novice traders are still not recommended to buy the pair at this time, since the price is currently falling. Unfortunately, there is not even a trend line that would support the downward trend and setting the price above it can determine if this trend will change to an upward one. In our case, buyers can only wait until the lower limit of the 1.17-1.19 channel is reached and in case of a rebound from it, you can start opening long positions.

2) Selling still looks more attractive, despite the fact that the pair's quotes have moved from the upper area of the side channel to the lower one. As we mentioned above, traders can either wait for the MACD to reverse upwards to close short positions, or close them now at a profit of about 90 points. You are recommended to open new shorts only when the pair corrects upward by at least several tens of points. The goal for extending the fall is the 1.1734-1.1700 area.

Interesting? Write a comment below.
 #Analytics and trading signals for beginners. How to trade EUR/USD on September 17? Plan for opening and closing trades on
Forward 
Backward 