Analytics and trading signals for beginners. How to trade EUR/USD on September 18? Plan for opening and closing trades on 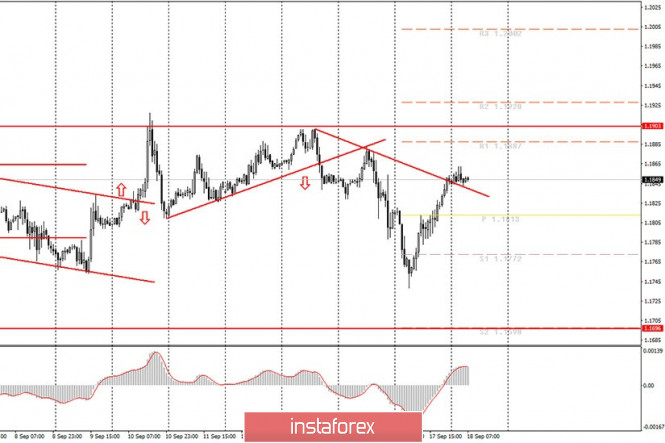 The EUR/USD currency pair continued to move up last Friday night, which began as a correction after quotes fell, triggered by the results of the Federal Reserve meeting and Chairman Jerome Powell's speech on Wednesday. In practice, however, it turned out that this correction in strength is approximately the same as the main downward movement. Yesterday we even tried to build a downward trend line, hoping for the price to rebound from it, which would enable novice traders to consider new opportunities for opening short positions today. However, as you can see from the graph, the quotes did not stop near the trend line even for a minute. This suggests that either the trend line is irrelevant or extremely weak. In general, we failed to use it so we can receive a sell signal, and the buy signal is weak. In general, it is now the most unfavorable time for trading over the past few weeks.

The most interesting thing now concerns the fundamental background. Recall that the European Central Bank held a meeting last week, while the Federal Reserve held its own this week. As we have already mentioned many times, there was a lot of interesting information at both meetings, but it did not change the general fundamental background, which could lead the EUR/USD pair out of the horizontal channel at 1.17-1.19 in the future. The European Union released its inflation report yesterday, which showed deflation of 0.2% y/y for the second consecutive month. First, it is very bad for the eurozone and for the single currency (euro). Secondly, everything is also very bad in comparison with the US inflation (+1.3% y/y). However, the euro did not fall, but instead it continued to strengthen all day.

In addition, not a single important macroeconomic report is scheduled at all on the last trading day of the week. In news calendars, the US University of Michigan Consumer Confidence Index is marked in red, indicating its highest level of importance. However, we would like to note that this indicator rarely causes any market reaction. Thus, we can assume that there will be no reports and news from both the eurozone and the United States today. The only possible exception is unscheduled messages from, for example, US President Donald Trump. But this information cannot be predicted and taken into account in advance.

1) Novice traders are still not recommended to buy the pair, since the upward movement taking place at this time is very unexpected and in no way predictable from a technical point of view. In such an unexpected way, the pair's quotes returned to the upper area of the horizontal channel at 1.17-1.19, in which, again, it is better to consider selling rather than buying. We recommend novice traders to not force events and wait for the situation to clear up. You can consider long positions if the pair breaks through the upper channel line, but even if this happens today, the price is unlikely to go up for any significant distance.

2) Selling still looks more attractive now, however there are no technical patterns that could provide a sell signal. There was no rebound from the trend line. Thus, the MACD indicator, having turned to the downside, may provide a sell signal, however, we believe that it will be fuzzy and weak. Novice traders themselves must decide whether to work with this signal or not. MACD may turn down in the next hour or two. The nearest target for short positions is 1.1772.

Interesting? Write a comment below.
 #Analytics and trading signals for beginners. How to trade EUR/USD on September 18? Plan for opening and closing trades on
Forward 
Backward 