Analytics and trading signals for beginners. How to trade GBP/USD on September 22? Plan for opening and closing trades on

Hourly chart of the GBP/USD pair 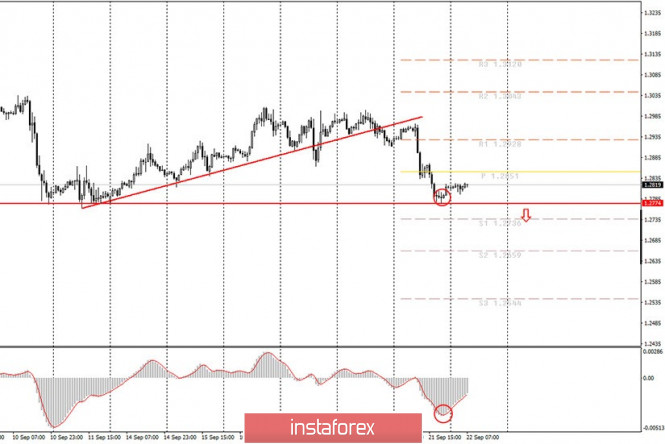 The GBP/USD pair fell yesterday morning and so did the euro. As a result, the price dropped to the previous local low near the 1.2774 level. This milestone for the pound/dollar pair is very important, since it protects it from another significant fall. Let us remind novice traders that since September 1, the pound sterling has fallen in price by 700 points within ten trading days, afterwards it managed to win back 200 points. And for no apparent reason, quotes fell again yesterday and it seems that the 1.2774 level will be overcome almost in any case. This is indicated, firstly, by a weak rebound from this level. Secondly, the fundamental background for the British pound remains so weak that it is quite difficult to expect anything other than a fall. We remind you that the EUR/USD pair continues to trade inside the horizontal channel, that is, there is no fall, as for the pound, now.

Thus, the fundamental background is to blame, particularly that from the UK. Recall that at the beginning of September, it was announced that the next two rounds of talks regarding the Brexit deal, which would take effect on January 1, 2021 and would save the EU and the UK from additional financial losses, had failed. London stubbornly refuses to make concessions, and according to Michel Barnier (the head of the EU negotiating team), Britain does not want to sign an agreement at all. It is difficult to provide a reason, given that it would have been profitable for London to trade freely with the European Union, and not according to the WTO rules. Nevertheless, the fact remains. There is no deal, and it is unlikely that there will be one now. In addition, British Prime Minister Boris Johnson "helped" the pound, as he considered that now is the time to play a new bluff in negotiations with the EU and also hinted that London may violate the agreements on the Northern Ireland border that were reached at the end of last year in its state interests. Naturally, such information immediately caused the pound to fall, since now all major investors and traders are afraid to hold the pound in their hands and invest in the British economy. There is no confidence in the country, which at any moment may violate the principles of international law. So it turns out that there is practically only one road for the pound, to go down.

1) We still do not recommend buying the pound/dollar pair, since a strong downward trend has appeared at this time. We believe that the quotes will continue to fall, respectively, for the possibility of opening long positions, you should wait until the trend changes to an upward one. To do this, it would be nice to form a trend line or channel, but so far we only have an upward trend line, below which the price successfully settled a few days ago.

2) Sell positions, from our point of view, are much more convenient at the moment. You can open them at this time through a new MACD signal or by closing the price below 1.2774. The closer to the zero mark the MACD indicator turns down, the stronger this signal. Speeches of the heads of the US and British central banks Jerome Powell and Andrew Bailey will take place today. These events can affect the mood of traders and the pound/dollar pair's movement during the day.

Interesting? Write a comment below.
 #Analytics and trading signals for beginners. How to trade GBP/USD on September 22? Plan for opening and closing trades on
Forward 
Backward 