Analytics and trading signals for beginners. How to trade EUR/USD on September 29? Plan for opening and closing trades on 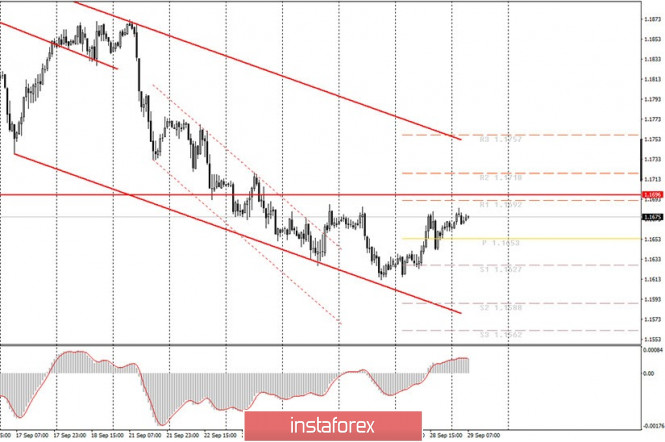 The EUR/USD pair continued a slight upward correction last Monday night. Therefore, we continue to wait until it's completed and a sell signal from the MACD indicator to appear, which we recommend for novice traders. However, a paradoxical situation has now occurred with the MACD indicator. The correction was delayed and the indicator went far up from the zero level, to which we advised you to wait until the indicator eases. So now the indicator can produce a false sell signal, since it needs to be discharged in the opposite direction. If the upward movement continues and is still weak, then the indicator is very likely to discharge. So far, we see that the price is near the local high of 1.1684, but the indicator is already trying to turn to the downside. Therefore, we advise you to be careful when opening short deals today. The descending channel remains relevant, and the quotes of the EUR/USD pair are now trading neatly in the middle of it.

The fundamental backdrop for the US currency remains complex. Much more difficult than for the euro. That is why we believe that it is much more likely for the dollar to fall (that is, an increase in the EUR/USD pair) than the euro. However, firstly, the price is still trading in a descending channel, and secondly, the situation in the eurozone is starting to deteriorate at this time. This applies primarily to the coronavirus. Everyone is used to the fact that around 40-45,000 people in America fall ill. They got so used to it that neither the country's chief epidemiologist, Anthony Fauci, nor the country's president, Donald Trump, touch on this topic. One gets the impression that everything is fine. Second waves have already begun in some countries in Europe, and potentially they can start everywhere. So far, the largest increase in diseases is observed in Spain and France. For example, Italy, which also suffered greatly in the first wave, keeps its incidence rates at the level of 1-2,000 per day. Potentially, the second wave in Europe could deal another blow to the European economy, which, naturally, is not good for the common currency. However, the euro's decline isn't necessarily such a big problem right now. The greatest concern in the eurozone right now is the inflation rate, which has gone below 0% in Germany and the EU as a whole. Prices are currently falling compared to the previous year. And this is really a problem, since there will be no economic growth without inflation.

1) Novice traders are advised to not consider buy positions at this time, as there is a clear downward trend, and trading against the trend is not recommended. Therefore, you can consider long positions when the price has settled above the downward trend channel or when a new upward trend appears, supported by a trend line or another channel.

2) Short deals remain relevant, however, an upward correction is still present at this time. Thus, you are advised to wait until the MACD indicator reverses to the downside and then you can open short positions and aim for 1.1627 and 1.1588. In theory, the correction could continue to the highest line of the descending channel. This option also cannot be completely ruled out. Therefore, do not forget about placing Stop Loss orders.

Interesting? Write a comment below.
 #Analytics and trading signals for beginners. How to trade EUR/USD on September 29? Plan for opening and closing trades on
Forward 
Backward 