Analytics and trading signals for beginners. How to trade EUR/USD on September 30? Plan for opening and closing trades on 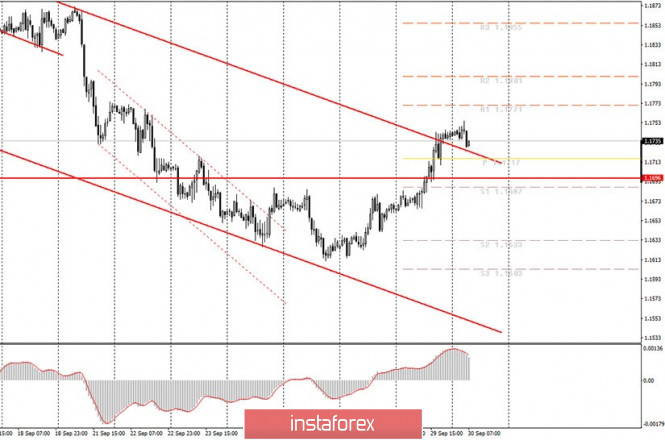 The EUR/USD pair as a whole continued to move up last Tuesday night and only pulled back by several tens of points towards the morning. First of all, the pair's quotes left the descending channel, and, secondly, they did not start a downward correction. The descending channel retained its bearish ambitions, and now we are forced to announce that the trend has changed to an upward one. Nevertheless, as we mentioned in yesterday's article, a downward correction is still required to consider long positions. At the moment, the MACD indicator is near its highest values, so it is extremely inconvenient for it to generate new buy signals. Moreover, we can't build an upward trend line right now, since there is simply no second support point. In general, the pair really needs a downward correction, and after that you can finally consider opening new positions.

The fundamental backdrop for the dollar remains complex. To date, several rather important events are planned that may affect the course of trading. Recall that we and all traders need a downward correction, which means that the dollar must strengthen. One of the most important events has already happened. The first round of debates between Donald Trump and Joe Biden took place in Cleveland, America. They passed in a "quiet", "cozy", "almost home" atmosphere. Joe Biden asked the incumbent president to "shut up" several times and called him "Putin's puppy." Trump constantly interrupted his opponent and was also not distinguished by polite behavior. There was no particularly strong reaction to this event. And thank God. Novice traders can now focus on economic events. Namely, the speech of the European Central Bank President Christine Lagarde, the publication of data on unemployment in Germany, the ADP report on the change in the number of employees in the US private sector, as well as the publication of US GDP for the second quarter in its third estimate. Let's immediately separate the "flies from the cutlets". The GDP indicator is unlikely to have any impact on the pair's movement, if it does not differ greatly from the forecast (-31.7%). Lagarde has been delivering a speech quite often lately and everything will depend on whether she tells the markets something new and interesting. Naturally, she will touch upon the coronavirus topic and the possible impact of its second wave on the European economy. The ADP report is the most important report to date and well reflects the state of the US labor market. The number of employees is expected to increase by 648,000. If results turn out to be better than the forecast, the US dollar will finally be able to get the support it needs to start a correction. In general, there will be a lot of events today, so you are advised to conduct extremely cautious trading in any case.

1) Buy positions have now become relevant since traders managed to overcome the upper line of the descending channel. However, as we have said more than once, the pair needs to correct. Therefore, we recommend that you open buy orders but not before this very correction. At the same time, after it has ended, it may be possible to build an upward trend line. The targets for the upward movement are 1.1771 and 1.1801.

2) Sell positions have lost their relevance after breaking the integrity of the descending channel. The pair might even resume a downward trend now, but the technical picture speaks in favor of a variant with an upward movement. Therefore, we need a new downward trend in order to consider short deals. It is unlikely to appear in the near future.

Interesting? Write a comment below.
 #Analytics and trading signals for beginners. How to trade EUR/USD on September 30? Plan for opening and closing trades on
Forward 
Backward 