Analytics and trading signals for beginners. How to trade the EUR/USD on September 4? Plan for opening and closing trades 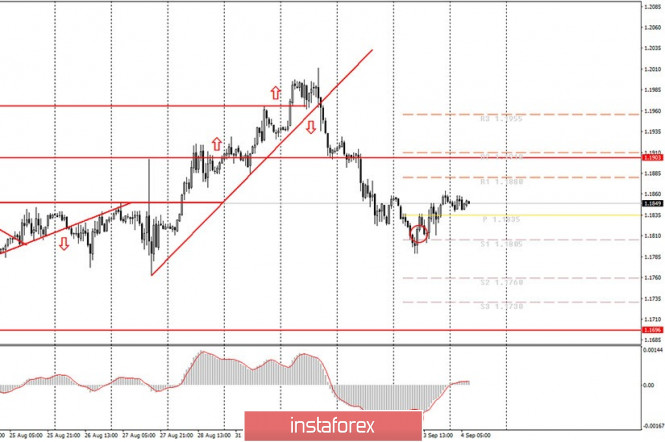 The EUR/USD pair continued to correct on Thursday night trading. This is clearly indicated by the MACD indicator, which has not made a single attempt to turn down since the last review was written (last night). By and large, we observe the same picture this Friday morning. The downward movement may resume today, since the dollar's upside potential is still present. We believe that the pair could fall to 1.1700. Market participants can trade based on technical factors and signals until the US data has been released. But the market may experience sharp reversals and an increase in movement once US reports are released in the afternoon. Therefore, if you only look at the technique, a new downward reversal of the MACD indicator may indicate the possibility of opening new short positions in the EUR/USD pair. But everything can change during the US trading session.

We recommend novice traders to entirely focus on US unemployment reports and the NonFarm Payrolls report on September 4. The first report is significant for the American economy because it is, in principle, one of the most important indicators of the state of the economy. The more people are unemployed, the less goods and services will be produced in the country, the lower the GDP, the more the government needs to pay unemployment benefits, which is an additional burden on the budget. In the case of the United States, unemployment is driving the country into even more national debt, which has already grown by 4 trillion in 2020 alone and could rise even more. Thus, the drop in unemployment is a positive factor for the dollar. An equally important report - Nonfarm Payrolls - is essentially the same as unemployment, only from the other side. This report shows how many new jobs have been created outside the agricultural sector. The first indicator shows how much the number of unemployed people has decreased, and the second - how much the number of jobs has increased. The forecast for the unemployment rate is 9.8-9.9% in August, according to Nonfarm Payrolls - 1400-149K. Therefore, if the real values of indicators turn out to be higher, it is likely to support the US dollar.

1) Novice traders are advised to not consider buying the pair at this time, since the pair has settled below the upward trend line, so the trend has now changed to a downtrend. In the near future, the upward movement may resume, but now an uptrend line or channel will be needed to identify a new trend and trade accordingly.

2) Sell positions are still looking more relevant now. The pair corrected by 70 points, which, of course, is quite small, but nevertheless there was a correction, which means that we might see a downward movement. Thus, in the first half of Friday, we recommend trading in accordance with technical signals. That is, if the MACD indicator turns down, then we sell the pair while aiming for 1.1805 and 1.1760. You need to be extremely careful in the afternoon and trade in accordance with the US macroeconomic data. When these reports are finally released, it is recommended to either set a Stop Loss to open trades, or be ready to intervene at any time based on what is happening in the market.

Interesting? Write a comment below.
 #Analytics and trading signals for beginners. How to trade the EUR/USD on September 4? Plan for opening and closing trades
Forward 
Backward 