Analytics and trading signals for beginners. How to trade EUR/USD on September 7? Getting ready for Monday session 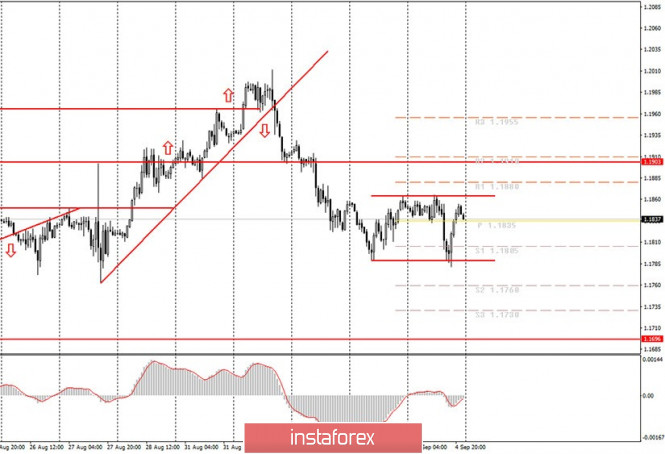 The EUR/USD currency pair spent the whole day inside a75-point corrective side channel on Friday, September 4. This is not small for an intraday channel, but then again it can also be considered as somewhat small. The main thing is that there was no trend movement on Friday. In general, the trend remained downward, so novice traders could open short positions, as the MACD indicator moved down twice during the day. Unfortunately, the first sell signal turned out to be false, as the indicator swiftly moved back up, and the second one was not false, but sharp, the price simply started falling too quickly and it turned out to be too short-lived. In the first case, traders could limit themselves to minimal losses, since the price could not continue to move up after a false signal. In the second case, traders had to open trades after the quotes fell by 50 points near the first target for the day – 1.1805. However, we warned in Friday's morning review that sharp price reversals are possible once important US macroeconomic data are released, and we recommended that you conduct the most cautious trading at this time, do not forget about Stop Loss orders or leave the market altogether. Therefore, in general, Friday should not have brought big losses to traders.

As for fundamental events, all the most interesting things happened again in the United States. Economic factors are considered the most important in terms of the degree of influence on any currency's movement. However, they have clearly faded into the background in recent months (during the coronavirus pandemic). Thus, the macroeconomic reports from the US were very important, but at the same time they caused a rather weak and not entirely logical reaction from the market. For example, the US unemployment rate fell by almost 2% in August, which is a lot. The hidden unemployment rate fell by 2.3%, while the average wages rose by 0.4% m/m. All these are positive aspects for both the American economy and the dollar. However, we only saw a short-term rise in the dollar, and then it immediately fell. The Nonfarm Payrolls report turned out to be slightly worse than forecasted, but not at all critical. We would even say that it was in line with forecasts, therefore, it could not cause disappointment among market participants. Thus, the entire package of data was positive, but did not result in a significant rise from the dollar.

Macroeconomic data from the EU or the US will not be published on Monday, September 7. Thus, the macroeconomic background does not have any influence on this day, so the pair can be traded in a very narrow range with low volatility. Friday's movement may extend until Monday. We recommend novice traders to wait for the price to leave the side channel and only then should you resume trading.

2) Sell positions continue to look more relevant, but the pair spent the last two days in a side channel. Therefore, novice traders are advised to wait until this correction is completed and also wait for the price to leave the channel (shown in the illustration) through its lower line. This may not happen on Monday, since market movements are usually weak on this day. However, we recommend trading lower after the price settles below 1.1789.

Interesting? Write a comment below.
 #Analytics and trading signals for beginners. How to trade EUR/USD on September 7? Getting ready for Monday session
Forward 
Backward 