Analytics and trading signals for beginners. How to trade EUR/USD on September 9? Plan for opening and closing trades on 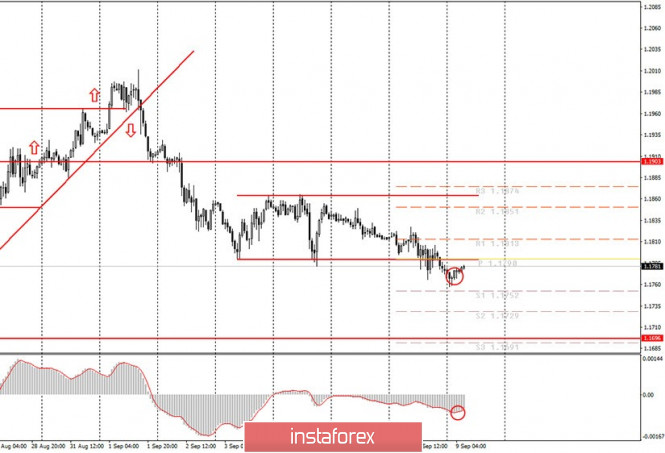 The EUR/USD pair went down another 20 points during Wednesday night trading, after which a kind of upward correction began. Nevertheless, the pair's quotes still managed to gain a foothold below the side channel of 1.1790-1.1865, so now novice traders are recommended to consider trading down again. At the moment, the MACD indicator has moved up, so we recommend that you wait for its reversal back down. In general, there has even been a kind of downward trend in the last two days, very weak, but still a trend. We have already used the wording "some kind of similarity" twice because it is very difficult to describe the pair's entire movement in the last week in any concrete way. It seems that signs of a trend movement appear from time to time, but at the same time, side channels also regularly keep the price within themselves. We remind novice traders that the pair has been mainly trading in the range of 1.1700-1.1900 for the last month and a half. Thus, by and large, the price is also in a side channel of 200 points wide for a month and a half.

Novice traders have nothing to pay attention to on September 9, since there are no planned macroeconomic data as of now. The fact that the pair left the small sideways channel works in favor of the US currency, which has a good chance of strengthening towards $1.17. However, the markets are mainly focusing on the British pound, for which there is much more news and events. Therefore, traders also have the right to expect rather weak movements without a pronounced trend today. Results of the European Central Bank meeting and a press conference by ECB President Christine Lagarde will be held tomorrow. These events are extremely important, as the monetary policy of the entire European Union may be changed. Let us recall that monetary policy is a set of instruments that the central bank uses to regulate economic processes. The ECB is unlikely to change rates, but it may well announce a new expansion of the PEPP program (a program to repurchase bonds from the open market in order to fill the economy with cash and thus stimulate it to growth). In addition, many interesting things can be heard from Lagarde's speech. The ECB president can share with the markets the future plans of the central bank, economic forecasts for the next two years, as well as tell how the economy is recovering and what to expect in the near future.

1) We generally recommend novice traders to not consider buy positions at this time, since the pair has settled below the upward trend line, so the trend is leaning more on the downside. There was also no rebound from the lower line of the side channel of 1.1790-1.1865. Therefore, at this time, there is not a single technical pattern that supports the upward movement.

2) Sell positions still look more relevant now. The price has overcome the side channel, so now we can consider short positions. However, to do this, you need to wait for the MACD indicator to move down, and then resume trading down with the targets at 1.1752, 1.1729 and 1.1700. However, volatility at this time remains weak, even very weak, and with such volatility the price is unlikely able to reach 1.1700 today or tomorrow. This point must be taken into account when opening any positions.

Interesting? Write a comment below.
 #Analytics and trading signals for beginners. How to trade EUR/USD on September 9? Plan for opening and closing trades on
Forward 
Backward 