Any strong movements before the Fed meeting should not be expected. Overview of USD, EUR, and GBP

The CFTC report published on Friday, which tops off the 6-month anniversary of the pandemic announced on March 11, was interesting because it included the market's reaction to the Fed's changing approach to monetary policy, presented by J. Powell at the Jackson Hole virtual symposium. Nevertheless, these changes are minor.

In view of this, the dollar's short position declined slightly. It would be logical to expect a sell-off of the dollar, since the refusal to target the yield curve is a step towards reducing returns, but investors believe otherwise. The total short position on the US dollar, reflected in major currencies, declined by $ 239 million, to a still significant $ 33.2 billion. 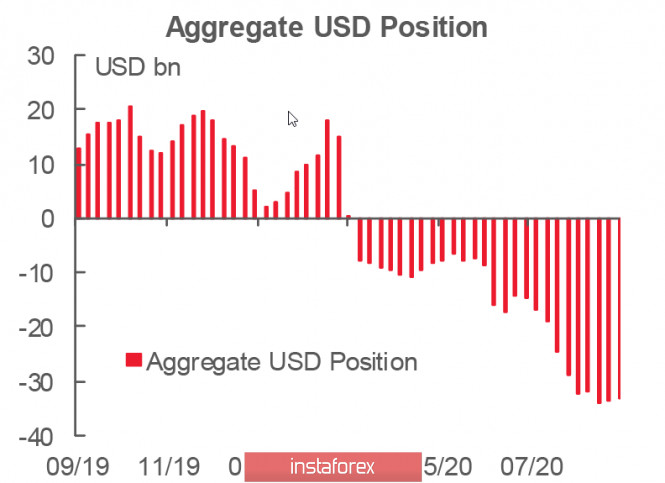 The changes are multi-directional for other currencies and prevents us from seeing any general trend. Some of the currencies of the commodity block were being sold (AUD, NZD), while CAD and MXN rose. The protective currencies unanimously reduced their long positions, but at the same time, the total dollar position increased to 45.687 billion.

It is obvious that strategic decisions will be made based on the analysis of the results of the Fed meeting, which will be held on Tuesday-Wednesday. For now, changes in mood on Monday morning are insignificant, a slight increase in enthusiasm is observed amid reports about the resumption of AstraZeneca trials of the coronavirus vaccine. Of course, these are only artificial drivers that affect the information background, since the Russian vaccine which entered the market did not affect the mood in these markets in any way.

The net long position on the euro declined over the week by $ 320 billion, but is still the highest among the G10 currencies. Moreover, the target price has stopped declining and is showing an upward trend despite the overall improvement in the dollar outlook. 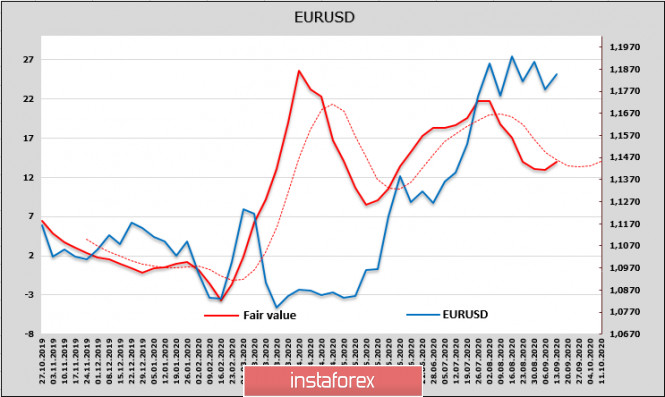 Last week, the ECB agreed that the euro has primary reasons to grow, and so, there are low chances of leaving the consolidation zone by Wednesday. Given the upward reversal of the target price, we can expect an attempt to break out of the range and consolidate above 1.20. However, a decline is less likely, since in this case, the Fed will have to strongly surprise the markets on Wednesday.

According to the UK Office for National Statistics last Friday, there was significant progress on a number of parameters. The decline in industrial production slowed down in July from -12.5% to -7.8% y/y, while production growth was 5.2% m/m. Both indicators exceeded forecasts. Meanwhile, inflation remains at a high level of 2.8%, and NIESR estimates GDP growth for the 3 months to August inclusive at 7%. 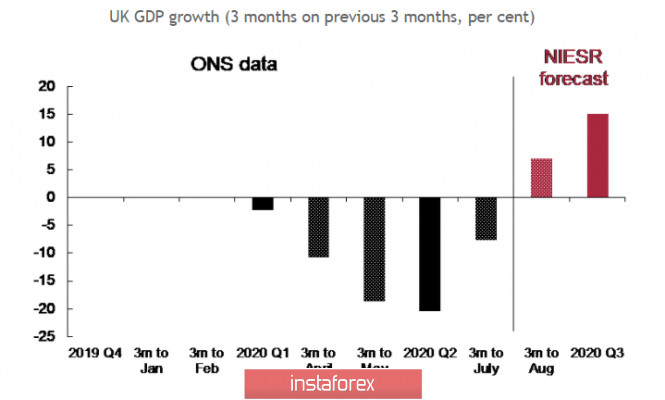 Despite the seemingly strong growth, the British economy has recovered only slightly more than half of the fall in production and all major industries remain below pre-crisis values. However, we must assume that economic indicators will not change the general approach to assessing the prospects of the pound – the political node on Brexit is in the first place, the policy of the Bank of England is in the second place, and only after them do macroeconomic indicators gain some significance.

Brexit negotiations with the EU are at a dead end. EU officials said the UK should amend its plans "as soon as possible and in any case by the end of the month." Michael Gove, UK spokesman, said there would be no withdrawal of the bill, to which the EU reacted with a harsh comment that it would "not hesitate to use" all legal means if the UK passed the bill in its current form.

In this regard, the pressure on the pound is growing. Despite the fact that the total long position on the pound increased slightly in the reporting week, the movement of capital in the stock and debt markets is not in favor of the pound. The estimated price shows a decline again. 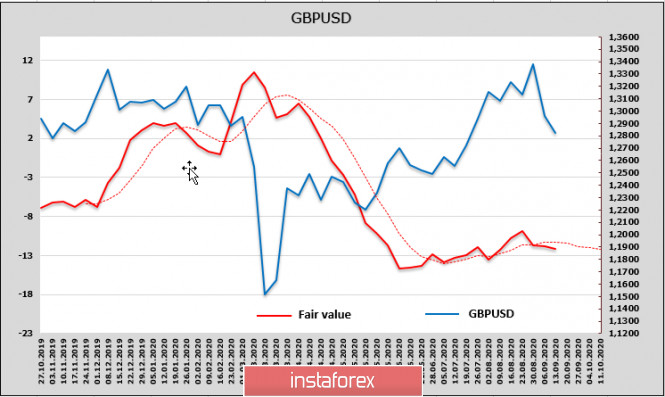 The negotiations will resume tomorrow, which will have a decisive impact on the pound's quotes. Technically, the outlook is unclear. We failed to consolidate below the support level of 1.2815, so a pullback to the resistance level of 1.2878 or even to the middle of the 1.3050/70 channel should be expected, but the long-term target is a strong support zone at 1.2620/40.

Interesting? Write a comment below.
 #Any strong movements before the Fed meeting should not be expected. Overview of USD, and GBP, EUR
Forward 
Backward 