AUD/USD. The Aussie follows the dollar: the target is 0.7000

The Australian dollar paired with the US currency follows the General trends in the market, weakening under the attack of the greenback. After another unsuccessful assault on the 73rd figure, the AUD/USD currency pair turned around and has been steadily declining for three consecutive days, currently falling to the base of the 71st price level. Despite all the" trumps" of the Aussie, the dollar was stronger, so the AUD/USD bears may soon capture at least 100 more points getting close to 0.7000 key support level.

Mainly, the pair's summer growth was primarily due to the weakness of the US dollar. All the fundamental factors associated with the Australian did not interfere with this process but rather did not contribute also to the strengthening of the Northern trend. For example, the Reserve Bank of Australia relays cautious optimism while maintaining a wait-and-see attitude. Representatives of the regulator do not tire of repeating that low rates will remain in effect for a long time until the Australian economy fully recovers from the coronavirus crisis. And judging by the dynamics of Australian inflation and the labor market, this path will be long. The coronavirus outbreak and subsequent lockdown in the country's largest state of Victoria negatively affected the dynamics of the national economic recovery. Therefore, the RBA's optimism is extremely restrained, without any "hawkish" notes. 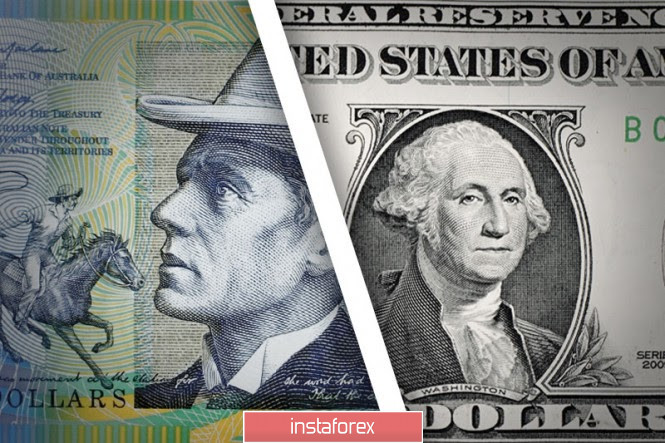 The growth dynamics of key macroeconomic indicators is also contradictory. First of all, we are talking about the labor market. So, we are seeing a decrease in the unemployment rate and an increase in the number of people employed. In contrast, the latter indicator is growing only due to the growth of part-time employment while full-time employment shows weak growth dynamics. This imbalance is also reflected in the growth of wages, since full-time positions imply higher salaries. Hence, the decline in consumer activity of Australians and weak inflation growth.

For several months, the Australian dollar intentionally ignored all these shortcomings of macroeconomic reporting: "Aussie" was guided by the optimism of RBA members, who assured the market that the coronavirus strike was weaker relative to early forecasts and the national economy is on the path of recovery. This was quite enough for AUD/USD traders not to bother with the problems of the Aussie and focus on the dynamics of the US currency. Figuratively speaking, the Australian dollar was the leader and the US dollar was the leader, but the fundamental factors of the "Aussie" did not drown the pair.

Now this dependence on the behavior of the greenback plays against buyers of AUD/USD. The American is rapidly gaining momentum reacting to the changed fundamental background. The dollar index returned to the area of the 94th figure during the Asian session on Wednesday, where it has not been since the end of July. The strengthening of the US currency is due to several fundamental factors. First, there is a surge in anti-risk sentiment in the market associated with the growing number of coronavirus cases worldwide. The United States still ranks first in the world in both the number of infected and fatal cases. But recently, COVID-19 is returning to those countries where it has already been seemingly defeated, while restarting the economy. In particular, many countries of the European continent are again tightening quarantine restrictions such as Britain, Spain, Czech Republic, Germany, thus foreshadowing a slowdown in recovery processes.

In addition, the growth of anti-risk sentiment was also promoted by the loud scandal of The "FinCEN dossier" - a major leak of financial documents. The FinCEN file leak differs from all previous similar cases that are not just documents from one or two companies, but files that came from different banks and from different countries. The documents mention such giants as Deutsche Bank, JPMorgan, Standard Chartered, HSBC, Barclays, BNY Mellon and Societe Generale. News of the data leak and possible consequences caused shares in European banks to fall earlier this week – i.e. the Stoxx 600 Banks sector fell by more than 5%, and the HSBC share price hit a 25-year low.

The third factor in the dollar's strength has a first and last name. This is Treasury Secretary Steven Mnuchin. He said at the House financial services Committee that the White house continues to work with Congress to pass an economic aid package. At the same time, he assured that the administration is "ready to come to a bipartisan agreement." And although he had repeatedly voiced such confidence (while subsequent negotiations reached an impasse), this time his words coincided with the General strengthening of the greenback.

Thus, the AUD/USD currency pair will decline as long as the US currency continues to grow, which in turn will remove from the current market situation. From the technical point of view, the price is currently testing the support level of 0.7130 (the upper limit of the Kumo cloud on the daily chart). With a high degree of probability, we can assume that sellers will overcome it and open their way to the lower border of the above cloud up to the level of 0.7020. This is the key goal of the southern movement, since it is better to close short positions at the base of the 70th figure as this target may be too tough for the AUD/USD bears.

Interesting? Write a comment below.
 # AUD/USD. The Aussie follows the dollar: the target is 0.7000
Forward 
Backward 