The euro-dollar pair is in a difficult situation due to the contradictory fundamental background. On the one hand, we have the European Central Bank representatives worried about the high euro exchange rate, on the other hand, the weak dollar, which is still under pressure from the Federal Reserve's latest decisions. In addition, the US macroeconomic data is also showing mixed dynamics: if the ISM manufacturing index came out better than forecasts, the ISM composite index for the non-manufacturing sector disappointed investors. In such conditions, the EUR/USD pair failed to develop a downward momentum, and did not return to its previous positions, in the area of the 19th figure. Traders are stuck at the crossroads, on the middle line of the BB indicator on the daily chart (1.1840). The August Nonfarm Payrolls report is a kind of arbitrator in this situation, which is set to be released at the beginning of the US session on Friday.

As mentioned above, the fundamental picture for the euro-dollar pair is quite ambiguous. The US currency fell on all fronts for almost an entire week, after the Fed announced that it has decided to resort to a new strategy of targeting average inflation. Fed Chairman Jerome Powell made it clear that rates will remain at the current level for a long time – much longer relative to earlier forecasts. Now, not only should US inflation approach the two percent level, but also gain a foothold above this target level. Only then will the Fed return to the issue of tightening monetary policy. The Fed will also focus on key data on the labor market. That is why the Nonfarm Payrolls report will play such a big role for the dollar pairs tomorrow. But let's talk about the Nonfarm data a little later on, and focus on the problems of the European currency now, which arose quite suddenly. Let me remind you that the latest data on inflation growth in the euro area turned out to be much worse than the forecast values. The recession is serious - Europe has faced deflation for the first time in four years. There are many reasons for this weak inflationary dynamics. In particular, outbreaks of coronavirus were reported in many EU countries in August (first of all, we are talking about Spain, France and Germany).The memory of the spring lockdown is still fresh in people's minds, when economic activity actually stopped in Europe, and the unemployment rate, on the contrary, increased. Therefore, as soon as the first reports of repeated outbreaks of COVID-19 appeared in the press, the consumer activity of Europeans significantly decreased . People began to save more and spend less on non-essential goods.

But the weak growth of European inflation is due to another reason, the high euro rate. The European currency has strengthened against the dollar by a thousand points in recent months. If the pair traded within the 1.08-1.09 price range in the spring, now the price niche is located much higher - in the 1.18-1.20 area. Not only does currency revaluation have a negative impact on inflationary processes, but also on foreign trade - on the export sector. That is why, as soon as the EUR/USD pair touched the 1.20 mark, the ECB immediately became concerned about this fact. In particular, the ECB Chief Economist Philip Lane said that the current euro rate is "unacceptable for the central bank." Traders were alarmed with this rhetoric: rumors spread throughout the market that the central bank would conduct a currency intervention to devalue the single currency. The pair dropped to 1.1790 due to this factor.

However, the pair's bears failed to gain a foothold in the area of the 17th figure. First, most analysts still tend to believe that ECB members will limit themselves to verbal interventions for the time being, reserving more powerful levers of influence for the future. Secondly, the US ISM index in the non-manufacturing sector was published today. Contrary to growth forecasts, it fell to 56 points (from the previous value of 58.1 points). Third, an extremely weak ADP report was released yesterday. According to ADP, only 428,000 jobs were created in August (the forecast was at the level of one and a half million). 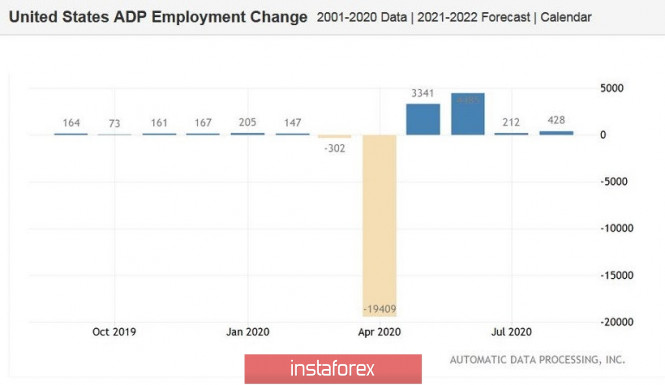 Traders do not risk investing in selling the EUR/USD pair for these reasons. If the key data on the growth of the US labor market comes out worse than projected, the dollar will be under great pressure, and buyers of the pair will be able to return to the area of the 19th figure and possibly test the resistance level of 1.2000. According to preliminary forecasts, the number of people employed in the non-agricultural sector should increase by 1,500,000 people. For comparison: this figure increased by 1,700,000 in July. The unemployment rate should remain within 10 percent. But salaries might disappoint: in both monthly and annual terms, the indicator should demonstrate negative dynamics. In this case, the dollar will react negatively, even if other components enter the green zone. Inflationary indicators are now under special scrutiny, so weak wage growth will hit dollar bulls.

You should take a wait-and-see attitude before the Nonfarm Payrolls report is released. If the data supports the greenback, the pair may fall to the lower line of the BB indicator on the daily chart, that is, to the 1.1730 level and below, to the bottom of the 17th figure. If the Nonfarm Payrolls report disappoints (or at least the wages does), the price may return to the 19th figure. In view of this uncertainty, trading decisions should now be delayed.