To open long positions on EUR/USD, you need to:

After yesterday's weak fundamental data on the Italian economy and inflation in Germany, several rather interesting signals formed in the market, both to buy and sell the euro. Let's deal with them. If you look at the 5-minute chart, you will see how the bulls acted quickly enough during the test of the 1.1887 support, forming a false breakout from it, which caused EUR/USD to instantly grow to the resistance area of 1.1947, where on the first test of this level, you could open short positions based on a downward correction against the trend. The bulls took the 1.1947 level in the afternoon and tried to continue the upward trend by testing it from top to bottom, which materialized in today's Asian session, as a result of which the 1.1994 level was finally reached. The report from the futures market also indicates that the growth of the European currency will continue in the near future.

As for the current technical picture in the EURUSD pair, a large growth during the Asian session may go on until the European session. To do this, the bulls need a breakout and have to settle above the resistance of 1.1994, which will lead to removing a number of stop orders from the bears above the 20th figure and to continue the bull market by updating highs of 1.2022 and 1.2057, where I recommend taking profits. However, a more rational solution in this situation is to buy when the euro falls in the support area of 1.1937. There are also moving averages that play on the side of euro buyers. Forming a false breakout at this level will be a signal to open long positions in anticipation of continuing the upward trend. If buyers are not active at this level, you can safely open long positions for a rebound from the support of 1.1887 based on a correction of 20-30 points within the day. 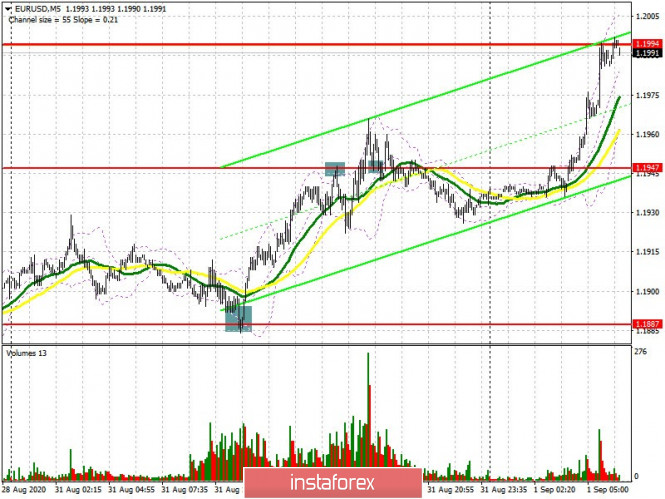 To open short positions on EUR/USD, you need to:

Sellers of the euro can only protect the resistance of 1.1994. Forming a false breakout at this level, along with poor data on the PMI index for the manufacturing sector of the eurozone countries, may strengthen the downward correction in the pair. However, the focus will shift to inflation data, a slowdown in which may lead to a revision of the European Central Bank's policy, which will have a negative impact on the euro. If sellers are not in a hurry to return to the market from the resistance of 1.1994, it is best to postpone short positions until a high of 1.2022 has been updated, or sell EUR/USD immediately to rebound from the resistance of 1.2057 in anticipation of a downward correction of 20-30 points within the day. An equally important task for the bears is to return the pair to the support of 1.1937 and settle below it. Since only in this case it will be possible to talk about a pressure forming on the pair and its further decline to the area of the low of 1.1887, where I recommend taking profits. 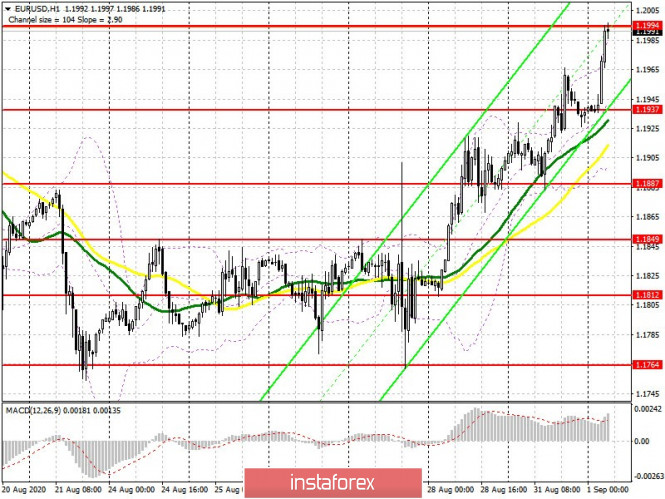 Trading is carried out above 30 and 50 moving averages, which indicates a continuation of the bullish trend for the euro.

In case of a decline in the pair, support will be provided by the lower border of the indicator around 1.1910, from which you can buy the euro immediately on a rebound.