EUR/USD: plan for the European session on September 14. COT reports. Where will the triangle be terminated? Direction is

Several signals to enter the market appeared on Friday. If buyers of the euro were in control before US inflation data was released, then upon its publication, bears took over the market.The 5-minute chart clearly shows how, after the breakout and consolidation above the resistance of 1.1854, the bulls managed to form an excellent entry point into long positions from this level, which caused the price to slightly increase by around 20 points, afterwards the momentum sharply slowed. The bears returned to the 1.1854 level after the release of US data on consumer prices, and having tested it from the bottom up, they formed a good point for opening short positions, which I also drew attention to in my afternoon review.

Important changes in the futures market influenced the alignment of forces, however, the market continues to be on the side of the euro buyers, although the next profit taking, both in long and short positions, speaks of caution among players. The Commitment of Traders (COT) reports for September 8 showed long non-commercial positions declining from 250,867 to 248,683, while short non-commercials also fell from 54,130 to 51,869. Political uncertainty in the United States and central bank meetings have forced many traders to wait and see ahead of the fall marathon. As a result, the positive non-commercial net position slightly rose and reached 196,814, against 196,747, a week earlier.

As for the current situation on the market, the pair's direction depends on how the resulting triangle is terminated. The bulls have the task of returning to resistance at 1.1854 in the morning, consolidating on which forms a good entry point to long positions, counting on rising towards last week's high of 1.1905, which is where I recommend taking profits. The 1.1949 level will be the long term target. If the euro is still under pressure in the morning, and since we do not expect important fundamental data today, then it is best to postpone long positions until a false breakout appears in the 1.1800 area, or buy EUR/USD immediately to rebound from the low of 1.1756 based on a correction of 20-30 points within the day. 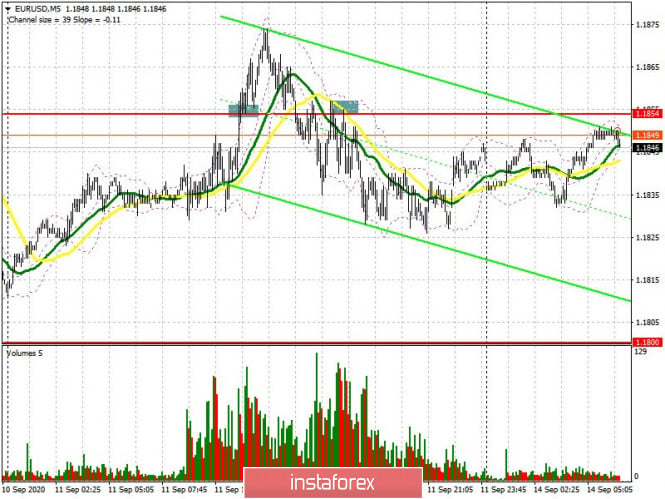 The bears will count on a false breakout in the resistance area of 1.1855 in the first half of the day, which will be a signal to sell the euro in order to return to the middle of the side channel at 1.1800. Weak data on industrial production in the eurozone in July could provide help, which is set to be released in morning. Settling below 1.1800 will increase pressure on the pair, which will lead to a retest of the channel's lower limit at 1.1756. Consolidating below this range would open a direct road to the 1.1714 and 1.1648 lows. This scenario will also form a new downward trend. If the bulls continue to push the pair up and try to seize the initiative at the 1.1854 level, just above which the upper limit of the current triangle passes, it is best not to rush to sell, but wait until the 1.1905 high is updated and a false breakout is formed there, or sell EUR/USD immediately on a rebound from the larger resistance of 1.1949 based on a correction of 20-30 points within the day 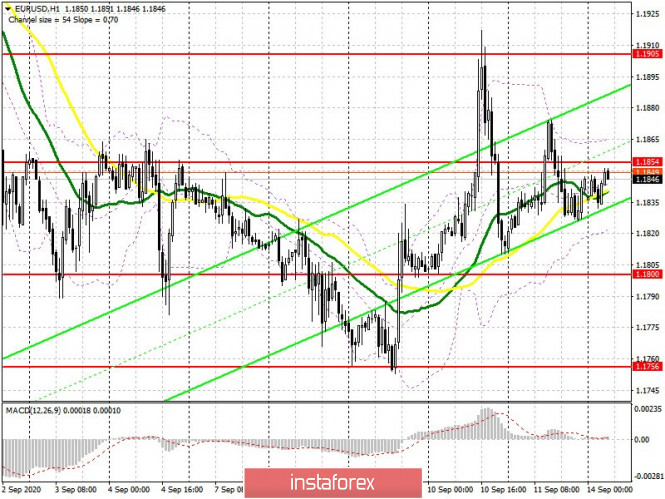 Trading is carried out in the area of 30 and 50 moving averages, which indicates how the market is uncertain with the direction.

Interesting? Write a comment below.
 #EUR/USD: plan for the European session on September 14. COT reports. Where will the triangle be terminated? Direction is
Forward 
Backward 