Several signals to open short positions in the euro appeared yesterday, after the bulls made many attempts to stay above the 1.1854 level. Let's deal with them. If you look at the 5 minute chart, you will see how the bears regained the 1.1854 level and, having tested it from the bottom up, formed a good entry point to sell. Then, the pair returned to this level after the Federal Reserve's decision was announced, which led to an influx of new sellers and another signal to sell the euro. The only longs worth paying attention to were after a false breakout of the 1.1800 support at the very end of the day. But there was no movement more than 20 points from this range. The situation in the pair is quite difficult at the moment. Bulls need to defend support at 1.1756, which is being tested for the third time and is likely to be broken. Therefore, I recommend buying from this level only if a false breakout appears and the pair returns to this range with the main goal of updating resistance at 1.1800, which is where I recommend taking profit.

However, today's data on eurozone inflation is unlikely to be able to do anything, so it is best to postpone longs until the new monthly low of 1.1714 has been tested, counting on a correction of 20-30 points from this level. Larger bulls will wait for an update of the 1.1648 area. When buying euros, you must understand that you are going against the trend. Therefore, the lower the longs, the higher the chance of a correction and rebound. Let me remind you that the Commitment of Traders (COT) reports for September 8 showed that long non-commercial positions decreased from 250,867 to 248,683, while short non-commercial positions also fell from 54,130 to 51,869. Political uncertainty in the United States and central bank meetings forced many traders to wait and see ahead of the fall marathon. As a result, the positive non-commercial net position grew only slightly and reached 196,814 against 196,747 a week earlier. 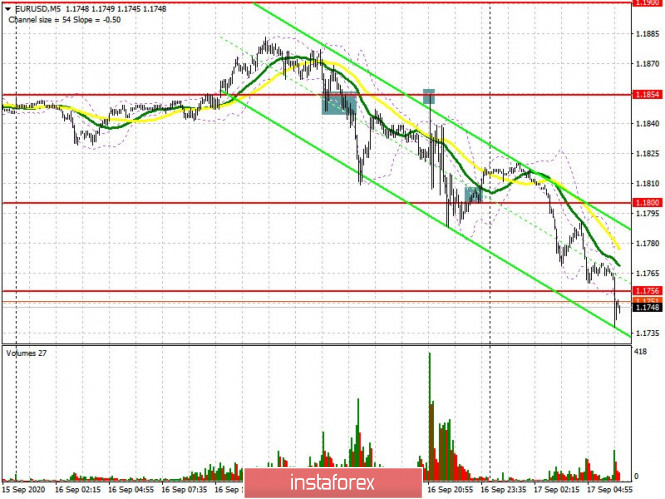 The bears are aiming for a breakout and consolidation below the 1.1756 level, but you need to be careful when selling since the pair has already gone more than 75 points down since the day started and we need the support of large players for it to decline further. The most optimal scenario for selling would be an upward correction to the resistance area of 1.1800, from where you can open short positions in the euro immediately on a rebound in order to continue the bearish market and then you can settle below 1.1756. If we trade around 1.1756 in the first half of the day, constantly smearing it, then, most likely, the bear market will continue only when the US session opens, therefore, when forming a sideways channel, try to enter the market as high as possible, from its upper limit. Bears will have the main goal of pulling down EUR/USD to the support area of 1.1714 as well as its breakout, which will open a direct road to new monthly lows in the areas of 1.1648 and 1.1585, which is where I recommend taking profits. 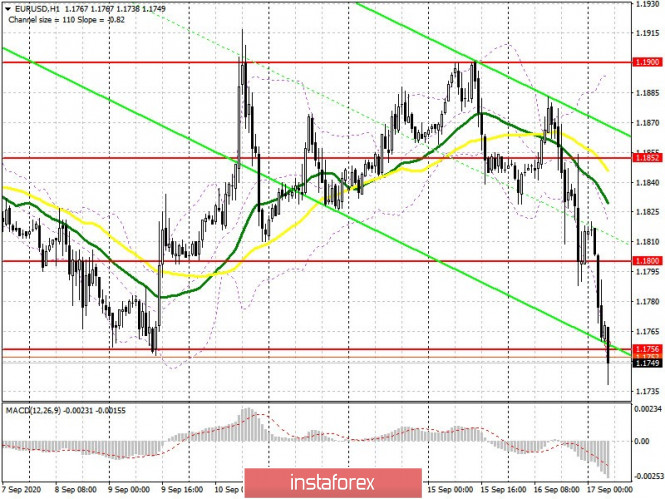 In case of an upward correction, the average border of the indicator in the 1.1810 area will act as a resistance. You can sell the euro on a rebound from the upper border around 1.1890.