Yesterday, I paid attention to longs in the support area at 1.1756 and also analyzed the entry point into long positions in more detail. Look closely at the 5 minute chart. You will see how the bulls regained the 1.1756 area, testing it from top to bottom, thereby forming an excellent entry point into long positions, which brought about 45 points of profit. Then we had a signal to sell the euro from the 1.1800 level, however, since the bears did not try to do anything slightly above this level, and the emphasis in the afternoon forecast was shifted to the resistance of 1.1810, this did not lead to a larger sell-off and instead it continued to rise. Unfortunately, we could not wait for a new convenient entry point for long positions, and the rest of the movement passed by. Today, the key struggle between buyers and sellers will unfold for resistance at 1.1852, around which the trade is now being conducted. A breakout and consolidation above this level, similar to buying from 1.1756, forms a good entry point for long positions. After that, we can expect an upward correction for the euro towards a weekly high of 1.1900, where I recommend taking profit. The 1.1949 area will be the long term target, but it will not be easy to get to it. If the euro is under pressure on the first half of the day, and there are data on inflation in Germany and a number of less important statistics for the eurozone today, then it is best not to rush into longs, but calmly wait until a larger support at 1.1803 has been tested, which is where the moving averages are also concentrated. ... Open long positions from there immediately on a rebound, counting on a correction of 20-30 points within the day.

Let me remind you that the Commitment of Traders (COT) reports for September 8 showed that long non-commercial positions decreased from 250,867 to 248,683, while short non-commercial positions also fell from 54,130 to 51,869. Political uncertainty in the US and central bank meetings forced many traders to wait and see ahead of the fall marathon. As a result, the positive non-commercial net position slightly increased to 196,814, against 196,747, a week earlier.

Euro sellers need to recuperate, since they have a chance to lose everything they won after the Federal Reserve's decision on interest rates. It is necessary to form a false breakout in the resistance area at 1.1852, which forms a good entry point in short positions, thereby allowing us to expect EUR/USD to return to the support area of 1.1803, where I recommend taking profit. I don't think the bears will manage to break through the area below this range, since there are no important reports scheduled for today, except for consumer sentiment from the University of Michigan in the US. A breakout of 1.1803 would pull down the pair to a low of 1.1756. If the demand for the euro persists in the first half of the day, and we don't see bears at the 1.1852 level, it is best to postpone short positions until the high of 1.1900 has been updated and then you can sell the euro from there immediately on a rebound, counting on a correction of 20-30 points within the day. 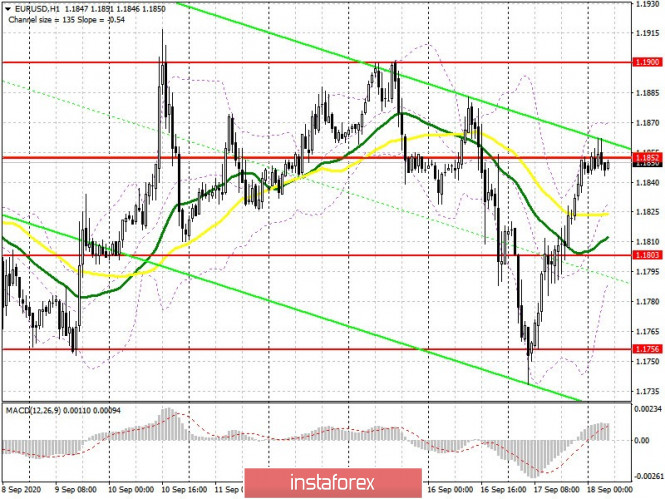 Trading is carried out above 30 and 50 moving averages, which indicates an attempt to intercept the initiative on the part of euro buyers.