EUR/USD: plan for the European session on September 22. COT reports. US dollar regains its strength. Bears wait for breakout

Several excellent signals to sell the European currency appeared yesterday, which brought more than 100 points of profit. Buy positions for the euro were also placed at the end of the day. Let's take a look at the 5-minute chart and break down all these entry points. The very first signal to sell the euro appeared after a false breakout formed at the 1.1868 level. The bulls' unsuccessful attempt in the morning to leave the area above this range and a repeated test of this level from the bottom up formed a good point for opening short positions, which caused the pair to fall to a low of 1.1828, where no one was, and afterwards a larger support at 1.1785 was tested, which transformed it to the 1.1779 level. I recommended selling the euro again after the breakout and consolidation below this range. Everything happened by analogy with the first deal. The breakout of 1.1779 and testing this area from the bottom up formed a new entry point to sell. We could only talk about buying on a rebound from 1.1740, which led to a 30-point correction by the day's close. 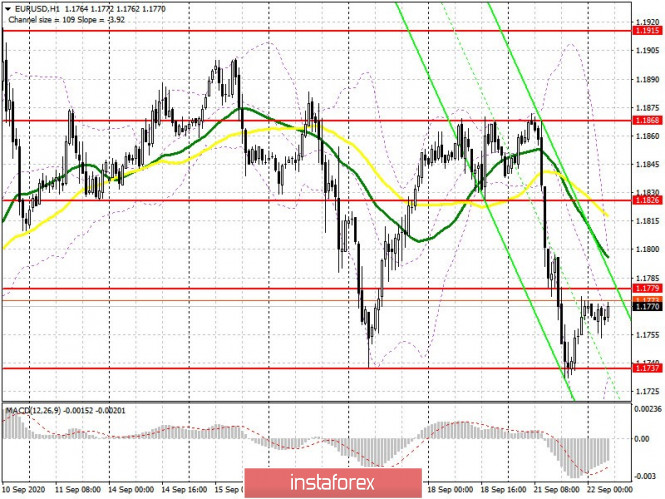 Bulls urgently need to regain resistance at 1.1779 at the moment, since the market's direction depends on it. If they manage to gain a foothold above this range, then you can look at long positions and expect the upward correction to continue to the resistance area of 1.1826, where I recommend taking profits. A high of 1.1868 will be a distant goal. If the euro is under pressure again, then forming a false breakout at the 1.1737 level, after updating this week's low and confirming the divergence on the MACD indicator will become an entry point into long positions. Otherwise, I recommend postponing longs until a new local low of 1.1695 has been tested, or you can open them immediately on a rebound from the larger support of 1.1648, counting on a correction of 20-30 points within the day.

Let me remind you that the Commitment of Traders (COT) reports for September 15 showed a reduction in long non-commercial positions and an increase in short ones, which confirms the downward correction in EUR/USD, which we recently observed. Thus, long non-commercial positions fell from 248,683 to 230,695, while short non-commercial positions rose from 51,869 to 52,199. The decisions taken by the Federal Reserve last week supported the US dollar. and new problems with the spread of coronavirus infection in the EU do not allow euro buyers to seriously expect large players to return to the market. But do not forget that despite the euro's recent decline, the total non-commercial net position, which slightly decreased over the reporting week, still remained at a positive level. As a result, the non-commercial net position decreased to 178,576 against 196,814 a week earlier.

The bears performed well yesterday and now they will focus on protecting resistance at 1.1779. Failure to settle above this level and the test of the moving averages, which are now on the side of the sellers, form a good signal to sell the euro with the hopes of returning support at 1.1737, for which a rather difficult struggle will take place. Settling below this range and ignoring the divergence on the MACD indicator will lead to a new free fall towards the 1.1695 and 1.1648 lows, which is where I recommend taking profits. A bad report on consumer confidence in the eurozone will help the bears meet this challenge. In case sellers aren't active at 1.1779 in the morning, I recommend postponing short positions and wait until resistance has been tested at 1.1826, where you can open shorts immediately on a rebound, counting on a downward correction of 20-30 points within the day. 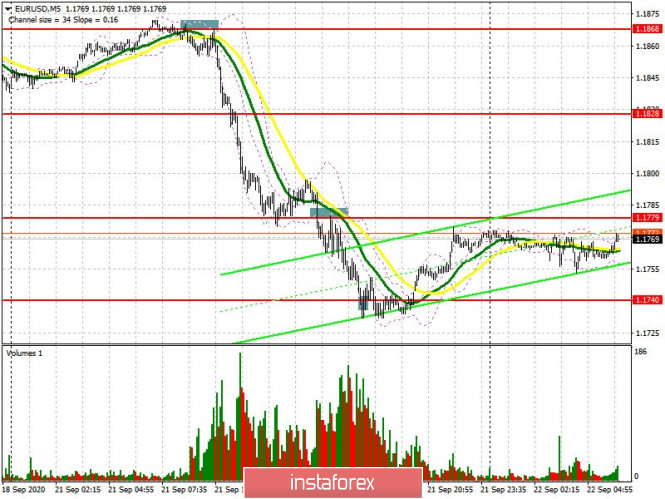 Trading is carried out below 30 and 50 moving averages, which indicates a continuation of the bearish market.