After disappointing data on activity in the eurozone services sector, the European currency continued to fall against the US dollar, returning to the area below 1.1695. There was also an excellent entry point, which I mentioned in yesterday's afternoon review. Let's figure it out. If you look at the 5-minute chart, you will see how the bears quickly regained the 1.1695 level and settled below it, after several unsuccessful attempts by the bulls to climb this range, they continued to pull down the euro into the area of the next target at 1.1648, which was reached at end of the day. The movement was about 50 points. 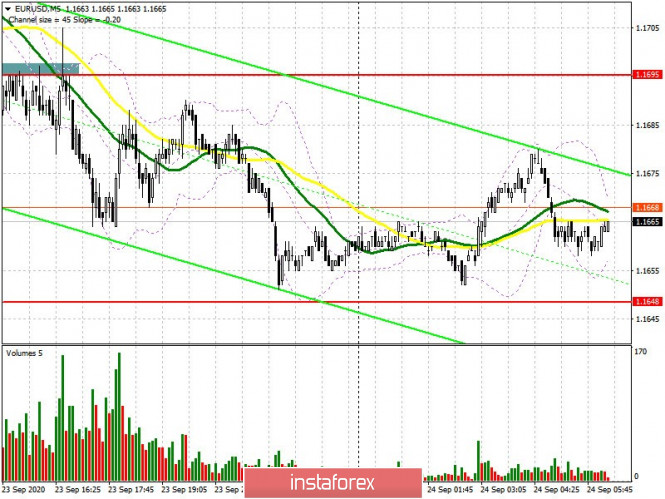 Bulls currently need to protect resistance at 1.1648, because a lot depends on it. So far, the only hope we have is for good data on the indicator of conditions, expectations and the current assessment of the business environment in Germany. If the indicator turns out to be better than economists forecasts in September, which is quite possible, then forming a false breakout at the 1.1648 level will be a good entry point for long positions in the euro, counting on an upward correction to the high of 1.1695. However, we can talk about continuing EUR/USD growth only after we have confidently settled above this range, which will open a direct road to the highs of 1.1737 and 1.1779, where I recommend taking profits. In case the euro falls further, and this is more likely, it is best not to rush to buy, but wait until the bears' weekly target has been updated - the 1.1585 level and then you can buy from there immediately on a rebound, counting on a correction of 30-40 points within the day.

Let me remind you that the Commitment of Traders (COT) reports for September 15 continued to record a reduction in long non-commercial positions and an increase in short ones, which confirms the downward correction in EUR/USD that we recently observed. Long non-commercial positions fell from 248,683 to 230,695, while short non-commercial positions rose from 51,869 to 52,199. The decisions that the Federal Reserve made last week supported the US dollar. and new problems with the spread of coronavirus infection in the EU do not make it possible for euro buyers to seriously expect large players to return to the market. But do not forget that even though the euro has fallen, the total non-commercial net position, which slightly decreased over the reporting week, still remained at a positive level. As a result, the non-commercial net position fell to 178,576 against 196,814 a week earlier.

Sellers keep the market under their control, and all they need in the morning is to form a false breakout in the resistance area of 1.1695, which will increase pressure on the euro and lead to a new wave of decline for the pair, falling to a low of 1.1648. Testing this area for the second time will certainly come with a breakout, therefore, focus on Germany's fundamental data in the morning, since only this can hold back the influx of euro sellers for a while. Settling below 1.1648 forms a new entry point for short positions on EUR/USD which aims to test the low of 1.1585, where I recommend taking profits. In case the euro grows in the first half of the day after the data has been released and there also isn't much activity in the resistance area of 1.1695, which is where the moving averages also play on the bears' side, then it would be best to postpone shorts until the larger resistance of 1.1737 has been updated and afterwards open sell positions from there immediately on a rebound, counting on a downward correction of 20-30 points by the end of the day. 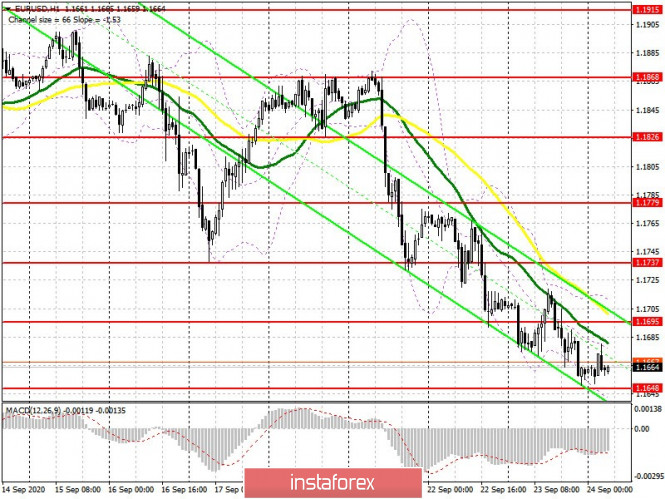 Trading is carried out below 30 and 50 moving averages, which indicates a continuation of the bearish market in euros.