EUR/USD: plan for the European session on September 29. COT reports. Buyers of the euro looking forward to an upward correction

Yesterday afternoon, the signal to buy the euro worked perfectly after a breakout and consolidating above the 1.1640 level, which I drew attention to in my forecast and is also where I recommended opening long positions. If you look at the 5 minute chart, you will see how the bulls achieved a breakout and settled above the 1.1640 level, afterwards the euro continued to rise. And even if you did not have time to enter buy deals on the first signal, after declining and testing the 1.1640 area for the second time, it was also possible to open long positions in anticipation of a new wave of EUR/USD growth, which happened. 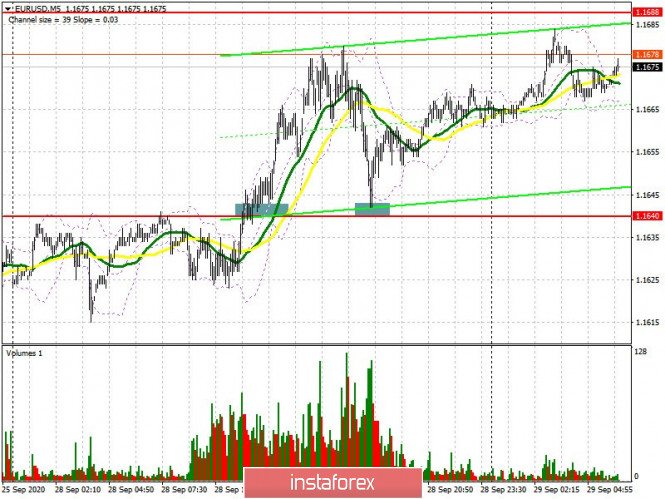 At the moment, the technical picture has not changed much compared to the previous day, and the main task of the bulls is a breakout and to settle above last Friday's high (1.1688). Afterwards, you can open new long positions in order to continue the upward correction and move towards the 1.1734 area, which is where I recommend taking profits. A breakout and consolidation above 1.1688 can also lead to removing sellers' stop orders, as was the case with the British pound yesterday, which will strengthen the upward correction in the pair. In case EUR/USD falls in the first half of the day, returning and testing 1.1640 while the price is staying above this level will also be a signal to buy the euro. If bulls are not active in this area, then it is best to postpone long positions in EUR/USD and wait until lows of 1.1585 and 1.1541 have been updated, from where you can buy the euro immediately on a rebound, counting on a 20-30 point correction within the day.

Sellers need to rehabilitate, and this can only be done by defending the resistance at 1.1688. Forming a false breakout at this level, along with the release of weak fundamental data on the indicator of consumer confidence in the eurozone, as well as inflation in Germany - all this forms a good entry point to short positions in the hopes of pulling down the rate to a significant support at 1.1640, which might shed light on the pair's direction. Returning to this level, followed by testing it from the bottom up, produces an additional entry point to short positions while counting on the bearish trend to continue, which will open up a direct prospect for the euro to fall to the area of lows of 1.1585 and 1.1541, which is where I recommend taking profits. If the bulls turn out to be stronger and continue the upward correction in the pair, and this will only happen in case of a breakout of 1.1688, then there is no need to rush to sell. It is likely that rumors of a UK-EU trade agreement will continue to provide temporary support to the pair. Selling in such a scenario is best done once the 1.1734 high has been updated, counting on a 20-30 point correction within the day. 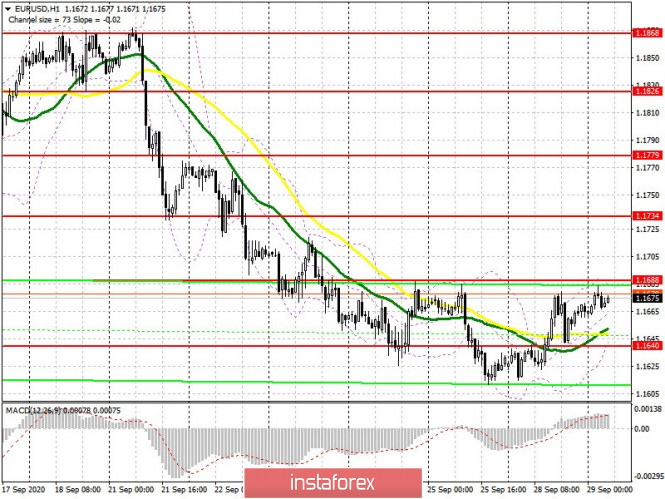 Trading is carried out slightly above 30 and 50 moving averages, which indicates the possibility of an upward correction in euros.

Interesting? Write a comment below.
 #EUR/USD: plan for the European session on September 29. COT reports. Buyers of the euro looking forward to an upward correction
Forward 
Backward 