EUR/USD: plan for the European session on September 30. COT reports. Lagarde's speech can weigh down the euro, but buyers

The euro strengthened during the US session, and the US data on the consumer confidence indicator did not provide significant support to the dollar. The 5-minute chart clearly shows how the bulls took resistance at 1.1688 in the morning, settling on this area made it possible to update weekly highs. The 1.1734 target was reached, from where I advised you to open short positions in anticipation of a downward correction, which happened. 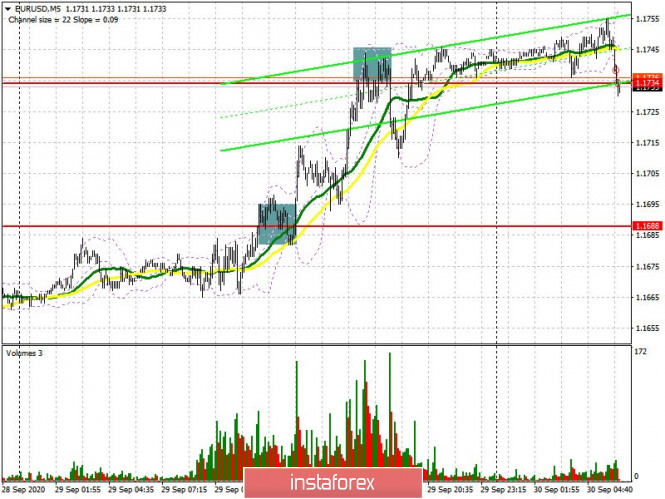 The current situation is rather difficult, since the 1.1734 level is vague and it is not entirely clear how things will proceed. European Central Bank President Christine Lagarde's speech could put pressure back on the pair. Therefore, I recommend opening long positions from 1.1734 only when a false breakout forms on 1.1734, with the main goal of rising to a high of 1.1779, which is where I recommend taking profit. Consolidating above 1.1779, due to good fundamental data for the eurozone countries, will make it possible to increase long positions with the goal of updating 1.1826. In case EUR/USD falls below the 1.1734 level in the first half of the day, I recommend waiting until support at 1.1688 has been updated, slightly above which the moving averages pass, and opening long deals from there immediately on a rebound, counting on a correction of 20-30 points within the day. It is also possible to buy the euro immediately on a rebound from the low of 1.1640, testing it will lead to a reversal of the entire upward correction that has been observed this week.

Sellers need to rehabilitate, and this can only be done by returning EUR/USD to the support level of 1.1734. Testing it from the bottom up on the reverse side forms a new entry point into short positions with the main goal of falling to the support area of 1.1688, which is where the moving averages pass, playing on the side of the bulls. The 1.1640 level will be a distant target, where I recommend taking profits, but this is only applicable if Lagarde mentions the need for additional stimulation of the European economy in the face of a new wave of the coronavirus pandemic. If the EUR/USD pair continues to strengthen its positions, then you should return sell positions after the pair grows and a false breakout appears in the resistance area of 1.1779. I recommend opening short deals immediately on a rebound only from a larger high of 1.1826, counting on a downward correction of 20-30 points within the day. 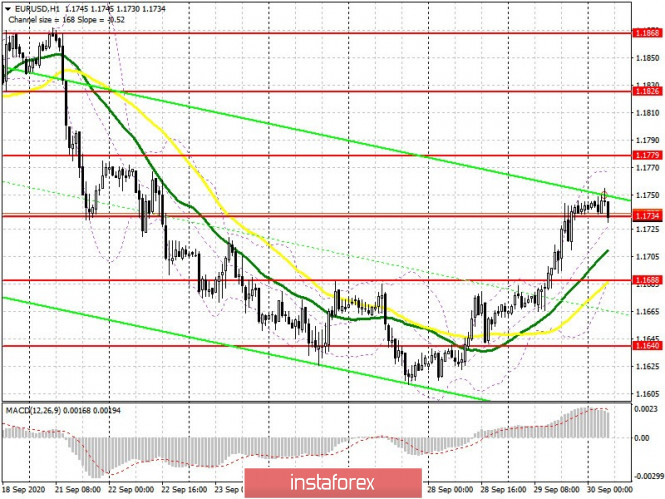 Trading is carried out above 30 and 50 moving averages, which implies that an upward correction will form in the euro.

Interesting? Write a comment below.
 #EUR/USD: plan for the European session on September 30. COT reports. Lagarde's speech can weigh down the euro, but buyers
Forward 
Backward 