Fed has tough questions to answer which can lead to rising tension. Overview of USD, CAD, and JPY

Markets are in a state of high uncertainty ahead of a key Fed meeting, as they need new benchmarks. This means that market participants do not fully understand what the Fed is going to do in terms of targeting average inflation. On the one hand, the risk of an increase in the pace of quantitative easing is clearly growing, while on the other hand, the Fed may take a break until a new stimulus package from the US Congress (which Powell directly mentioned) will develop. In turn, Congress will do nothing until the outcome of the presidential election in November.

Consequently, given the sharp increase in the budget deficit, the United States faces the possibility of a shortage of funds for operating expenses. This situation is almost the first time in recent history, so tensions are likely to grow.

Therefore, we should expect an increase in demand for defensive assets and a decline in commodity currencies in the long term. Gold will consolidate above $ 2,000 per ounce, while oil's prospects are still unclear.

The Canadian dollar showed the maximum growth in the futures market. According to the CFTC report, the net short position immediately declined by 756 million, which ultimately made it possible to revise the long-term forecast – the estimated level of the fair price after the correction is directed down again, which means that CAD may continue to strengthen. 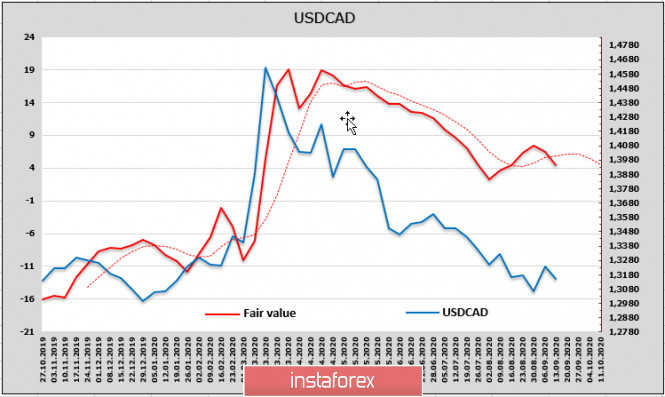 At the same time, the Canadian currency is clearly hindered by the weakening of oil prices and so, it has not yet been possible to take advantage of the resulting advantage. In any case, any changes should be expected only after the FOMC meeting, since the Canadian economy cannot provide its own drivers for strong movements. As expected, the Bank of Canada left the policy unchanged and did not present any new ideas. The head of BoC, Macklem, diligently ignored all sensitive topics during a press conference, as if he set himself the task of not allowing the disclosure of possible actions after September 17.

Macroeconomic data was also practically not published, but the situation will change starting today. On Wednesday, there will be data on the movement of foreign capital and a report on inflation, while on Friday, there will be retail sales for August. The main question that will need to be answered is: does the trend for strengthening the dollar begin before the US presidential election, or will it be postponed indefinitely? A partial response will be received on Wednesday after the FOMC meeting.

Technically, USD/CAD on the daily chart is still in a bearish trend. For the trend to change, you need to consistently pass two resistances 1.3250 and 1.3310, which is only possible if the Fed gives a hawkish signal. If the market regards the results of the meeting as dovish, then USD/CAD will have to retest the level of 1.2950.

Despite the fact that the demand for risk has slightly declined recently, the yen looks like an outsider against the dollar. The net long position in the futures market was reduced by 929 million, which is a strong contraction. The fair price continues to rise, indicating a rising probability of a stronger bullish trend. 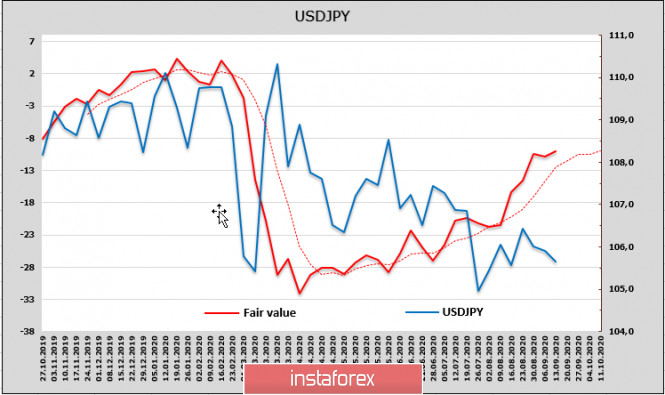 Monday's decline in USDJPY is a reaction to short-term factors and cannot serve as a basis for a change in the long-term outlook on the yen. There are two factors – a positive report on industrial production in July and the appointment of Yoshihide Suga as leader of the LDPJ, which means the end of the political crisis after Abe's resignation, since the LDPJ has a parliamentary majority.

Perhaps, Japan is waiting for a change in political course, since Abenomics did not give the expected result. Mizuho Bank cites the results of a study on the mentions of Abenomics in the Japanese media, which obviously has reliably lost popularity. It is clear that the movement of USD/JPY can only start after the FOMC meeting. Judging by the change in the speculative positions of large investors, the most likely direction is up, that is, the yen will weaken and the dollar will strengthen. The nearest resistance target is 106.20/30, while the next one is 106.95/107.05. After which, we can rise now to the level of 110 – medium-term goal for the period before the November US elections will begin.

Interesting? Write a comment below.
 #Fed has tough questions to answer which can lead to rising tension. Overview of USD, and JPY, CAD
Forward 
Backward 