So we are approaching the ECB meeting, and as is almost always the case, from a technical point of view, the euro approached this event in a neutral stance. At the same time, the financial media carefully presented various opinions about the central bank's upcoming assessment of economic prospects. If the ECB really intends to lower the euro (protect the 1.20 level), which is already rumored since the central bank suggested it, then ECB President Christine Lagarde only has verbal tools, up to threats to lower the rate again "if the situation worsens". The daily chart shows that the price stopped at the MACD line, and the Marlin oscillator is in the lower area. As before, we are waiting for the price to break through, but this may happen after spikes in both directions, since major players are very eager to take positions accumulated before such an intriguing ECB meeting. 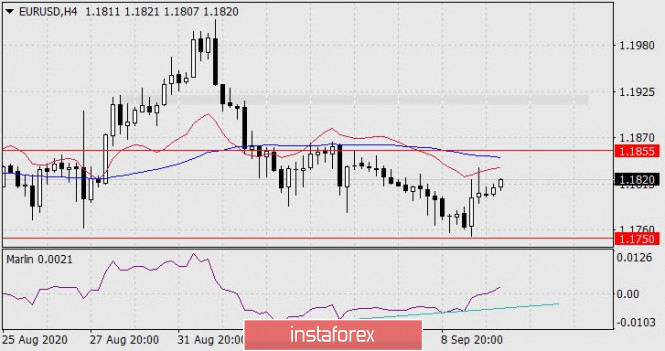 The four-hour chart shows the price in the 1.1750-1.1855 range indicated earlier. Not strong, but a double convergence on the Marlin oscillator with the signal line entering the zone of positive values indicates a more probable primary price surge. Of course, it is not limited to the 1.1855 level. There is a small accumulation zone in the 1.1925 area.