The euro, having felt little resistance, grew by 18 points on Monday, following the momentum of the previous days. Meanwhile, British MPs in the second reading passed a law on the internal market last night, contrary to international law (which is what Prime Minister Boris Johnson meant when he spoke of the superiority of British laws). The law is sent to the authorities, and this cannot but put pressure on both the pound and the euro. 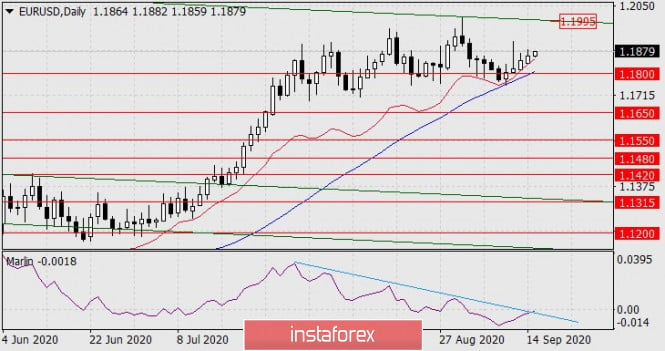 The price is above the red balance indicator line on the daily chart, above the MACD line (blue), but the Marlin oscillator signal line touches its own trend line near the border of the growth area. The price could reverse from the current levels. If the price moves under the MACD line, below the 1.1800 level, it will cause the euro to fall towards the first target of 1.1650.

But this has not happened yet, therefore, this plan may not be realized and the price will continue to rise to the upper border of the price channel in the 1.1995 area. 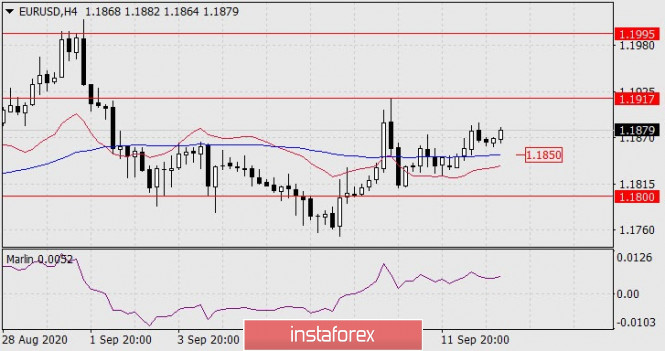 The price settled above the MACD line on the four-hour chart, while Marlin is in the growing trend zone. Breaking through the September 10 high (1.1917) is a signal that the price could rise to 1.1995. But the price did not break far from the MACD line, and the line itself moves horizontally, that is, the prospects for a short-term trend is not very noticeable. The option that the price would move down has a 45% probability. We are waiting for the development of events. Probably, the final choice will take place at the Federal Reserve meeting tomorrow.