Yesterday, the euro began to decline in anticipation of the results of today's Federal Reserve meeting on monetary policy. The business press is dominated by the mood about the softness of today's meeting, this is likely, but the content of this "softness" is not taken into account, let's say the meeting will be with "soft power". The heart of the matter is the Fed's forecasts for the economy and inflation, and they can be optimistic, which could shift Chairman Jerome Powell's reservations in the hawkish direction. Sales on the secondary housing market for August will be released on Tuesday next week (September 22), forecast 5.95 million y/y against 5.86 million y/y in July. New home sales (September 24th) are expected to rise 1.3%, while durable goods orders are forecast to rise 1.5%. There are no forecasts for inflation yet, but they simply cannot fail to increase, since the economy, especially individuals, experienced an almost surplus of cash in summer.

So we are looking forward to a more hawkish speech from Powell than the average business press expects. 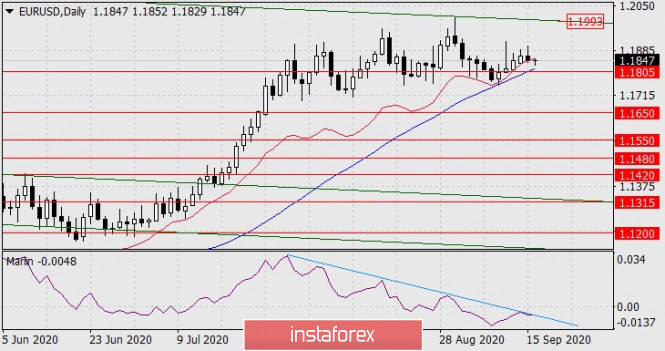 The daily chart shows that the price is already close to the support of the MACD indicator line. Settling below it (1.1805) will cause the price to fall to the first target of 1.1650. Overcoming the level opens the second target of 1.1550. It is also noteworthy that the signal line of the Marlin oscillator does not go beyond its own descending trend line. 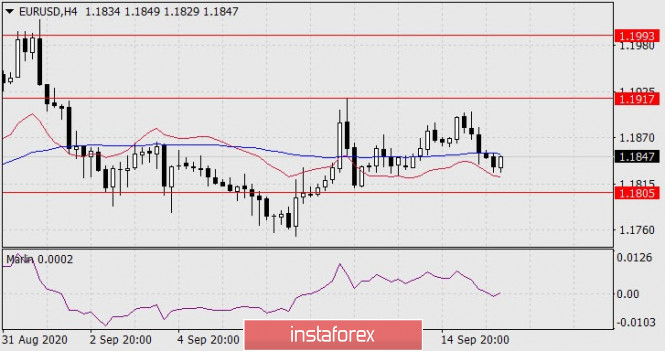 The price settled below the MACD line, while the Marlin oscillator entered the downward trend zone on the four-hour chart. We look forward to the euro's decline.