The euro lost 30 points as a result of the Federal Reserve meeting. News agencies report that the dollar strengthened due to a split within the FOMC, as the general summary of the meeting was adopted with the wording of keeping low rates until the end of 2023, but two opposed this formulation: Robert Kaplan and Neil Kashkari, who considered that the issue of rates need to be more flexible.

But the euro mainly fell due to the news of the growth of retail sales in the August estimate by 0.6%, afterwards the single currency dropped 50 points, and the day closed at the level when the Fed's release was published. The volume of trading at the time of the Fed's monetary policy decision was twice as large as at the release of retail trade data, but it seems that the upper levels were protected.

We assume that investors simply ignored the FOMC's decision to keep rates low for a long time, since Biden's victory at the current stage is beyond doubt and a lot can change in the Fed's policy. 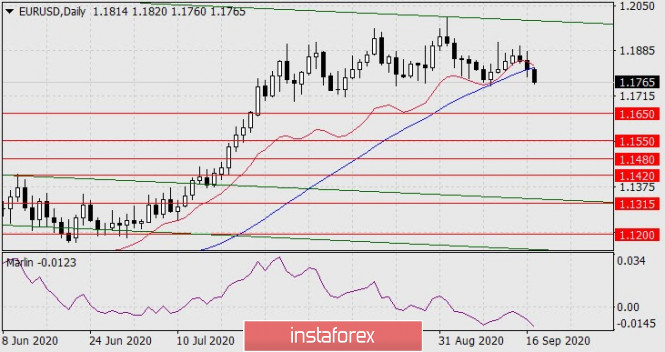 The daily chart shows that the price overcame the MACD line, while the Marlin oscillator is moving down. The euro is aiming for 1.1650. Consolidating below the level opens the second goal of 1.1550. 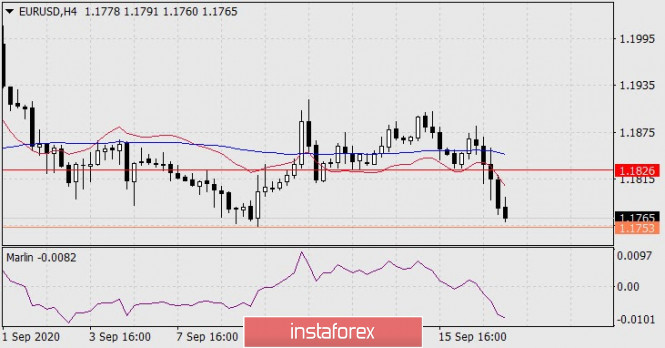 The price settled under both indicator lines on the four-hour chart - the balance line (red) and the MACD line (blue). Marlin falls. The situation is completely going down.

However, the price is approaching a strong technical level of 1.1753, from which it has reversed by more than 100 points twice on August 21 and September 9, so there is a high probability of a price correction. But it is not deep, up to the 1.1826 level, where the MACD line is located on the daily scale.