On Thursday, the euro fully won back all the negative effects the Federal Reserve meeting had caused on Wednesday. Trading volumes were slightly lower than on the day the monetary policy decision was announced, which means more than a 100% correction. Perhaps the euro will continue to grow for some time, or it might trade sideways in the range it did for the last two and a half months. 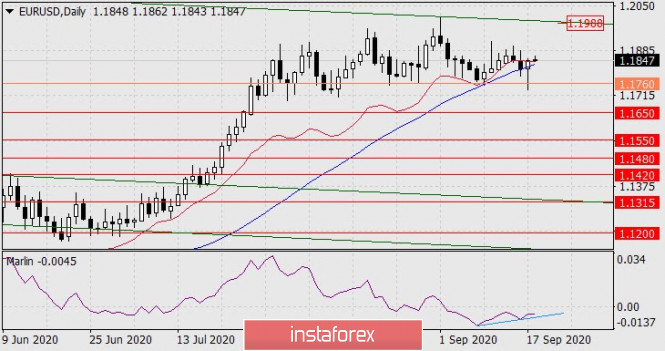 The price went above both indicator lines on the daily chart - the balance line and the MACD line. The Marlin oscillator has formed a small convergence, further enhancing the local growing mood. Perhaps, as part of the consolidation, the euro will grow to the upper limit of the price channel, in the 1.1988 area. This level may not be reached, as is the case with a sideways/horizontal trend, also, the euro has strong levels ahead, 1.1917, 1.1966 in particular. It is possible for the price to move down after a reliable consolidation below the MACD line (1.1825), but we can judge the price's final exit from the range down when the euro falls below the lower limit of 1.1760. 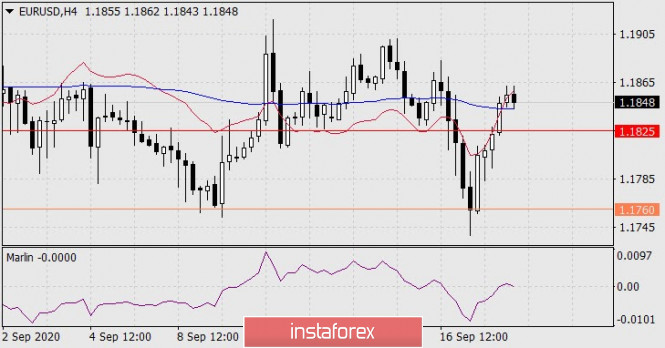 The price settled above the MACD line on the four-hour chart, while the Marlin oscillator entered the zone of positive values this morning. Both signals are weak, but nevertheless the price intends to continue growing, even if it is short-term.

Today the situation is unlikely to be resolved, so we expect the price to continue moving sideways. The probability of continued growth is at 65-68%.