The euro has reached the nearest target level of 1.1650 yesterday, and this morning, it is correcting slightly upwards with the support of the Marlin oscillator turning to the upside. 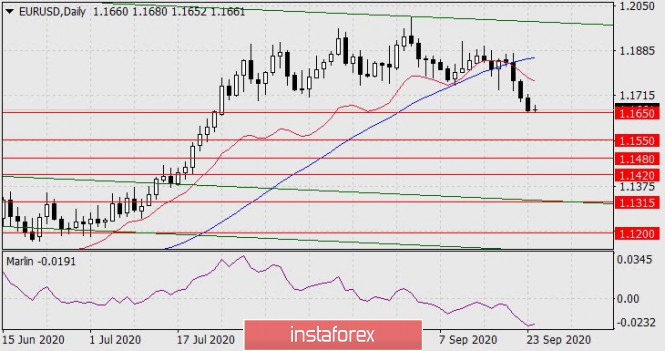 Correction, or consolidation before reaching the target support may last for the entire day. The data on new home sales in the US for the month of August will be released today, and the forecast is a slight decrease to 890,000 against 901,000 in July. In general, the achieved indicators are at the levels of the first quarter of 2007, at the peak of construction development before the mortgage crisis, but investors would like to see even better indicators. 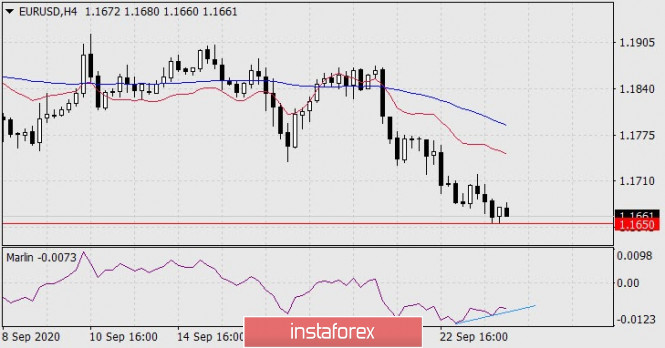 The Marlin has formed a small convergence on the 4-hour chart. This element fits well into our proposed version of today's flat. Volatility could increase with the release of data on applications for unemployment benefits, since the Federal Reserve last spoke about prioritizing the labor market, and at the beginning of the week, the head of the Federal Reserve Bank of Chicago, Charles Evans, suddenly announced that the US central bank could raise the rate even before inflation reaches 2.0 % (as we assumed earlier). Therefore, it would be good for investors to carefully think over today's indicators. And they can start taking action when data on orders for durable goods is released on Friday, which will confirm (or not confirm) today's data. In any case, the price going below 1.1650 is a signal for new short positions. Aim for 1.1550.