The euro fell by 37 points on Tuesday, still hesitating to take decisive action, as is the case with the pound, or at least with the aussie. Investors may still be hoping for positive messages from the European Central Bank on Thursday, but the ECB will not rush to sound an alarm on Brexit, and the negative pressure from the UK is growing every day. But on the technical side, the euro quote will have to deal with the support of the MACD line on the daily chart, this is the 1.1750 level. The price falling in the area under it opens the first target at 1.1650. The medium-term prospect for a decline of 1.1315 is support for the embedded price channel line. It is marked in green on the chart. Taking the euro's resilience to the current political turmoil into account, we assume that the price will move from side to side until tomorrow's ECB meeting. 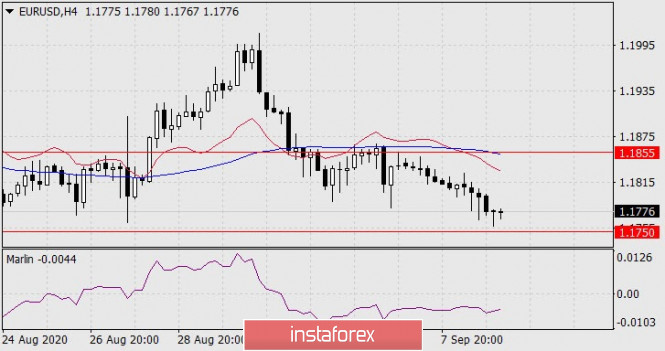 The price is slightly correcting from the key level of 1.1750 on the four-hour chart. The leading Marlin oscillator is in no hurry to decline, which may also play into the euro's hands in its desire to take a closer look at the external situation and clarify the central bank's intentions. The upper limit of the waiting range is determined by the MACD line - the level 1.1855.