GBP/USD. Boris Johnson – the" destroyer " of the British economy 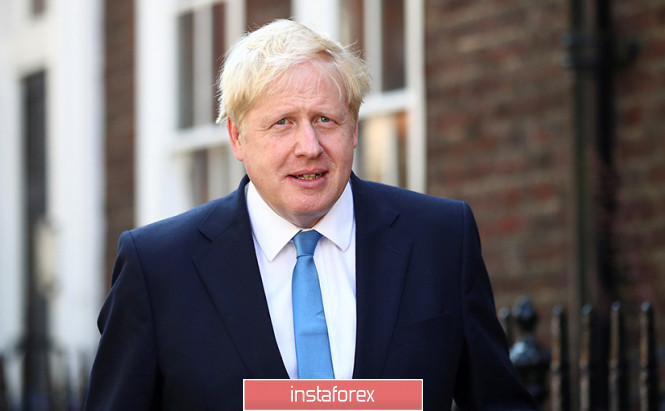 Perhaps the title of the article is too pretentious and loud. After all, it is rare when it happens that one person is behind some global event of national or world significance. Although this has happened in world history. We would just like to remind you once again of the football expression "The result is on the scoreboard". It means that they will always be judged by the result and only the result will be remembered by everyone. This is approximately the situation now in America and the UK, which are ruled by "friends" Donald Trump and Boris Johnson. Everything about Donald Trump was already written in the first article. No matter how much he boasts that the economy has flourished under him, no matter how much he claims that the whole of America has perked up under him, everyone will still remember the 32% drop in GDP, the trade conflict with China, mass rallies and protests caused by racist scandals, several suspensions of the government and public services due to lack of funding, the impeachment process, which lasted about a year, several high-profile dismissals from the White House, and other scandals. Thus, if Joe Biden is elected President in November, then Trump will leave his post as one of the worst presidents (judging by the results) in the entire history of the country.

However, let's return to the figure of Boris Johnson, thanks to which the pound has been falling since September 1. He came to power last summer like someone who is truly capable of bringing Brexit to an end. Moreover, Boris Johnson did not decide anything. He has not found a way to break up with the EU in a way that suits the opposition and the entire British Parliament. For several months, Johnson fought with Parliament in the same way as his predecessors, who also could not find a common language with the majority of deputies. After that, Johnson proposed to hold new elections to Parliament and the main opposition leader (the leader of the Labor Party, Jeremy Corbyn) agreed, considering that he could support the British. However, in practice, it turned out that the British want only one thing – to quickly complete the "divorce" with the European Union. Even then, it was obvious that it was impossible to reverse the process. Although the European Union has stated several times that if London wants to, it can still stay in the EU. However, Johnson dismissed such an option, and Corbyn suggested a second referendum, in which all Britons can once again express their will. Corbyn himself did not have an opinion on what to do next with Brexit. And, according to most experts, this is what played a cruel joke on him. In the parliamentary elections, the Labor Party suffered a crushing defeat, and Jeremy Corbyn resigned. The British have put all power in the hands of the Conservatives, who now absolutely do not need the support of any of the parties to pass any bill. Last year, we wrote that this is very bad for any democratic country. Because, in fact, democracy is killed by the lack of opposition. This is the current situation in the UK. Johnson can pass any bill using the votes of only his own party members.

However, we will not get ahead of ourselves and return to the "coronavirus". Without going into details, we can safely conclude that the British government failed in the fight against the epidemic. It was in the Foggy Albion that the largest number of deaths was recorded among all European States. The Kingdom was also in the leading positions in terms of morbidity. At the same time, it should also be noted that in Scotland, Wales, and Northern Ireland, there were much fewer cases of the disease and deaths. In these countries, there is a semi-autonomous mode of operation of the authorities. They could set the rules and terms of quarantine themselves. They installed it without following the recommendations of London. In the end, it was England that suffered almost the most in Europe.

There was a lull for several months, no laws were passed, Brexit negotiations were conducted exclusively in the format of a video conference, so there was no news from the UK. And then autumn came. In early September, it became known about the failure of the seventh and eighth rounds of negotiations on an agreement that would begin to operate after the end of the "transition period" and regulate the new relations between the European Union and Britain. However, when this happened, it became clear to almost everyone will not agree, since no one wants to give in. Therefore, formally, the negotiations continue and may continue for a month, however, they will not give any result. We are inclined to believe that Boris Johnson was initially not going to make any concessions and wanted to sign the agreement solely on his own terms. However, he failed to implement this idea (like many others before) and simply set a deadline for negotiations and announced a bill that violates the agreements between the EU and Britain on the Northern Ireland border.

Naturally, the bill "on the internal market of Great Britain" is explained by Boris Johnson by the interests of the country. They say that all four countries should have the same access to the British market, without any exceptions or restrictions. However, in practice, this bill, which has not yet been supported by the Parliament, is a direct violation of international law. The European Union, the United States, and even Wales, Scotland, and Northern Ireland have already condemned Johnson's bill, however, the Prime Minister is not going to back down and asked parliamentarians to vote "yes" to it. If Parliament grants Johnson's request (recall that the conservatives have the necessary majority to pass any bill without looking at other parties), then there is no doubt that a conflict will begin between the European Union and the UK. Sanctions, trade restrictions, and courts are possible. It is unlikely that Brussels will simply turn a blind eye to the fact that London just crossed out some points of the previously reached agreement on Brexit. Accordingly, retaliatory measures will follow in any case. And only one person will be responsible for everything that happens – Boris Johnson. 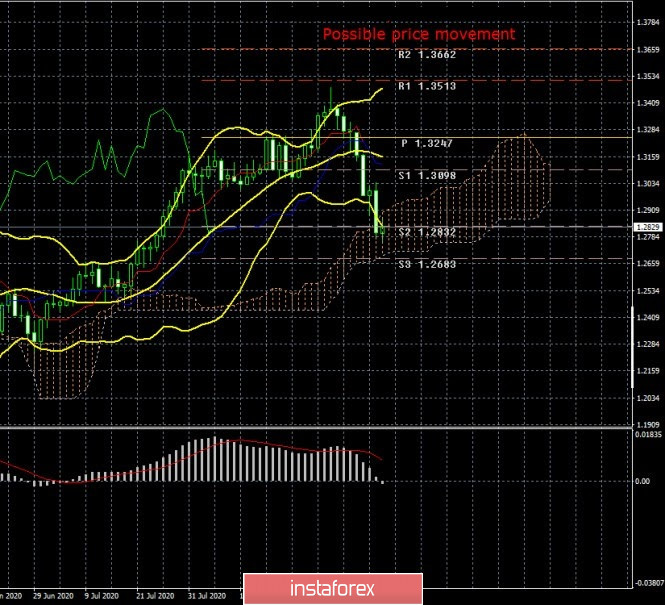 The pound/dollar pair continues its strong downward movement. The pair entered the Ichimoku cloud on the 24-hour timeframe and is now moving towards its lower border. Since the current fall in the pound depends entirely on the fundamental background of the UK, it can theoretically continue for as long as you want. However, a price rebound from the Senkou Span B line may still trigger a round of upward correction. Fixing the price below the Ichimoku cloud will increase the probability of the pair continuing to fall.