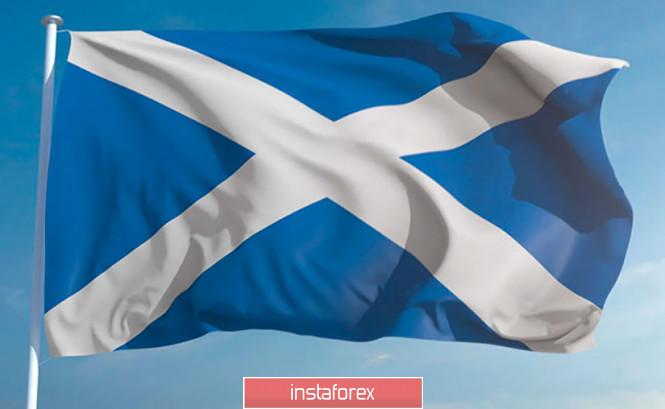 The Scots are actively thinking about leaving the United Kingdom in the past few years. In 2014, an independence referendum was already held in Scotland with the permission of London, the results of which showed that the majority of Scots want to remain part of the United Kingdom. However, at that time, no one in the UK knew about Brexit (perhaps other than the highest political forces). Thus, two years later, when the UK decided to leave the EU with "as much as" 52% of the vote, Scotland immediately opposed this option, and then wanted to hold a new referendum, "because the conditions have changed". There is no doubt that if a new referendum were held now, its results would no longer be in favor of London and Scotland would start its Brexit. However, as Boris Johnson correctly pointed out, Edinburgh cannot hold referendums on independence every 5 years. Thus, London is not going to grant Edinburgh a new right to hold a referendum in the coming years for sure. In fact, for Edinburgh and Minister of Scotland, Nicola Sturgeon, there is only one option left – an unauthorized referendum. And will Sturgeon take this step of direct conflict with London?

It should be noted immediately that the number of Scots who do not support the UK is about the same as the number of Britons who do not support the EU. In other words, the British did not have a clear general opinion in 2016, and the Scots do not have it now. Various opinion polls show that approximately 55-56% of Scots support leaving the European Union, which means that 44% of the country's population will oppose it. This means that even in this case, almost half of the citizens will end up with the option that they do not support. And if the "losers" do not lose much in the elections to Parliament or Prime Minister, since the country's policy cannot be changed dramatically in a few years, then in a situation with a possible "Brexit" almost half of the country will be forced to live differently from what it lived before for three centuries. Scotland will come out of Britain and immediately there will be borders with Wales, England, and Northern Ireland. And the countries that are part of the United Kingdom are about the same as the countries that are part of the former USSR. A huge number of Scots live in England and vice versa, a huge number of relatives of Scots live in the rest of the UK. In times between countries, there will be borders, customs, and checks. The same applies to businesses that have worked for 300 years within the framework of a single economic system with England, Wales, and Northern Ireland, and they will have to adapt to new realities, customs, duties, and restrictions, just as British businesses now need to adapt to the new realities of trade with European companies. 44% of the Scottish population does not support this option. Thus, if Scotland initiates an exit from the UK in any way, it may turn out to be the same long-standing "Brexit".

Nicola Sturgeon, who has repeatedly asked Boris Johnson to allow Edinburgh to hold a referendum, however, is not going to rush things on this issue. The First Minister of Scotland wants to wait for the parliamentary elections, where the position of her party can be further strengthened. After that, the Scottish leader may start putting pressure on London again.

In general, the UK may soon face not only new economic problems but also geopolitical problems that will lead to a lot of new economic and social problems. Unfortunately, the EU continues to fall apart. It's just that it's not fast. How many years has the European Union been created and acquired its present form? So far, the case has been limited to the UK alone, but in the future, other countries will want to leave the European Union and, as we can see, some countries also want to leave the jurisdiction of others. Thus, the very long-term prospects of the pound, from our point of view, remain quite unattractive. The United States of America is unlikely to break up into separate states. Thus, they only need to solve their internal problems, which were actively created by Donald Trump in the last few years. Economic power cannot be lost in a short period. So whatever it is now, the United States remains the country with the strongest economy in the world. Thus, if Trump does not become the next president of the country, then we can expect that the situation will improve in the coming years. In the case of the UK, everything is more complicated. We believe that the situation will only get worse, and the Kingdom may also face a political crisis in the coming years, as we still believe that Boris Johnson gave the UK nothing but the completion of the "divorce" process with the European Union. 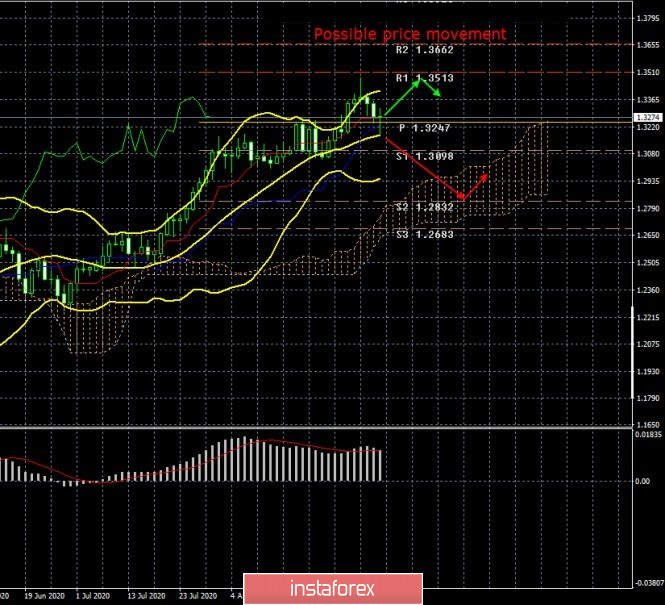 The pound/dollar pair continues its more pronounced upward movement on the 24-hour timeframe. Thus, unlike the euro, the British pound continues to get more expensive in pair with the dollar, which raises more and more questions every day. However, the technical picture is the same now, and there is nothing you can do about this discrepancy with the fundamental background. At the moment, the pair has corrected the critical Kijun-sen line. A price rebound from this line may trigger a resumption of the upward trend.