GBP/USD: plan for the European session on September 1. COT reports. Pound continues to rise amid US dollar's weakness

Despite the continuation of the bull market for the pound, it was quite difficult to trade the British currency yesterday, and all the signals that formed during the day did not provide the expected profit. Let's figure it out. On the 5-minute chart, you can see that a false breakout formed after the first test of the 1.3324 level, which became a signal to enter long positions in anticipation of continuing the bullish trend. However, there was no upward movement and the pair returned to the 1.3324 level, allowing it to exit the market without any losses. Then a signal formed to sell the pound after testing the 1.3324 level from the bottom up, but even then the market did not go down, as we would like. Then the pound sharply grew, which led to the resistance of 1.3386, where it was possible to sell on a false breakout. The movement was around 20-25 points. According to the futures market, traders are not very eager to participate in the events that await them in September, namely, Brexit talks with the EU on a trade deal and the Bank of England's decision on monetary policy.

The Commitment of Traders (COT) reports for August 25 recorded a reduction in long positions, as well as a decline in short positions. This suggests that players are leaving the market, those who want to lock in profits at current highs in anticipation of very strong market fluctuations in the future. The COT report also indicates that there was a reduction in short non-commercial positions from the level of 47,806, to the level of 39,790 during the week. Long non-commercial positions declined more significantly from the level of 54,310 to the level of 45,390. As a result, the non-commercial net position also slightly fell, but remained in positive territory at 5,600, up from 6,504 a week earlier.

As for the current technical picture, today's main task for buyers of the pound is to maintain the support of 1.3386 in the morning, where a false breakout will be an excellent signal for entering the market while expecting to continue the upward trend that can push the pair to a new high of 1.3437. Consolidating at this level forms another entry point to long positions, relying on the area of 1.3478 and 1.3523, where I recommend taking profits. In case there are no active purchases in the support area of 1.3386, the more rational level for opening long positions will be the area of 1.3324, where the moving averages also pass. You can also buy the pound immediately on the rebound from the support of 1.3271 based on a correction of 30-40 points within the day. 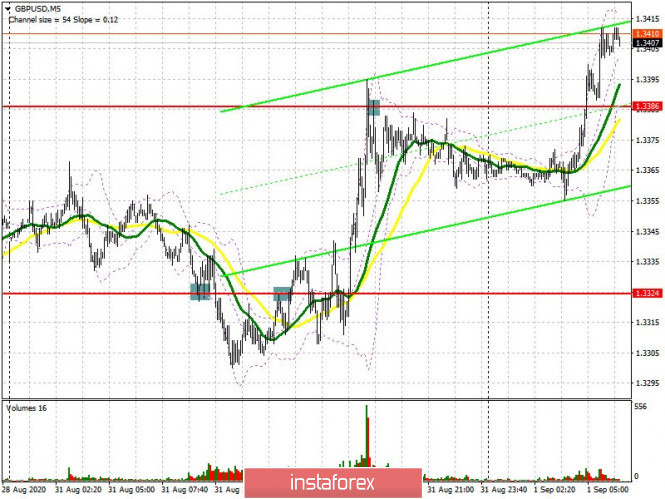 Sellers can only rely on a weak PMI report for the manufacturing sector, which may limit the current bull market. But a false breakout in the resistance area of 1.3437 will be the first signal to sell the pound in current conditions. If there is no activity at this level and there is positive activity in the UK manufacturing sector, it is best to postpone short positions to test the high of 1.3478, or sell the pound even higher from the resistance of 1.3523 based on a correction of 30-40 points within the day. An equally important goal for the bears is to return and settle below the 1.3386 level, which forms a signal to open short positions in anticipation of GBP/USD falling to the support of 1.3324, where I recommend taking profits. The long-range target will be a low of 1.3271. 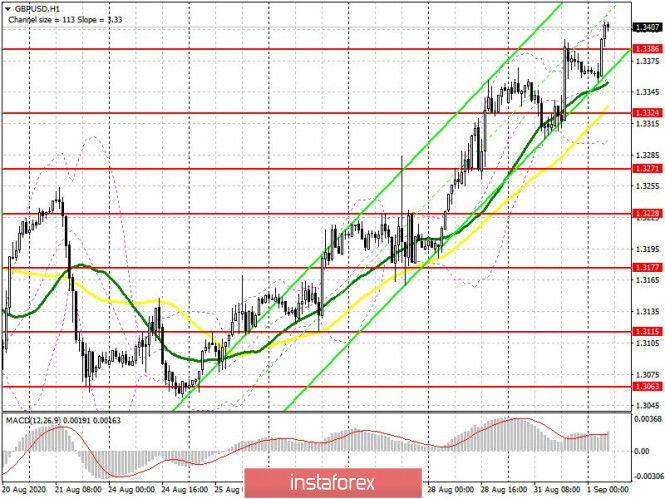 Trading is carried out above 30 and 50 moving averages, which indicates a continuation of the bull market.

In case the pound falls, support will be provided by the lower border of the indicator at 1.3305, from where you can open long positions immediately on a rebound.