GBP/USD: plan for the European session on September 17. Pressure on the pound gradually returns ahead of Bank of England

No matter how buyers of the pound tried to break through the area above 1.2991 yesterday, nothing came of it, and as a result, the pair fell, which may happen again today. As many as three points of entry into short positions on the pound appeared yesterday afternoon. Two before the publication of the Fed's meeting and one after. I marked them all on the 5 minute chart. Unsuccessful attempts to break through 1.2991 and even a false breakout while testing this level from the bottom up - all these actions causes GBP/USD to smoothly return to the middle of the 1.2921 side channel, which the bulls have to fight for. A lot will depend on this level, but take your time in making decisions for longs. It is best to follow the trend and look for short entry points. If you are a convinced optimist, then I would recommend buying the pound after confidently returning to the resistance of 1.2921 and its test from top to bottom, which may occur after the Bank of England announces its decision on monetary policy. Bulls will have the main task of returning and settling above the resistance of 1.3004, which will open a direct road to the highs of 1.3103 and 1.3178, which is where I recommend taking profits.

If the pound is still under pressure, and this scenario is more likely, it is best to open long positions immediately on the rebound from the support of 1.2843, counting on a correction of 30-40 points within the day. Or you can buy GBP/USD from a weekly low of 1.2777, which keeps the pair from sharply moving down. The Commitment of Traders (COT) reports for September 8 showed a reduction in long positions, but in addition, there was an even larger drop in short positions, which indicates profit taking after a fairly large bear market that we saw recently. It is also evidence that further downside momentum may start to gradually slow down, but much will depend on the terms of the Brexit deal. Short non-commercial positions decreased from 42,901 to 33,860 during the reporting week. Long non-commercial positions slightly fell from 49,213 to 46,590. As a result, the non-commercial net position increased to 12,730 against 6,312 a week earlier. 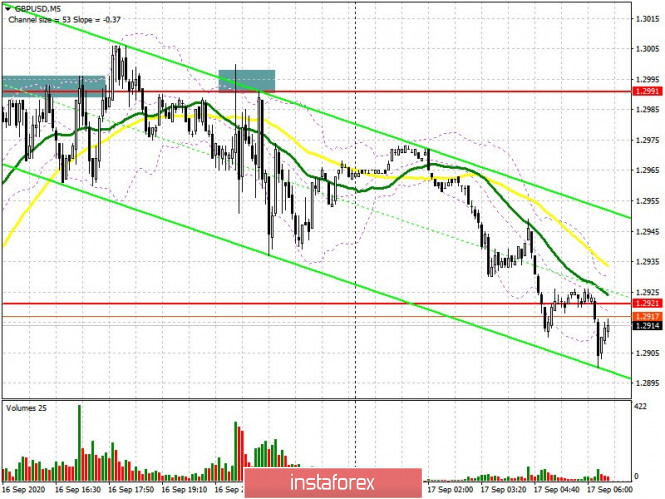 Bears urgently need to return to the 1.2921 level, but you can only open short positions from there after testing it from the bottom up. A lot will depend on how the market reacts to the Bank of England's decision. If no new support measures are announced, the pressure on the pound could increase. In this case, the bears will mainly aim for GBP/USD to return to major support at 1.2843, where I recommend taking profits. Resilient sellers will stick around until the weekly low of 1.2777 has been tested, where the main struggle with the trend direction will unfold. Bulls could return to the market if we receive positive news related to the scandalous Brexit bill. In this case, I do not recommend rushing with short positions. It is best to wait for the resistance test at 1.3004 and a false breakout to form there, counting on a correction of 30-40 points within the day. Larger sellers will only announce themselves after the high of 1.3103 has been updated. 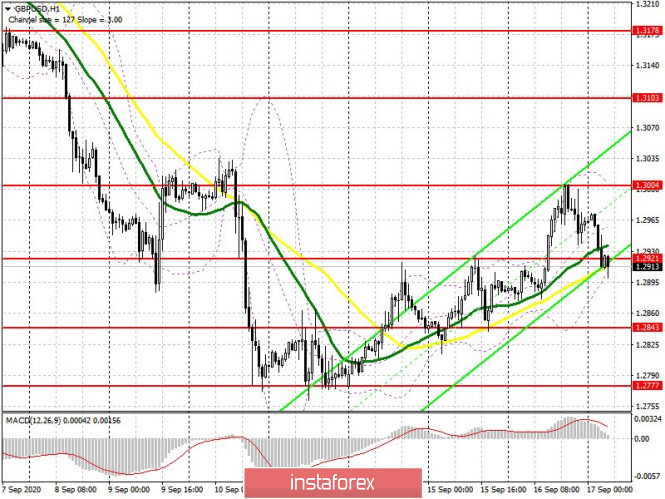 Trading is carried out in the area of 30 and 50 moving averages, and it is difficult to say who will be the winner in the short term.

Interesting? Write a comment below.
 #GBP/USD: plan for the European session on September 17. Pressure on the pound gradually returns ahead of Bank of England
Forward 
Backward 