GBP/USD: plan for the European session on September 18. Bank of England's decisions did not affect the pound. COT reports.

After some good longs in the British pound, which brought some profit, I paid attention to the likelihood of short positions in my afternoon review after returning and testing resistance at 1.2921 on the opposite side, which happened. On the 5-minute chart, you can see how the bears updated this level, but, unfortunately, the downward movement did not take place, although the entry point was just excellent. It is not entirely clear why the pound sharply grew by almost 80 points in five minutes, but it's what we have. Today, the buyers will focus on the resistance level of 1.2996, and consolidation above this range forms a good entry point into long positions in the hopes of continuing the bull market and updating the high of 1.3089, which is where I recommend taking profits. Persistent bulls will wait for a test of the 1.3178 area, but this is more like a dream, since such a movement requires positive Brexit news. In case the pair falls in the first half of the day, you can count on long positions from support at 1.2867 counting on a correction of 30-40 points within the day.

The Commitment of Traders (COT) reports for September 8 showed that long positions decreased, but there was an even larger drop in short positions, which indicates profit taking after a fairly large bear market that we saw quite recently. This is also evidence that downward momentum in the long term may start to gradually slow down, but much will depend on the terms of the Brexit deal. Short non-commercial positions dropped from 42,901 to 33,860 during the reporting week. Long non-commercial positions fell just slightly, from 49,213 to 46,590. As a result, the non-commercial net position increased to 12,730 against 6,312 weeks earlier. Sellers of the pound need to do everything to prevent the pound from going beyond the weekly high, or else they will completely lose control of the market. Therefore, forming a false breakout at the 1.2996 level will be a signal to open short positions in the hopes of falling towards the support area of 1.2867, which is where I recommend taking profits. Persistent sellers will still be looking for an update to their monthly lows in the 1.2777 area. Testing this level will mark the beginning of a new downward trend for the pair. In case GBP/USD grows in the first half of the day on very bad data on the volume of retail sales in the UK, I recommend postponing short positions and wait until the high of 1.3089 has been updated, where you can sell the pound immediately on a rebound, counting on a 30-40 point correction day. 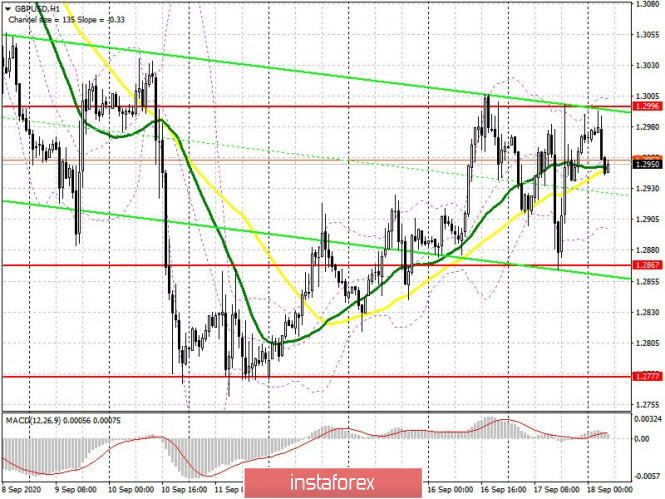 Trading is carried out in the area of 30 and 50 moving averages, and it is difficult to say who will be the winner in the short term.

Interesting? Write a comment below.
 #GBP/USD: plan for the European session on September 18. Bank of England's decisions did not affect the pound. COT reports.
Forward 
Backward 