GBP/USD: plan for the European session on September 22. COT reports. Pound sellers are one step away from renewing a new

If we had problems with selling the British pound in the morning, then the signals to which I mentioned in the afternoon made it possible for us to take a piece of profit from the market. Let's take a look at the 5-minute chart and see where you could enter the market. Recall that in yesterday's forecast, I drew attention to selling the pound after a breakout of the 1.2867 level and testing it from the bottom up, which happened. But, even if you did not have time to enter when this range was initially updated, you could have taken advantage of this chance a second time, which led to a sharper fall towards the low of 1.2777, where I recommended buying the pound immediately on the rebound, and also enabled us to catch around 40 points from the market. Bulls need to regain resistance at 1.2867 at the moment, since this will reduce the pressure on the pound. Consolidating above this range, where the moving averages, playing on the side of sellers, are also forming a signal to buy GBP/USD with the main goal of rising towards yesterday's resistance at 1.2962, which is where I recommend taking profits. If the pound is still under pressure, and most likely it will be, buyers will need a lot of strength to protect support at 1.2777. Forming a false breakout there, along with confirming the divergence on the MACD indicator, produces a signal to buy the pound. If no one is active, I recommend postponing long positions until the new lows of 1.2725 and 1.2675 are updated and then you can think about long positions, counting on a correction of 30-40 points within the day.

Let me remind you that the Commitment of Traders (COT) reports for September 15 showed a reduction in long positions and a large increase in short positions, which indicates market expectations and a high possibility that the pound will fall in the long term, which may be due to uncertainty regarding the conclusion of the Brexit trade deal. And if last week, it was possible to say that the downward momentum may start to gradually slow down, which the market showed us, now the situation is on the side of the pound sellers once again and the pair may succeedingly fall. Short non-commercial positions increased from 33,860 to 41,508 during the reporting week. Long non-commercial positions fell from 46,590 to 43,801. As a result, the non-commercial net position sharply fell to 2,293, against 12,730, a week earlier.

Today, we have the Governor of the Bank of England, Andrew Bailey. His statements may put pressure on the British pound. Therefore, a breakout and settling in the area below support at 1.2777 forms a good signal to sell the pound. However, it is worth paying attention to the divergence on the MACD indicator. In case GBP/USD does not quickly move after settling below the 1.2777 level, it is best to slow down with short positions at the lows and wait for an upward correction in the pair. New areas 1.2725 and 1.2675 will be the bears' main target, which is where I recommend taking profits. If GBP/USD rises in the first half of the day, and this scenario is more acceptable for opening short positions, it is best to wait until resistance is updated at 1.2867 and sell the pound there immediately on a rebound, expecting the resumption of the bear market. The moving averages, which pass slightly above this range, will also come to the rescue. In case bears are not active at 1.2867, it is best to refuse to sell until the 1.2962 high is updated while aiming for a downward correction of 30-40 points within the day. 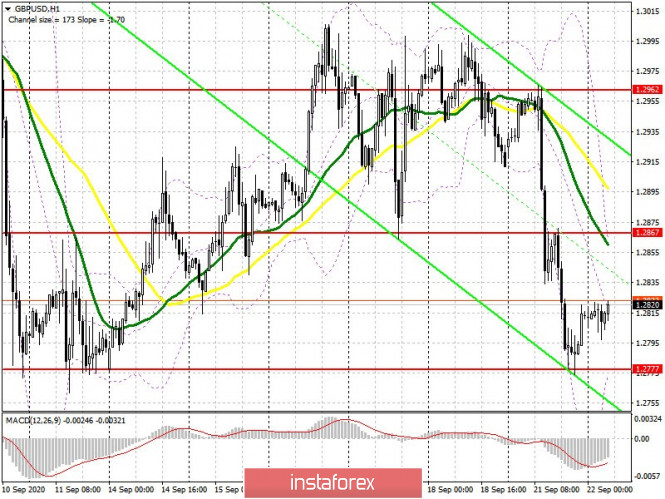 Trading is underway below 30 and 50 moving averages, indicating a renewed bearish trend.

Interesting? Write a comment below.
 #GBP/USD: plan for the European session on September 22. COT reports. Pound sellers are one step away from renewing a new
Forward 
Backward 