In yesterday's review, I drew attention to placing buy positions on the pound above 1.2714, returning to which occurred in the middle of the European session. I also said that you can take your time, but wait until support at 1.2714 has been tested from the reverse side, those from top to bottom. Let's take a look at a 5-minute chart. We see how the bulls quickly returned to the market when the 1.2714 level was reached, which resulted in a powerful upward momentum for the pound, thereby rising to the resistance area of 1.2782, to which we literally fell short of almost seven points. In total, the upward movement was about 60 points, which is pretty good. 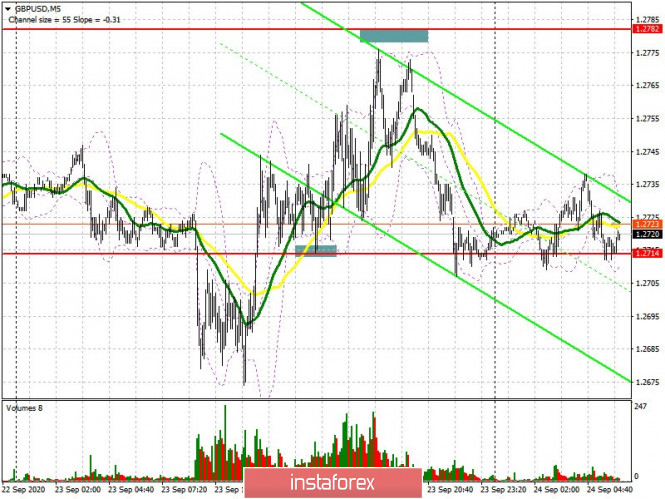 Bulls currently need to defend the 1.2709 area, because a lot depends on it. Forming a false breakout at the 1.2709 level will be a signal to open long positions while expecting an upward correction to the resistance area of 1.2772. However, you can only count on succeeding growth if we receive positive news on Brexit, since it is unlikely that today's speech from the governor of the Bank of England will be able to support the pound, and we also do not have other UK fundamental data for the day. Settling above 1.2772 will be the entry point into long positions on GBP/USD with the main goal of moving towards the high of 1.2816. A large resistance at 1.2863 will be a distant goal, which is where I recommend taking profits. In case the pair falls below the 1.2709 level, and this is more likely, it is best not to rush to buy the pound, but wait until the next low of 1.2645 has been updated, or buy GBP/USD even lower, immediately on a rebound from support 1.2585, counting on a correction of 30- 40 points within the day.

Let me remind you that the Commitment of Traders (COT) reports for September 15 showed a reduction in long positions and a large increase in short positions, which indicates market expectations and a high possibility that the pound will fall in the long term, which is probably due to uncertainty regarding the conclusion of the Brexit trade deal. And if last week, it was possible to say that the downward momentum may start to gradually slow down, which the market showed us, now the situation is on the side of the pound sellers once again and the pair may succeedingly fall. Short non-commercial positions increased from 33,860 to 41,508 during the reporting week. Long non-commercial positions decreased from 46,590 to 43,801. As a result, the non-commercial net position sharply fell to 2,293, against 12,730, a week earlier.

Bank of England Governor Andrew Bailey is set to deliver a speech again today. We all remember his recent statements about the high likelihood of negative interest rates, which put sharp pressure on the pound. The GBP/USD pair may continue to fall today if Bailey mentions this problem again. There is also Brexit and the growth of coronavirus infection. In general, everything plays on the side of the pound sellers. Bears need a breakout of support at 1.2709 in the first half of the day, consolidation below which will open a direct way for the pound to a low of 1.2645, and the 1.2585 area will be a distant goal, which is where I recommend taking profit. In the event of an upward correction in GBP/USD, I recommend not to rush in selling, but wait for a false breakout in the resistance area of 1.2772, just below which the moving averages pass. It is possible to open short positions immediately on a rebound from a larger resistance in the 1.2816 area, counting on a correction of 30-40 points within the day. 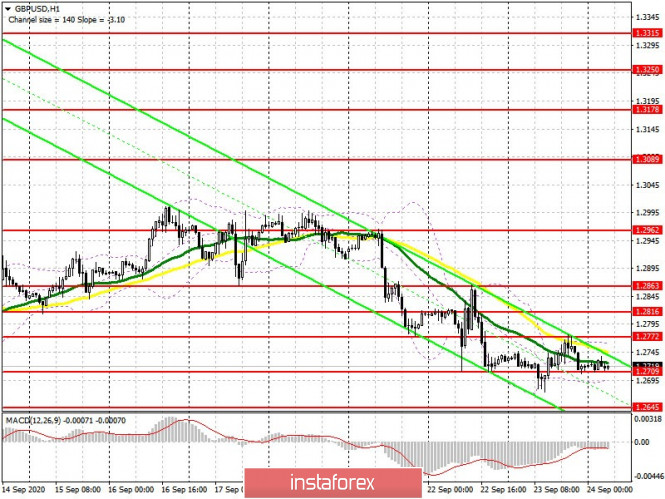 Trading is carried out below 30 and 50 moving averages, which indicates a continuation of the bearish trend.