GBP/USD: plan for the European session on September 29. COT reports. Pound rose due to Brexit rumors, but could also quickly

The pound sharply grew yesterday morning, due to rumors that the UK and the EU might reach a compromise on the trade deal, however, it was difficult to enter the market, since there were no convenient entry points. It was only possible to observe active development of the situation in the afternoon, at the 1.2863 level which we will now talk about. I recommended opening long positions from this level in the event of a decline and a false breakout there, which happened. On the 5-minute chart, we can see how the bulls defended support at 1.2863 with all their might, making several active attempts to resume the pound's growth, but they gave up and retreated from the market on the third test, thereby forming a new signal to sell the pound. A reverse test of the 1.2863 area is a good short entry point, bringing in about 40 points in profit. 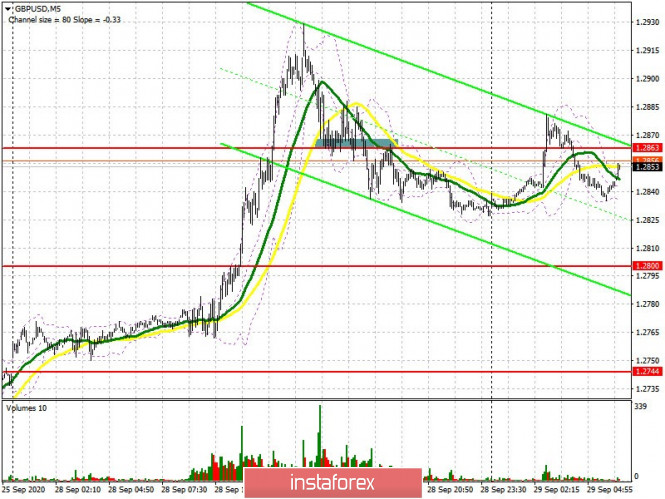 The situation has completely changed at the moment. Buyers will wait for a breakout and settle above the resistance of 1.2885, which will form a new signal to enter long positions with the main goal of updating a new high for this week in the 1.2962 area, which is where I recommend taking profits. The 1.3089 area will be a distant goal, and this is a very difficult target to achieve. In case the pound falls, forming a false breakout at the 1.2834 level will be a signal to open long positions. In case bulls are not active in this range, it is better to postpone longs until a larger low of 1.2766 has been updated, slightly above which the moving averages pass, playing on the side of the bulls. It is also possible to buy GBP/USD immediately on a rebound from the monthly low of 1.2689, counting on a correction of 30-40 points within the day.

Sellers can quickly regain control of the market if yesterday's rumors and conversations are not reinforced. To do this, we need a breakout and have to settle below support at 1.2834. Testing this level on the reverse side forms a good entry point for short positions, which will quickly extinguish buyers' optimism and lead to an update of the first support level of 1.2766, which is where I recommend taking profits. The 1.2689 area will be a distant goal, testing it will mean the resumption of the bearish trend for the pound. If GBP/USD continues to grow, and this cannot be ruled out in the current conditions, then it is best not to rush to sell, but wait for a false breakout to appear in the resistance area of 1.2885. Selling the pair immediately on a rebound is only possible when the weekly high is updated in the 1.2962 area, counting on a correction of 30-40 points within the day. 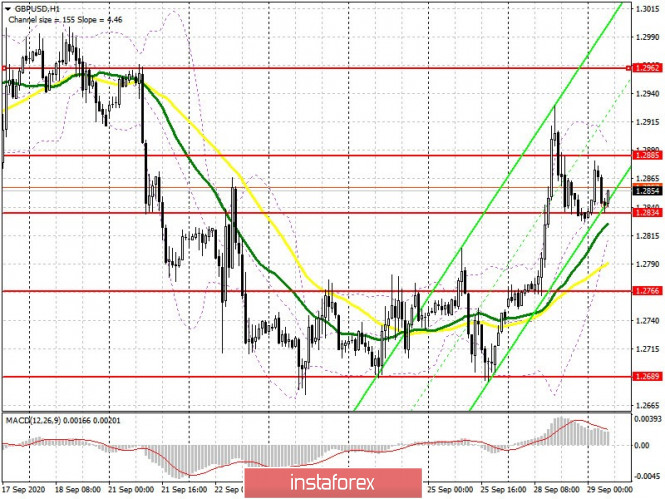 Trading above 30 and 50 moving averages, which indicates the likelihood of a continuation of the upward correction for the pound.

Interesting? Write a comment below.
 #GBP/USD: plan for the European session on September 29. COT reports. Pound rose due to Brexit rumors, but could also quickly
Forward 
Backward 