GBP/USD: plan for the European session on September 30. COT reports. Pound unbothered by the adoption of UK Internal Market

News that the British Parliament had approved the Internal Market Bill only led to a small spike in volatility, but the pair remains in a horizontal channel. Thanks to this, several more signals for entering the market appeared. Yesterday morning, a fairly good signal for buying the pound from the 1.2834 level appeared on the 5-minute chart. The pair increased to 1.2885 and the pound gained around 50 points. This was followed by short deals from 1.2885, which subsequently brought the pound back to 1.2834. Forming a false breakout at this level led to new long deals in GBP/USD, which is clearly seen on the chart. 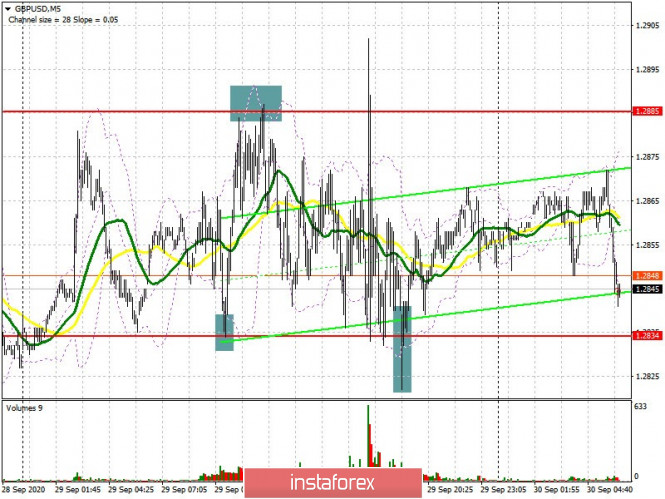 The current situation has not changed in any way compared to the previous day. Buyers will wait for a breakout and settle above the resistance of 1.2885, which will form a new signal to enter long positions with the main goal of updating this week's high in the 1.2962 area, which is where I recommend taking profits. The 1.3089 level will be a distant target, but this is very difficult to achieve. UK GDP data for the second quarter will provide support, although we don't expect much from it. In case the pound falls, forming a false breakout at the 1.2834 level will be a signal to open long positions. In case bulls are not active in this range, it is better to postpone long deals until a larger low at 1.2766 has been updated, slightly above which the moving averages pass, playing on the side of the bulls. It is also possible to buy GBP/USD immediately on a rebound from the monthly low of 1.2689, counting on a correction of 30-40 points within the day.

A lot will depend on how the EU reacts to the UK's draft Internal Market Bill, which was adopted yesterday. The pound will be under pressure if Brussels resorts to the promised political measures, allowing sellers to quickly regain control of the market. From a technical point of view, they need a breakout and have to settle below support at 1.2834. Testing this level on the reverse side forms a good entry point for short positions, which will quickly extinguish buyers' optimism and cause the first support level of 1.2766 to be updated, where I recommend taking profits. The 1.2689 level will be a distant target, testing it implies bringing back the bearish trend for the pound. If GBP/USD continues to grow, then it is best not to rush to sell, but wait for a false breakout to form in the resistance area of 1.2885. It is possible to sell the pair immediately on a rebound only when the weekly high has been updated in the 1.2962 area, counting on a correction of 30-40 points within the day. 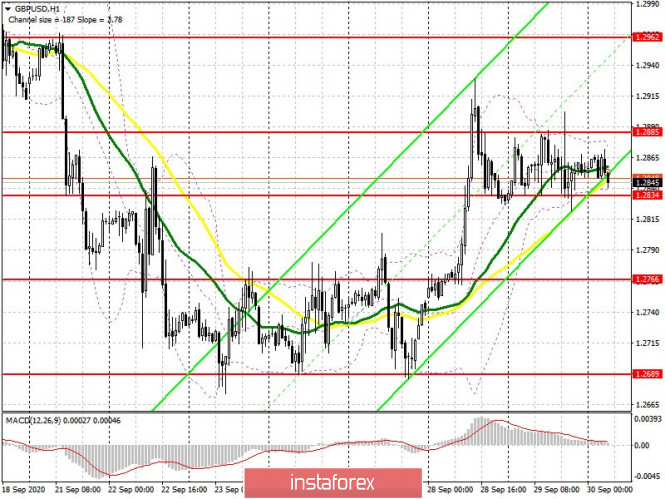 Trading is carried out in the area of 30 and 50 moving averages, which indicates uncertainty regarding the direction.